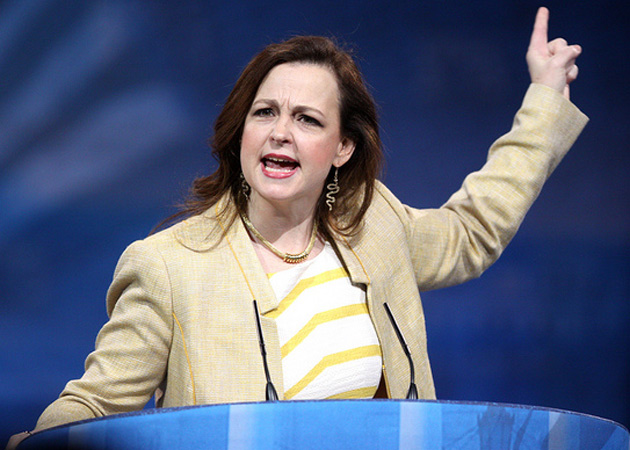 Tea Party Patriots cofounder Jenny Beth Martin has been all over the airwaves since the IRS story broke, talking about how her group was among those whose applications for nonprofit status were unfairly targeted for extra scrutiny. She has called the IRS’s actions a “disturbing, illegal, and outrageous abuse of government power.” She told Fox News that Tea Party Patriots wants the agency repay it for expenses it incurred as a result of the “intrusive” questions it asked, including requests for “every single post on Facebook” and “every comment that any person who’s a fan of ours on Facebook had ever made.” On Friday, lawyers for her group sent a letter to the IRS alerting the agency to coming lawsuits over its “illegal” conduct.

But while the IRS has admitted to unfairly targeting some conservative groups, Tea Party Patriots, a national umbrella organization for the grassroots movement, may not have been one of them. As I reported last week, although IRS officials engaged in misconduct, they also may have had good reason in some cases to scrutinize groups whose financial and tax histories raised questions, including Tea Party Patriots. The group engaged in a type of creative accounting that the IRS said it specifically planned to crack down on, and TPP drew criticism from some of its own constituents for a lack of financial transparency. Moreover, the IRS received a formal complaint about TPP—when I filed one in 2011 after the group refused to provide me with a financial disclosure required by law.

When I first started covering the tea party movement in mid-2009, TPP had quickly emerged as one of its biggest players. It began in February 2009 as a loosely organized group of activists, officially incorporating that June as a self-identified 501(c)4 tax-exempt organization. (Nonprofits can self-designate their status even before applying officially with the IRS.) The group got heavily involved in the 2010 midterm elections: In September 2010, TPP announced that it had been given a $1 million anonymous donation to “get out the vote” during the campaign, while another wealthy anonymous donor—whom I later identified as conservative Montana millionaire Raymon Thompson—lent the group’s leaders his private jet. (See this video of Martin and TPP cofounder Mark Meckler jetting around the country to rally the tea party troops just ahead of the election.)

The IRS responded that it had no record of Tea Party Patriots being an exempt organization, and no 990 form from the group.

Despite evidence that lots of money was pouring into the organization, TPP had disclosed little about its internal finances; its own members began complaining about the jet, hotel, and travel costs its leaders were running up, and a lack of transparency. Rhode Island tea party activist Marina Peterson told me then that the large anonymous donation troubled her, especially because she had no idea what the national leaders were doing with it. “How do we know we want to take that money if we don’t know who the person is?” she asked. “What if it was George Soros?”

A few days after the 2010 election, I asked the IRS for a copy of TPP’s 990 form, an annual reporting return for nonprofits. The form is a significant window into a nonprofit’s finances, showing how much money it raised, how some top employees were compensated, and how much of its budget went to its social-welfare mission. Under standard nonprofit practices, the return should have been filed by November 2010 in TPP’s case.

In January 2011, the IRS responded that it had no record of TPP being an exempt organization, and no 990 form from the group. I inquired with TPP about this and asked for a copy of the return. Randy Lewis, then a spokesman for the group, told me that the application for nonprofit status was still being prepared and that the 990 form would be available after April 15. (Alan Dye, the lawyer who handled TPP’s nonprofit application told me last week that TPP had in fact filed its application in December 2010. He says that the IRS neglected the application for a few months before they began processing it. He says TPP’s application still hasn’t been approved.)

When tax day in April 2011 rolled around, I once again asked TPP for a copy of its 990 form, which is required by the government even if the group’s nonprofit application is still pending. I made several phone and email requests to the group’s leaders, all of which they ignored. At the end of that May, I filed a formal complaint with the IRS office in Dallas that handles issues with exempt organizations. I also faxed a letter with a copy of the complaint to Lois Lerner, the currently embattled head of the IRS’s Exempt Organizations Division.

Then, out of the blue in July 2011, Dye’s office finally sent me a copy of TPP’s completed form—for tax year 2009. Signed by a tax preparer on February 12, 2011, it covered the period between June 2009 and May 2010. TPP had set its fiscal year to end May 31, a move that allowed it to avoid publicly disclosing the results of months of fundraising in the run-up to the 2010 elections—which fed into a total haul of more than $12 million—for another full year.  By comparison, the North Houston Tea Party, which was started around the same time as TPP in 2009, and which prided itself on making all of its financial information public, filed its 990 form for 2009 nearly a year before TPP, in June 2010, with its fiscal year ending December 31, 2009.

Technically TPP’s move was legal, and not an uncommon practice—but the IRS had become focused on stopping it. Marcus Owens, a DC tax lawyer with the firm of Caplin & Drysdale, who served for 10 years as the director of the Exempt Organizations Division, told me back then that shifting the tax year is an old trick used by political groups to delay disclosure. He said the IRS had made one of its goals for 2011 to crack down on this type of foot-dragging by nonprofits in light of all the anonymous money flooding the political system after the Supreme Court’s Citizens United decision. This was another reason that the IRS might have flagged TPP’s nonprofit application for further review.

Diligent tea party groups that played by the book may well have been unfairly targeted by the IRS. But a thorough investigation of what happened would also account for whether some groups deserved to be put under a microscope. TPP’s Martin and others who are now loudly protesting that they’ve been persecuted may not be so happy about what else might come to light as a result of further investigation.