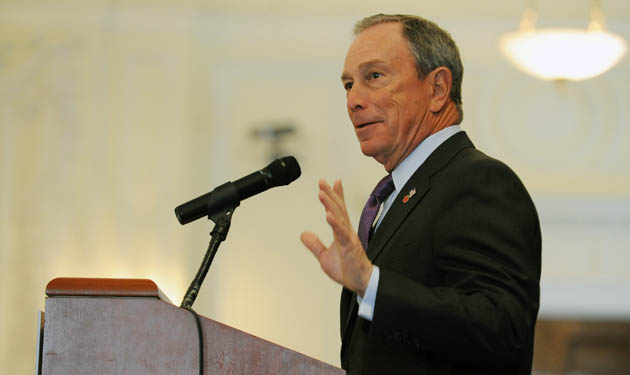 A quarter of New York City could be a flood zone by 2050, according to a new report commissioned by the Bloomberg administration. On Tuesday, Bloomberg laid out an accompanying $20 billion plan to fortify the city against future disasters brought on by climate change.

Many of the Bloomberg administration’s recommendations would take years to carry out, far longer his remaining 11 months of tenure as mayor. The 440 page plan covers everything from the protecting coastline with levees to improving emergency bus routes. Neighborhood by neighborhood, it lists recommendations for the city: building dunes to help fortify the Rockaways, offshore breakwaters to temper big waves (and provide habitats for oysters) in Staten Island, and a new, above sea-level neighborhood dubbed “Seaport City” in southeast Manhattan, among others. Bloomberg estimates that $15 billion of the $20 billion in funds can come from already existing city and federal money, and said that “we’ll press the Federal government to cover as much of the remaining costs as possible.”

Hurricane Sandy revealed how vulnerable New York is to extreme weather. The city has more than 600 miles of coastline and last summer Sandy—870 nautical miles across by the time it reached landfall—cost a total of $19 billion. According to the scientists’ projections, the sea level will rise by 1-2.5 feet, and storm surges will be 5 feet higher, by mid-century. Heat waves, heavy downpours, and coastal flooding are also expected to become more frequent and more intense.

In the wake of Hurricane Katrina, the Army Corps of Engineers used $15 billion in funds to re-build its storm-protection system, according to Discovery. That included 350 miles of levees and floodwalls to protect the city and a massive drainage pumping system. Strategies from Bloomberg’s proposal such as rebuilding wetlands, which are natural buffers for climate change, weren’t part of New Orleans’ plan, nor were many of the other preventative measures that Bloomberg is proposing.

Regardless of what happens with Bloomberg’s climate change proposal, New Yorkers struggling to rebuild after hurricane Sandy—not to mention those worried about the hurricane season to come—will be dealing with new climate change policy in the coming years. Draft flood maps released by FEMA this week more than double the number of people living in flood zones to around 400,000. Home-owners in high risk zones may be required to elevate their houses with poles or otherwise flood-proof them, and under an act passed by Congress last summer, property owners in flood zones that have been paying low, grandfathered rates on insurance will see their rates rise in the coming years, possibly by thousands of dollars.