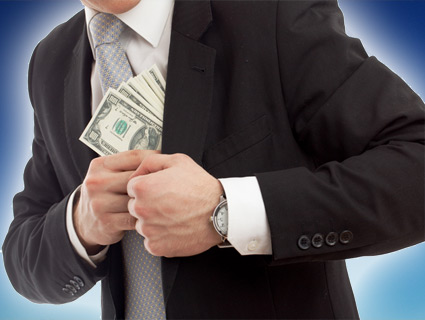 In April, I reported on an investigation out in California into the source of a mysterious $11 million donation that the state elections watchdog called “the largest contribution ever disclosed as campaign money laundering in California history.” That $11 million donation, made in October 2012 by a little-known nonprofit called Americans for Responsible Leadership, went toward defeating Proposition 30, which would have raised taxes on wealthy Californians, and passing Proposition 32, which would have curbed unions’ campaign spending. But when the California Supreme Court intervened, we learned that money didn’t originate with Americans for Responsible Leadership, but rather from a different nonprofit based in Virginia called Americans for Job Security. Conservatives worried, as I reported, that the probe into the true source of the $11 million might cast unwanted light on all the dark money sloshing around conservative politics.

Now, the plot thickens. Writing for the Daily Beast, Peter Stone reports that a grand jury has been convened in California’s dark-money investigation. Stone notes that the existence of a grand jury likely means the state’s probe is intensifying as it tries to unmask the true source of that $11 million donation, be it a single wealthy donor, several individual donors, a company, etc.

Stone also reports that billionaire investor Charles Schwab or an entity affiliated with Schwab has received a subpoena as part of the California probe. In November 2011, Mother Jones reported that Schwab was part of a club of donors who’d given more than $1 million to groups and causes backed by Charles and David Koch. A spokesman for Schwab did not comment for Stone’s story.

The stakes of California’s investigation are very high, as Stone notes:

If prosecutors do move forward, their investigation could shine light on parts of the burgeoning network of conservative “social welfare” outfits that spent hundreds of millions in the last two elections. Under IRS rules, social-welfare groups can engage in political activities so long as that work is not their primary purpose, a loosely enforced rule often interpreted to mean that 49 percent of a group’s spending can go toward political work.

One of the three groups that allegedly channeled the funds to California was the Arizona-based Center to Protect Patient Rights, founded in 2009 by Koch operative Sean Noble, who has emerged in recent cycles as a big player in conservative political and fundraising circles. Noble has spoken at least twice at the billionaire brothers’ biannual conferences aimed at tapping other wealthy conservatives for their favorite projects, and he has been a key strategist at small Washington meetings with other GOP allied groups such as the Karl Rove-founded American Crossroads.

“Sean is the wizard behind the screen” for the Kochs and their network of wealthy donors, said one GOP operative familiar with Noble’s political work.

In 2010 and 2012, Noble’s Center appeared to act mainly as a cash conduit, shipping millions to allied conservative groups. In the 2010 cycle, for instance, it channeled almost $55 million—a sum almost identical to its revenues—to a couple dozen conservative bastions including Americans for Tax Reform and the American Future Fund, according to the group’s filings with the IRS. Most of that largess went to pay for advertising backing GOP candidates or attacking Democrats.

“We had no involvement whatsoever, financial or otherwise, neither directly nor indirectly, on anything to do with Prop. 30 or Prop. 32,” a spokesman for Koch Industries, Rob Tappan, said in an email. Tappan, however, indicated he spoke only for Koch and not “independent entities,” such as Noble’s Center. Asked if the Kochs had received subpoenas from the grand jury, Tappan said it was company policy not to comment on “the existence or nonexistence of investigations.” Noble did not return phone calls seeking comment.

Officials with California’s Fair Political Practices Commission and the state AG’s office have refused to comment on the progress of their probes. But in a brief interview in April, Ann Ravel, the chairwoman of the FPPC, said she fully intends to find out who truly was behind that $11 million. “The most important factor of any investigation of this sort is getting the names of who’s contributing to campaigns in California,” she said. “Because that’s the law.”