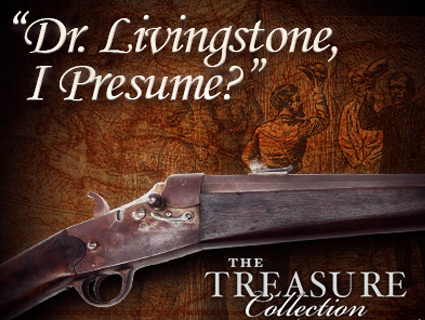 In addition to fighting furiously to keep guns in our warm, live hands, the National Rifle Association celebrates guns pried from cold, dead hands in its National Firearms Museum, “one of the world’s finest museum collections dedicated to firearms.” The museum’s Treasure Collection includes everything from Annie Oakley’s guns to Dirty Harry’s Smith & Wesson. Another item in the trove, which the NRA tweeted about yesterday, is an elephant rifle that belonged to Henry Morton Stanley, the 19th-century British American journalist and “explorer” who marauded through east, southern, and central Africa.

The 22-pound rifle, which fired a quarter-pound of lead with each shot “was considered heavy artillery,” explains NRA museum senior curator Doug Wicklund in the clip above. With it, Stanley shot 16 elephants during his 1871 trek in search of the missionary and doctor David Livingstone. Yet the NRA doesn’t mention that when he wasn’t shooting charismatic megafauna with his elephant guns, Stanley was shooting people with them.

As Stanley related in his own accounts, he repeatedly used his big guns to intimidate and kill people he encountered on his African travels. Here’s how he dealt with some of the “savages” who got in the way of his trans-continental journey in 1875:

I discharged my elephant rifle, with its two large conical balls, into their midst…My double-barreled shotgun, loaded with buckshot, was next discharged with terrible effect, for, without drawing a single bow or launching a single spear, they retreated up the slope of the hill…

Twice in succession I succeed in dropping men determined on launching the canoes, and seeing the sub-chief who had commanded the party that took the drum, I took deliberate aim with my elephant rifle at him. That bullet, as I have since been told, killed the chief and his wife and infant, who happened to be standing a few paces behind him, and the extraordinary result had more effect on the superstitious minds of the natives than all previous or subsequent shots.

On getting out of the cove we saw two canoes loaded with men coming out in pursuit from another small cove. I permitted them to come within one hundred yards of us, and this time I used the elephant rifle with explosive balls. Four shots killed five men and sank the canoes.

The final body count of this incident, Stanley claimed, was 14 dead and 8 wounded, presumably including the baby and its mother. Due to tales such as this, Stanley gained a reputation for indiscriminate slaughter. George Bernard Shaw described him as a “wild-beast man, with his elephant gun, and his atmosphere of dread and murder.” Fellow expeditionist Richard Burton observed, “Stanley shoots negroes [sic] as if they were monkeys.” Though the elephant gun in the NRA’s collection is likely not the one fired in the passage above, it’s not surprising that the gun lobby isn’t volunteering the larger story behind the trigger-happy owner of this “special treasure.”