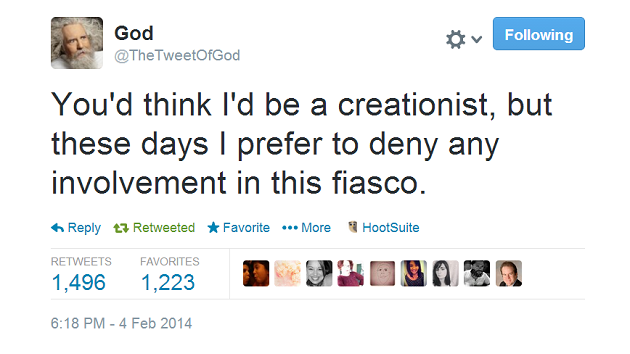 They warned Bill Nye not to do it. Not to go into the hokey museum of the America’s leading Young Earth creationist, Ken Ham of Answers in Genesis, and try to reason with the guy.

Evolution defenders have long turned down such high-profile public debates, of the sort that creationists yearn for. The logic is simple: It puts creationism on an equal footing with real science; and once you’ve done that, the creationist has already, in effect, won.

But something funny happened on the way to disaster last night at the Creation Museum in Kentucky. Sure, creationist leader Ken Ham got the opportunity to appear before a huge audience (some 750,000 people were tuned in simultaneously at one moment in the debate; the total number of viewers is surely much higher). He got to show he was likable, and play a lot of well-produced videos featuring people with Ph.D.s or scientific training who nonetheless embrace creationism. In all likelihood, then, Ham gained some followers last night. And he definitely got some priceless advertising for his museum.

Yet it came at the cost of being trounced by Nye, who managed to show not only how downright absurd Young Earth creationist beliefs are (noting, for instance, that there is a 9,550-year-old tree in Sweden that is itself several thousand years older than Ham thinks the Earth is), but to demonstrate the extreme nature of Ham’s brand of creationism. In one of the best lines of the night, Nye emphasized that “billions” of religious people around the world accept science, adding, “the exception is you, Mr. Ham.”

Most of all, Nye allowed Ham to undermine himself before the audience. By in effect preaching, rather than sticking to scientific assertions, Ham demonstrated what we’ve always known about creationism, and what many canny anti-evolutionists have sought to conceal: It’s a religious doctrine, not a scientific one. When asked what kind of evidence would change his mind in the question and answer phase of the debate, Ham basically had no answer. “The answer to that question is, I’m a Christian,” said Ham. “And as a Christian, I can’t prove it to you, but God has definitely shown me very clearly through his word, and shown himself in the person of Jesus Christ, the Bible is the word of God. I admit that that’s where I start from.”

The picture of a dogmatist, holding out against all evidence for an Earth that’s somehow supposed to be only a few thousand years old, where somehow all plant life survived being inundated for months by Noah’s flood, shone through.

To be sure, it wasn’t all smooth sailing for Nye, who in his 30-minute presentation at the outset of the debate laid out a host of facts and scientific details (about the ages of limestone, bristlecone pine trees, air trapped in ice cores, and much else) without articulating a clear message. Early in the debate, Nye’s strategy seemed to be to simply show why Ham’s brand of creationism is intellectually absurd, even as Nye himself played the role of a “reasonable man” (a phrase he repeated often) who found it all just too much to swallow.

Yet this approach likely failed to touch the audience emotionally by showing, for instance, what a threat creationism is to our kids’ education, and what an affront it is to the many serious religious believers around the world who don’t see any need to pit science and faith against each other. Instead, Nye piled on facts. Or as the moderator, CNN’s Tom Foreman, put it when Nye finished, “That’s a lot to take in.”

But as the evening wore on, Nye proved he was better off the cuff than when he was formally presenting. And he started to land a different sort of punch, repeatedly emphasizing the threat to US competitiveness from creationism-infused education, and Young Earth creationism’s exclusionary nature. “There are billions of people around the world who are religious and accept science,” Nye emphasized repeatedly. Meanwhile, Ham appeared increasingly dogmatic, simply banishing from the realm of “observational science” (as he defined it) anything that would tell us how old the Earth is, or what happened there before modern humans could directly observe it.

And then, well, there were the lions. Ham’s particular theology requires him to believe that before Noah’s flood, all the animals were vegetarians. “I have not spent a lot of time with lions, but I can tell they have teeth that really aren’t set up for broccoli,” Nye countered.

Brian Malow, the science comedian, had fun with this one:

Hey, man, some of my best friends are vegetarian lions. #creationdebate

In the end, the most important thing about this debate, which drew dramatic attention, is that it was thoroughly disruptive of the evolution-creationism status quo. We’ve been in a rut in this battle for too long, with school boards and lawmakers continuing their stealth anti-evolution attacks (rarely admitting, as Ham so plainly did, that they’re driven by religion) even as scientists wring their hands about American anti-intellectualism from the safety of their college towns.

Last night, in contrast, it all hung out. We saw what Young Earth creationists really, really think. They believe in vegetarian lions and an Earth younger than its oldest-living tree. And for most Americans, there’s just no way that makes any sense.