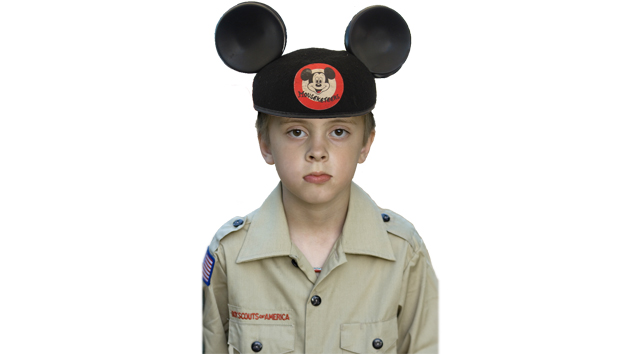 Walt Disney has booted the Boy Scouts out of the Magic Kingdom, allegedly due to the national organization’s discriminatory policies against gay members. Although the Boy Scouts began welcoming gay scouts in January, it dispels these members after they turn 18, banning them, as well as gay parents, from leading troops and packs. Florida-based Walt Disney World, the latest company to stop giving money to Boy Scouts in recent years, said that it cut off funding because the organization’s “views” do not align with theirs, according to a letter sent from the Central Florida Council of the Boy Scouts of America (BSA) to the state’s scout leaders and parents.

“In losing this grant money…we may have to cut back on activities, delay replacing aging equipment, or reduce ‘high-adventure’ camping. Unless the families can make up the difference, we will have reduced experiences for the boys available,” said a Florida pack and troop leader, who wished to remain anonymous because of potential retaliation from the local scouting community. “My kids are losing money solely based on National BSA’s moral judgment against gay people. It’s not what I believe or teach my kids. Discrimination is not what we practice as a local scout unit.”

Walt Disney World did not provide financial support to the national BSA council, but it did give grants to local scouting troops through a program called, “Ears to You,” in which employees do volunteer work, and, in return, the company gives money to a charity of the employee’s choice. The Florida scout leader told Mother Jones that many members of the Florida scouting community participate in this program, and some units were receiving up to $6,000 per year.

According to the letter sent by the BSA Central Florida Council, the national leadership of BSA reached out to Walt Disney World to address the dropped funding, but the company said that their “views do not currently align with the BSA and they are choosing to discontinue this level of support.” Walt Disney World did not respond to comment as to whether those views specifically refer to the Scouts’ LGBT policy, and BSA spokesman Deron Smith declined to comment on the rationale. But Brad Hankins, a spokesman for Scouts for Equality, which advocates for equal LGBT rights, said the group believes it’s over BSA’s anti-gay policy: “Beyond the membership policies, what other views does the BSA hold that are controversial?” According to its Standards of Business Conduct, Disney World permits no discrimination based on “sex, sexual orientation [and] gender identification” among its employees.

Smith, the Boy Scouts spokesman, did confirm that Walt Disney World has suddenly stopped providing these grants. “We believe every child deserves the opportunity to be a part of the Scouting experience and we are disappointed in this decision because it will impact our ability to serve kids,” he said. Many other companies have stopped funding BSA recently over its anti-gay policy, including Lockheed Martin and UPS.

According to Zach Wahls, an Eagle Scout raised by two lesbian mothers, and founder of Scouts for Equality, it’s not the famous theme park that’s hurting the scouts—it’s the Boy Scouts’ discriminatory policies. “We’re never happy to see scouting suffer as a result of the BSA’s anti-gay policy,” he said, “but Disney made the right decision to withhold support until Scouting is fully inclusive.” The Florida scout leader agrees: “Because of the national decision to deny leadership opportunities to gay adults, my kids and other local units near Disney are penalized. If I were the decision-maker at Disney, I think I would make the same decision.”