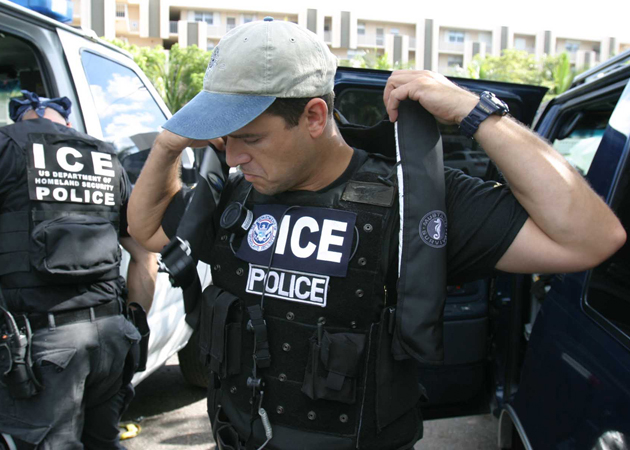 President Obama’s recent announcement that his administration would rethink its deportation policies and practices was welcome news in some quarters. But Obama’s words didn’t do much for immigrants rights activists, who have taken to calling him the “deporter in chief” and are planning a series of rallies around the country tomorrow, April 5, urging the president to suspend future deportations.

That’s because the Obama administration is either flirting with or has crossed the 2 million deportation mark. It took George W. Bush, whose administration faced greater political pressure to clamp down on immigration, nearly two full terms to reach that number; Obama hit it in slightly more than one. Here’s a brief explainer on Obama’s deportation milestone:

What exactly do we mean when we say “deportations”? The government measures deportations in two broad categories: removals and returns. Generally, removals are more serious and carry deeper legal ramifications than returns. Removals are orders issued by a judge, while returns, though also serious, are less strict and allow a person to apply to legally return much faster. (Many people caught at the border used to end up as returns, but that has changed in recent years.) So, although it can be confusing, when people talk about Obama’s record-breaking 2 million deportations, they’re really talking about removals. According to Department of Homeland Security (DHS) data, there was an average of about 40,000 removals each fiscal year from 1892 to 2008. Fiscal years 2009-12 saw an average of about 396,000. The surge in deportations came in the mid-1990s during the Clinton administration, and has been on a steady rise ever since.

How do Obama’s numbers compare to those of previous administrations? Based on the DHS data and a Bloomberg Businessweek report from late last year, the Obama administration has carried out roughly 1.8 million removals in his time in office through September 7, 2013. That’s less than George W. Bush’s overall total of slightly more than 2 million, but even conservative estimates of the number of deportations in fiscal year 2014 would have Obama crossing that mark right about now and on pace to crush it by the end of his presidency. (The number represents total removals, not the number of people removed; one person could be sent back to their country of origin several times.) 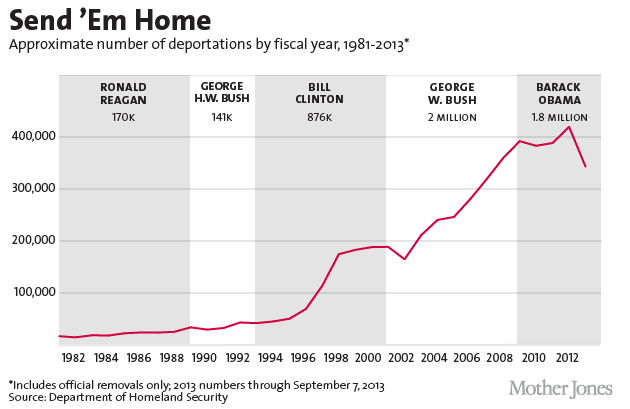 How has the removal/return breakdown changed over time? Due to shifts in immigration enforcement policies beginning in the mid-1990s, the number of removals has gone way up while the number of returns has dropped, a trend that has accelerated in a dramatic way since the mid-2000s. Removal numbers jumped in 1997 following the passage of 1996 Illegal Immigration Reform and Immigrant Responsibility Act (IIRIRA), which gave immigration officials much more power in enforcing immigration law and ultimately deporting people. For example, the government deported nearly 70,000 people from October 1, 1995, through September 30, 1996. The next fiscal year, that figure jumped to more than 114,000 and has risen steadily from there. The most recent full fiscal year of data (2012) put the total at 419,384. Incomplete data for fiscal year 2013 added another 343,000.

The 1996 law also gave immigration officials the power to review immigrants’ status and decide their fate in cases when a prior order of removal exists. In those instances, an immigration official can reinstate an order of removal without any judicial review, offering little recourse for an immigrant. The 1996 law also created the legal framework for the 287(g) program, which allows state and local law enforcement to enforce federal immigration laws. In 2005, the federal government introduced “Operation Streamline,” which allowed immigration courts to hear and decide the cases of dozens of immigrants at a time.

The effect of these escalating policies, among others, has created an environment in which it’s easier for an immigrant to qualify for a removal versus a return, and easier for the government to choose that route, says Ben Winograd, an immigration attorney at the Immigrant & Refugee Appellate Center. “In terms of how immigration enforcement is carried out, it’s really a crossing of the Rubicon,” Winograd says. 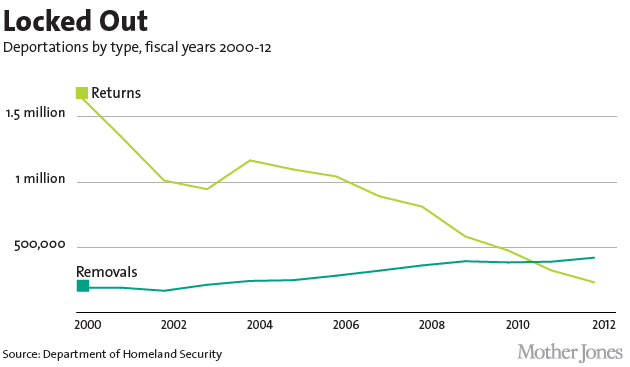 Who is being deported? In an analysis of fiscal year 2013 immigration removals, US Immigration and Customs Enforcement found that 59 percent of its removals (roughly 217,000) involved people who had previously been convicted of a crime. Most of the 152,000 deportations involving people without criminal convictions (about 84 percent) happened at the border, which technically extends 100 miles into the country’s interior. ICE officials claim the agency emphasizes deporting people who are recent illegal entrants, fugitives, or who pose risks to national security or public safety. A March 2011 ICE memo stated that the agency only had the capacity to remove 400,000 people per year, so it had to focus its efforts. Three months later, then-ICE Director John Morton called for “prosecutorial discretion” in less serious immigration cases, but researchers and immigrant rights advocates said the policy was inconsistently applied, at best.

So what are immigrants rights advocates most upset about? As immigration enforcement efforts have shifted to become more stringent over the last few years, the evolution from mostly returns to mostly removals has harsh real-world consequences. In protesting these changes, immigrant rights groups have focused on the impact they have on families.

“Any day now, this administration will reach the 2 million mark for deportations,” said Janet Murguia, the head of the National Council of La Raza, when she criticized Obama earlier this month. “It is a staggering number that far outstrips any of his predecessors and leaves behind it a wake of devastation for families across America.”

The statistics, on their own, could be misleading, and some have said advocates like Murguia are simplifying the situation. It’s important to note that many of the Obama administration’s removals happen along the 100-mile border zone, and that interior deportations have dropped significantly during Obama’s time in office. But still, the shift in policy from returns to removals carries significant legal implications for immigrants and has a major impact on people who get caught trying to reenter the country.

Many immigrants come to the United States trying to work and send money to their home countries. ICE’s top five countries of origin for removals in fiscal year 2013—Mexico, Guatemala, Honduras, El Salvador and the Dominican Republic—received a combined $36 billion in remittances in 2012, according to World Bank estimates. Along with supporting families back home, many support families and businesses here in the United States.

The emphasis on removals has created a perilous situation for undocumented workers increasingly rooted in the United States; now, they can be charged with felonies if caught illegally reentering the country after a formal order of removal. A recent Pew Research Hispanic Trends Project report notes that a growing portion of convictions in federal court are people convicted of immigration violations. In 1992, immigration offenses made up just 5 percent of federal convictions. By 2012, that number had jumped to 30 percent, most of which were convictions for illegal reentry.

“Individuals who come back after being deported, or come back after being returned, primarily they’re coming back for a reason,” says Karen Lucas, a legislative associate at the American Immigration Lawyers Association. “Our system has been broken for so long that such a large percentage of the 11 million [undocumented] really do have roots in this country.”