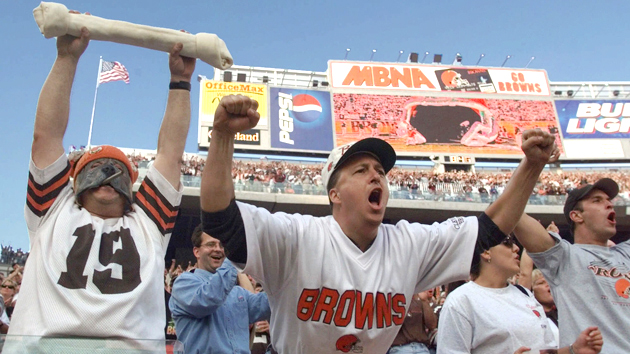 Cleveland’s professional sports teams have poured more than a million dollars into a fight they’re hoping will end in victory on Tuesday. The end goal isn’t a championship, though—it’s a municipal tax extension.

While many voters will go to the polls Tuesday to vote in congressional primaries, Cleveland residents have another decision to make: whether to extend the city’s notably regressive sin tax, which bumps up the price of cigarettes and alcoholic beverages by a few cents. If it passes, the sin tax extension will bring the amount of public money Cleveland has spent on the stadiums, which are publicly owned, up to $1.2 billion since 1990. (The city’s mayor and council president have argued that the investment pays for itself, though such claims are often exaggerated.)

The NBA’s Cavaliers and baseball’s Indians have proposed $135 million in renovations to Quicken Loans Arena and Progressive Field, respectively, including new scoreboards and concrete repairs, while the NFL’s Browns already struck a deal with the city netting $2 million a year for 15 years to pay for new scoreboards, faster escalators, and a new sound system at FirstEnergy Stadium. The three teams are fighting to ensure that sin tax money will help assuage those costs—of the $1.4 million raised by Keep Cleveland Strong, the pro-sin-tax PAC, more than $1 million has come from the Browns, Cavs, and Indians. The opposing PAC, Coalition Against the Sin Tax, has raised a mere $6,500.

The Indians even instructed ushers to wear pro-sin-tax stickers on Opening Day. While the team says the stickers were voluntary, one usher says he was fired for refusing to wear it.

Teams aren’t just tossing in cash to make sure taxpayers help foot the bill for new scoreboards. The Indians instructed ushers to wear pro-sin-tax stickers on Opening Day, according to an employee instruction sheet a former usher gave to Cleveland.com. While the Indians had told reporters that the stickers were purely voluntary, the handout reads, “An Issue 7 Keep Cleveland Strong sticker is part of your uniform. Place it chest high on your outermost layer.” The former usher, Edward Loomis, said he was fired by the team after refusing to wear the sticker. When opponents proposed adding a $3.25 ticket fee to help pay for the renovations, Keep Cleveland Strong claimed that it would punish local families and innocent sports fans.

Cleveland teams certainly aren’t the only ones asking for public money to help their facilities. The Minnesota Vikings secured hundreds of millions of dollars for their new stadium after pleading that they “only have $975 million in the budget,” while the Atlanta Braves announced a new stadium that will cost suburban Cobb County, Georgia, $300 million. The absolute nadir of public financing for stadiums came two years with the construction of Marlins Park in Miami, which will end up costing city and county taxpayers $3 billion.

The Marlins Park fiasco created such a backlash that local voters rebelled when the Miami Dolphins asked for taxpayer-funded stadium renovations, with many voting against the measure before the special election was canceled*. The strange alliance pushing for the same result in Cleveland—Ralph Nader, meet Big Tobacco!—has an uphill climb, given the funding differential and the pro-sin-tax support of so many local officials. Maybe Kevin Costner should forget about helping the Browns in this week’s draft—and instead help figure out a more efficient use of taxpayer funds.

Correction: An earlier version of this article said the Miami Dolphins stadium measure was voted down. While a majority of early voters opposed the measure, the special election was ultimately canceled before the final tally.