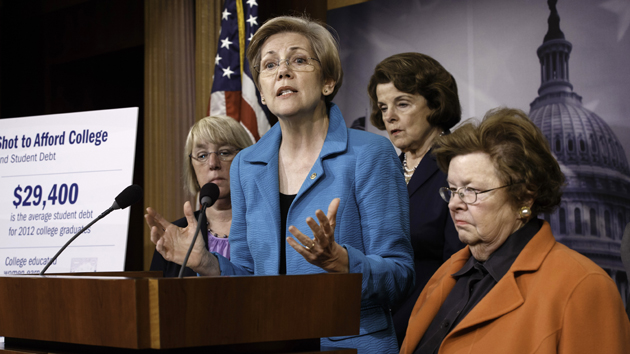 Sen. Elizabeth Warren (D-Mass.) can’t catch a break. Senate Republicans voted Wednesday morning to block her latest piece of liberal reform. The Senate voted 56-38 in favor of Warren’s bill to help ease the burden of student loan debt. Despite a majority of senators approving the measure, it failed to reach the 60 votes needed to overcome Republicans’ filibuster of the measure.

Warren’s bill is a simple concept. Current students can take out government loans at 3.86 percent interest, a cheaper rate than many of the loans held by past generations of students. The bill would also allow borrowers to refinance their current loans down to that lower rate.

Student loans have become a major drag on the economic fortunes of young Americans, hampering their ability to take risks in seeking jobs and delaying their ability to make the sort of purchases (cars, homes, etc.) that have typically defined a middle-class American life. More than 40 million people still owe money for their higher education. The total pool of loans still owed currently hovers over $1.2 trillion, more than the country’s outstanding credit card debt. About 15 percent of student loans go into default within three years.

The main reason Republicans objected to the measure has less to do with the idea of easing student loan debt, and more with the mechanism Warren used to offset the cost of refinancing those loans. It would cost the government $51 billion over the next decade to allow borrowers to refinance. But Warren’s bill would have actually reduced the deficit, bringing in $72 billion in new revenues by implementing the so-called Buffet Rule, an added surcharge tax on millionaires to ensure that they pay at least 30 percent of their income in taxes. “It’s a basic question on our values,” Warren told the Boston Globe this week. “Does this country protect millionaires’ and billionaires’ tax loopholes? Or does it try to help young people who are just starting their economic lives?”

But when even conservative fire-breathers in Republican leadership are tossed aside as RINOs, anything with the whiff of a tax increase is off the table for Republicans. Instead, it’s easier to ignore the troubles of young Americans wallowing in debt.

Senate Democrats aren’t finished pushing Warren’s bill, though. Democrats up for reelection this year have been using the bill to hammer their opponents, and the party has rolled it into their wider push for aiding women, since women are more likely to attend college but earn less for their degrees than their male peers.