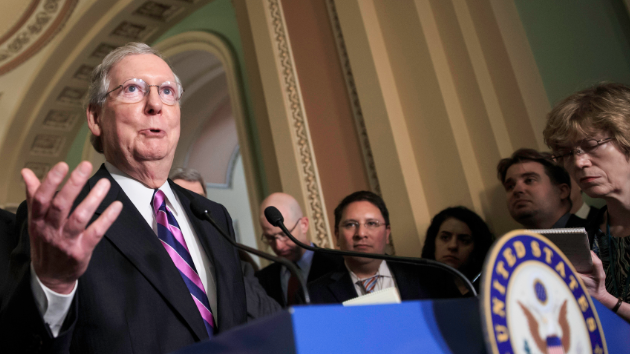 Three years ago, Senate Minority Leader Mitch McConnell (R-Ky.) was a huge cheerleader for the controversial budget plan proposed by Rep. Paul Ryan (R-Wis.) that would have partially privatized Medicare and slashed social spending programs. Now McConnell, who’s in a tough reelection fight, is backing away from his support and trying to suggest he was not an outright champion of this draconian budget measure.

In an ad released this week, McConnell’s Democratic opponent, Alison Lundergan Grimes, attacks the GOP senator for backing Ryan’s 2011 budget proposal, which would have essentially ended Medicare as a guaranteed federal program, slashed Medicaid, and repealed Obamacare. In the ad, an elderly Kentucky man named Don Disney asks why McConnell voted to raise his medical costs by thousands of dollars a year—referring to a provision in the Ryan budget that, according to the Congressional Budget Office, would hike out-of-pocket costs for Medicare beneficiaries by $6,000.

McConnell’s campaign fired back, pointing out that the senator did not vote for the proposal itself, but rather only voted in favor of bringing the measure to the Senate floor for a vote. “There is no way to speculate” what McConnell would have done regarding a final vote on the Ryan budget, his campaign insists.

But that’s cutting the legislative sausage rather thin. The vote on whether to bring the Ryan plan to the Senate floor for an up-or-down vote was the key vote—and McConnell voted in favor of the proposal. It was only because the majority Democrats blocked the bill from reaching a final vote that McConnell did not have a chance to officially vote for passage of the budget proposal. But McConnell himself bragged about having “voted” for the Ryan budget. And he repeatedly praised the Ryan plan and expressed support for the measure.

In a speech on the Senate floor in April 2011, McConnell called Ryan’s budget a “serious and detailed plan for getting our nation’s fiscal house in order.” He maintained that it would “strengthen the social safety net.”

That month, he also called Ryan’s budget “a serious, good-faith effort to do something good and necessary for the future of our nation and…for the good of the nation,” according to Congressional Quarterly.

In May 2011, McConnell, appearing on Fox News, vowed to vote for Ryan’s proposal. He said Ryan’s plan was “a very sensible way to go to try to save Medicare.”

Even though the Senate never held a final vote on the Ryan budget, McConnell’s backing for the plan—which included large tax cuts for the wealthy—was full-throated and unambiguous. “He’s probably relieved that it never came to a final vote,” says Ross Baker, a professor of political science at Rutgers University.

In responding to the Grimes ad, McConnell’s campaign also took issue with the charge that he voted to raise medical costs for Kentucky seniors by $6,000 each. The campaign claimed that this figure is out of date because Ryan’s subsequent budget plans—which also were not passed by Congress—would raise Medicare beneficiaries’ out-of-pocket costs by much less. Yet Paul Van De Water, a senior fellow at the nonprofit Center on Budget and Policy Priorities, says that the Grimes campaign “accurately” cited what the 2011 plan would have done.

Ryan’s 2011 budget would have slashed Medicare by $389 billion by raising the eligibility age and partly privatizing the program, dramatically increasing costs for new retirees. Under the same plan, funding for Medicaid would have been slashed by 35 percent over 10 years. The proposal additionally would have ended Obamacare, preventing millions from obtaining affordable health insurance. At the time, Senate majority leader Harry Reid warned the Ryan budget “would be one of the worst things that could happen in this country if it went into effect.”

As the McConnell-Grimes race—one of the most closely watched Senate contests of the year—heats up, Grimes is attempting to tar McConnell with the extreme budget plan that he once embraced. McConnell, the veteran Capitol Hill wheeler-and-dealer, is trying to wiggle out of the trap through a legislative loophole—creating a false impression and distancing himself from his party’s policymaker-in-chief.

His campaign did not respond to a request for comment.