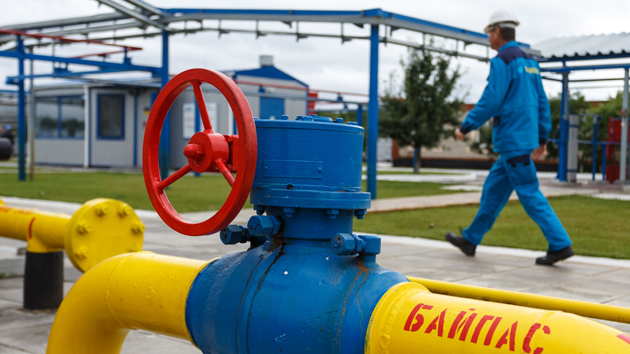 A worker passes by natural gas compressing equipment near the village of Kovalivka, Ukraine.Iren Moroz/AP

As Ukraine sinks deeper into crisis, the oil and gas industry is pressing the United States to deploy its abundant natural gas supply as a weapon against Russia—and lawmakers of both parties are lining up behind the proposal. “We have this natural-gas boom,” Rep. Pat Tiberi (R-Ohio) said last week, after the downing of a Malaysia Airlines jet, allegedly by pro-Russian rebels. “We can use this newfound energy as a diplomatic tool to give the European leaders some backbone in standing up to the Russians.”

“The ability to turn the tables and put the Russian leader in check lies right beneath our feet, in the form of vast supplies of natural energy.” —Rep. John Boehner

Their enthusiasm is understandable: Roughly half the natural gas Russia ships to Europe flows through Ukraine. During past disputes, Russia has clamped down on the nation’s gas supply, creating turmoil in European energy markets. Many US politicians fear this dynamic could dampen Europe’s response to the Ukraine crisis and have begun looking to the bounty of natural gas from the domestic fracking boom to counter Russia’s energy dominance. As House Speaker John Boehner put it in a March Wall Street Journal Op-Ed, “The ability to turn the tables and put the Russian leader in check lies right beneath our feet, in the form of vast supplies of natural energy.”

Washington has also seen a flurry of proposals to speed up natural gas exports. Last month, following a lobbying blitz by oil and gas companies, including ExxonMobil, Koch Industries, Halliburton, and Chevron, the House passed a bill requiring the Department of Energy (DOE) to rule on proposed natural gas export terminals within 90 days. The Senate has weighed similar bills and amendments. While they haven’t managed to bypass the prevailing Senate gridlock, these measures have considerable bipartisan support, and backers are determined to push them through. The fight over expediting natural gas exports helped derail the popular Shaheen-Portman energy efficiency bill and bogged down negotiations over an aid package for Ukraine. As Congress prepares to adjourn for its August recess, opponents of expanding exports are bracing for a new onslaught. “We are on the lookout, particularly for amendments being slipped into must-pass funding bills,” says one senior Senate staffer.

The Obama administration, meanwhile, is weighing plans to streamline DOE approval of liquefied natural gas export facilities (though some industry insiders doubt it will speed up the process). The issue has also played into the secret negotiations over a sweeping US-European Union trade agreement. According to an EU memo leaked to the Washington Post earlier this month, Europe is pressing the United States to lift its longstanding restrictions on fossil fuel exports and make a “legally binding commitment” to allow oil and gas to flow to EU countries.

Even if the market shifts, most European countries aren’t equipped to handle large-scale liquefied natural gas imports—and won’t be for years.

But the argument behind these measures may be a red herring. Speeding up exports would be boon to industry profits, given that natural gas costs at least three times more overseas than it does in the United States. However, according to environmentalists and industry analysts, it would do little to break Europe’s dependence on Russia. “Folks who were in favor of accelerating liquefied natural gas exports anyway have seized upon the Ukraine crisis as yet another argument for why we should be doing it,” says Edward Chow, a former Chevron executive and an expert on international energy markets. “But it won’t directly affect Europe.” Most US exports, he explains, are slated for Asia, where natural gas fetches a much higher price than it does in Europe. Even if the market shifts, most European countries aren’t equipped to handle large-scale liquefied natural gas imports—and won’t be for years.

Perhaps more importantly, according to the Energy Information Administration (EIA) and industry analysts, accelerating natural gas exports would lead to a surge in fracking, which has delivered a bounty of energy but has also been linked to earthquakes and water contamination. And it would drive up the cost of natural gas, a trend critics argue could stifle the renaissance in domestic manufacturing and impede economic growth, while making us more dependent on coal.

Back in 2012, the EIA estimated that exports of 12 billion cubic feet a day could cause natural gas prices to rise by as much as 50 percent in some scenarios. The Obama Administration has already approved more than that under the current system, which allows unlimited exports to America’s free-trade partners but requires the DOE to sign off on export facilities targeting other countries. And another 30 billion cubic feet a day in capacity are on the drawing board.

Besides the economic toll, environmentalists fear these projects could wed us to carbon-heavy energy sources. “Putin is going to be dead and gone by the time that infrastructure is built,” says Bill Warren, a senior trade analyst at Friends of the Earth. “And once it’s in place, it will ensure continuing supply of these dangerous fossil fuels for decades to come. That’s exactly the wrong way to go.”