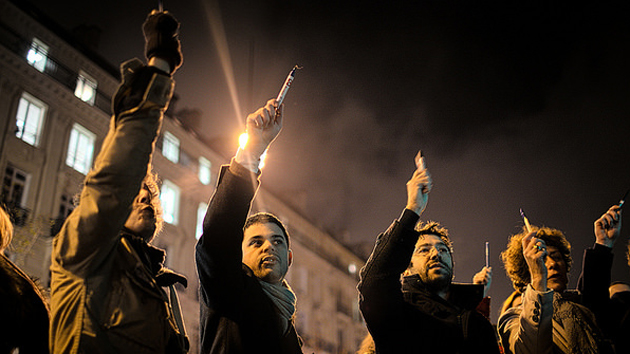 The available evidence suggests the attackers who killed 12 people and wounded 4 more at the French weekly Charlie Hebdo on Wednesday targeted the magazine because of its history of publishing cartoons about Islam and Muslims. But which radical group, if any, the killers might belong to is unclear: Some reports claim the gunmen shouted their allegiance to “Al Qaeda in Yemen” during the attack; others claim that a Charlie Hebdo tweet mocking ISIS’s leader, Abu Bakr al-Baghdadi, suggests that the Islamic State must have been involved.

Unsatisfied by these explanations, some people are digging deeper, asking who really was to blame for the bloodshed. Here’s a rundown of some of the strangest theories:

Israel
The likelihood that an Islamic terror group is responsible hasn’t stopped some people from suggesting that Israel is somehow responsible. The International Business Times India published this piece blaming the Israeli spy agency Mossad:

Although there is no way to verify the claims that Mossad was involved, the backdrop in which the attack took place seems to indicate that they might be involved, many conspiracy theorists have noted. Mossad is responsible for intelligence collection and has undertaken many covert operations for Israel in Europe that aim to further their Jewish cause.

The site has since taken the article down, saying it “should never have been published.” Meanwhile, even less-reputable voices, like that of Kevin Barrett (“the world’s leading Muslim 9/11 truth activist”), alleges the attack was an Israeli “false flag.”

President Barack Obama
As if on cue, American conservatives began figuring out ways to somehow blame President Obama for the attacks. Rush Limbaugh claimed that Obama’s proclamation in his 2012 United Nations speech following the Benghazi attacks—”the future must not belong to those who slander the prophet of Islam”—emboldened the Paris attackers. “You have the president of the United States rationalizing barbaric behavior,” Limbaugh said. “These actions have consequences.”

US Intelligence
Russian website Lifenews.ru ran an interview with a political analyst named Alexei Martynov, who suggested the militants were “the US intelligence services.” Claiming the notion that the Muhammad cartoons motivated the attack “looks funny,” Martynov said, “I am sure that American ‘curators’ are behind the events in Paris, behind those Islamists, in one way or another. The US is conveniently wreaking havoc in Europe with the goal of muzzling the common sense voices that are calling to restore cooperation with Russia.”

France
Some people are even blaming France itself—mainly for allowing Muslim immigration. In America, Laura Ingraham warned that “the principle of multiculturalism and open borders…is pure insanity, a suicide pact,” and Fox’s Eric Bolling said France’s immigration policy “breeds this type of extremism.”