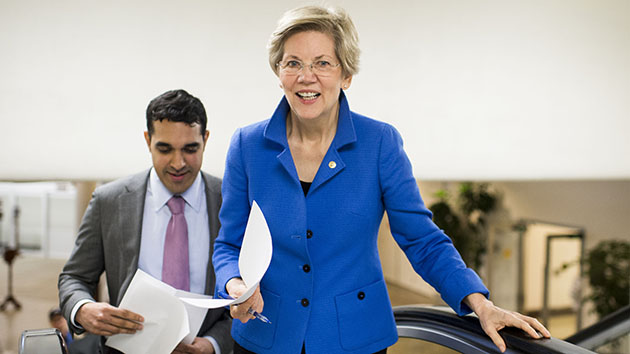 Sen. Elizabeth Warren is worried about more than big banks. She’s got Big Pharma in her sights too.

On Thursday, the Massachusetts Democrat announced a new bill, the Medical Innovation Act, which she says would address two major problems: dwindling government investment in medical research and illegal practices by major pharmaceutical companies. The bill, which she intends to introduce in the Senate next week, would take money from fines levied against major pharmaceutical companies that engaged in illegal practices and use it to fund drug research at the National Institutes of Health (NIH) and the Food and Drug Administration (FDA).

“It’s like a swear jar,” Warren told the crowd at the Families USA Health Action Conference in Washington, according to her prepared remarks. “Whenever a huge drug company that is generating enormous profits as a result of federal research investments gets caught breaking the law—and wants off the hook—it has to put some money in the jar to help fund the next generation of medical research.”

“The National Institutes of Health plays a vital role in basic research and early discovery, and we support sufficient federal funding for their work,” PhRMA senior vice president Robert Zirkelbach said in a statement on Warren’s bill Thursday. “But pursuing misguided policies that siphon funding from the groundbreaking medical research happening in the biopharmaceutical industry will have devastating consequences for patients and society. The proposed legislation would result in fewer medicines for patients and lost jobs at a time when our economy can least afford it.”

A Democratic staffer familiar with the legislation said the bill was unlikely to have this effect because the penalty is a percentage of the companies’ profits after any research and development spending, meaning the more they spend on R&D, the less they’d pay in fines.

Not everyone thinks that Big Pharma would lose out under Warren’s proposal. According to Dean Baker, an left-leaning economist at the Center for Economic and Policy Research, Warren’s bill could ultimately represent a big giveaway to the pharmaceutical industry. He points out that money used to fund NIH research often leads to contracts with biomedical and pharmaceutical companies that ultimately end up with patents for whatever new drugs have been created. Those patents, of course, allow the drug companies to drive up prices and are hugely profitable. Baker wishes that Warren’s bill also stipulated that patents for discoveries made with the new funding remain in the public domain.

“I really wish she would tackle that,” Baker said of the patent issue. “That could just end up being another handout to the industry.”

Warren’s inspiration for her proposal sounds a lot like her populist rhetoric on the campaign trail in 2012. Although pharmaceutical companies deserve some of the credit for life-saving drugs, she argued Thursday, government deserves some too. “Blockbuster drugs that generate billion-dollar profits and are used by millions of consumers don’t just appear overnight as if by magic. Rarely do they appear as the result of a single, giant company’s individual genius,” Warren said, according to the prepared remarks. “Drug companies make great contributions, but so do taxpayers. In other words, we built those medical innovations together.”

This familiar refrain is part of the theme that turned Warren into a progressive star in 2012. Remember the “You built that with help” speech?

Biomedical research funding is particularly critical to Massachusetts, where scientific and biomedical research are vital to the state economy, so it’s no surprise that Warren has been talking about for a while. In 2013, Warren called for doubling NIH’s budget. Last fall, she worked on a bipartisan bill with Republican Sen. Orrin Hatch of Utah to create a $10 billion fund for biomedical research. But unlike Warren’s new proposal—which asks pharmaceutical companies to pay back into the system—the Warren-Hatch Invest for a Healthy Future Act would have simply taken the money from other parts of the budget. In an era of tight budgets, it’s not easy for Washington to agree on where to find $10 billion in cuts. That bill was never formally introduced.

Warren’s new bill adapts to the reality that it’s hard to find funding within the already austere budget, and even harder to raises taxes to add to the budget. Under the plan put forward Thursday, only large drug companies—not small or midsize ones—that reach settlements with the government for illegal behavior would have to pay.

With members of Congress on both sides of the aisle dependent on the pharmaceutical industry for campaign donations, it’s not clear that Warren’s bill would pass either house, much less make it to the president’s desk. “I don’t kid myself. I know how difficult it is to get things done in Washington,” Warren admitted Thursday, before calling on people to help her fight for this proposal.

That probably won’t convince her colleagues to pass her bill. But it’s the same sort of populist rhetoric that made her a lefty favorite in the first place—and has her fans urging her to run for president.