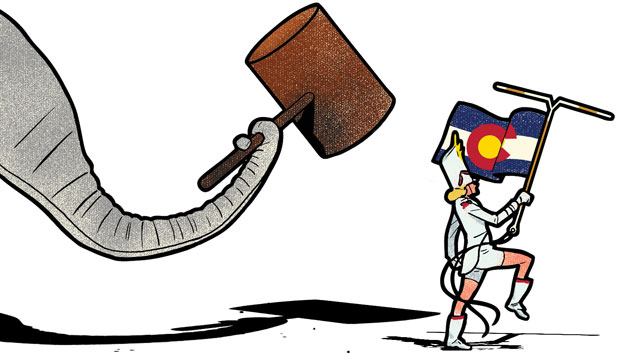 Late in 2007, an employee at the Colorado health department received an unusual request. A private foundation wanted the state to provide long-acting, reversible birth control—intrauterine devices and hormonal implants—to low- and moderate-income women at little or no cost. The foundation was willing to foot the bill—which ended up being $27.4 million—so long as it was allowed to remain anonymous.

Seven years later, the program has been, by most measures, a huge success. Teen birthrates are dropping across the country, but Colorado’s has fallen faster than the nationwide average, allowing it to leapfrog 11 spots in the national rankings. Between 2010 and 2012, the state estimates, 4,300 to 9,700 births to women on the state’s Medicaid program that would have otherwise occurred did not—saving Medicaid between $49 million and $111 million. The state’s abortion rate has also cratered, falling 42 percent among women ages 15 to 19 and 18 percent among women ages 20 to 24 between 2009 and 2012.

Now the private donor—whose identity remains secret—is ending the grant. A bipartisan pair of legislators in the Democrat-controlled state House have introduced a bill to use state money to continue the program. But in the state Senate, where the GOP holds a one-vote majority, abortion politics—and the Supreme Court’s Hobby Lobby decision—may scuttle the plan.

At issue are some abortion foes’ beliefs that IUDs can cause abortions—the same belief that led to the Oklahoma-based hobby chain’s lawsuit against the Obama administration’s requirement that employers provide insurance that covers contraception or pay a fine. Most scientists say IUDs primarily work by preventing fertilization. But some IUDs can occasionally prevent a fertilized egg from implanting in a woman’s uterus. Fertilized eggs often fail to implant, even without birth control, so most doctors define abortion as the termination of an already implanted pregnancy.

But many conservatives who believe human life begins at conception consider preventing implantation akin to abortion.

“I’ve looked into this pretty thoroughly. An IUD has both contraceptive and abortifacient characteristics. It jeopardizes a child that may have been formed through fertilization—jeopardizes means kills.”

“By the time you get to that implantation point, we are not talking about a fertilized egg, we’re talking about a new individual that’s growing,” says state Sen. Kevin Lundberg, who serves as the Republican assistant majority leader and chairs the Senate’s health and science committee. He has vowed to fight the measure. “In Hobby Lobby, this was really the point there. They had no objection to contraceptive materials being funded through their insurance. But they had significant objections when it was an abortifacient.”

Democratic Rep. K.C. Becker, who introduced the bill to continue the program in the House, is aiming for broad bipartisan support. “Without this funding the program will not continue,” she says. “To me, when you find the best method to achieve a statewide goal of reducing unintended pregnancies, reducing abortion, reducing Medicaid costs…reducing costs for other state and federal programs—we absolutely should continue the program. The return on investment and the benefit to women, to families and to the state are very clear.”

Lundberg disagrees. “I’ve looked into this pretty thoroughly,” he says. “An IUD has both contraceptive and abortifacient characteristics. It’s clear to many professionals that it jeopardizes a child that may have been formed through fertilization—jeopardizes means kills.”

Morgan Carroll, the Democrats’ leader in the state Senate, says she thinks her party will be united in favor of Becker’s bill, and may be able to peel off a few Republican votes to push the funding through—so long as GOP leaders don’t bring down “too hard of a hammer” on their caucus. “Contraception used to be an area of common ground,” she says. “I can recall days when we were all fighting together to reduce teen pregnancy, to reduce abortions.”

It would be a shame if politics killed off the program, says Payton Hoops, an 18-year-old Colorado College freshman who obtained an IUD through the program when she was a senior in high school. “It would be a great use of money coming from the state to fund programs like this, especially for someone like me who really believes that contraceptives should be accessible and affordable to everyone,” she says. “It’d be really nice to see the state prioritize that in terms of women’s reproductive health, and it would be a really great use of the money.”

“We so often have this position of Republican men mansplaining our lady parts and how they work like we’re too dumb to understand science and make our own decisions.”

Lundberg says he has no moral objections to hormonal implants, which he understands to act only by preventing ovulation. But “there is a question of should we be providing long-term contraceptives to young unmarried girls. Are we saying, ‘Go ahead and have sex—just don’t get pregnant’?” He says the debate presents an opportunity to educate Coloradans, “because there is so much misunderstanding of what an IUD is”—and warned that “far too often young women die from the pill” too. (Hormonal birth control can cause fatal blood clots, but such side effects are incredibly rare.)

Carroll says she’s mystified as to why Republicans would want to pick a political fight over such a successful program. “I am entirely convinced that they are on a terribly losing side of this issue,” she notes. “We so often have this position of Republican men mansplaining our lady parts and how they work like we’re too dumb to understand science and make our own decisions…To oppose this is a very serious political mistake.”