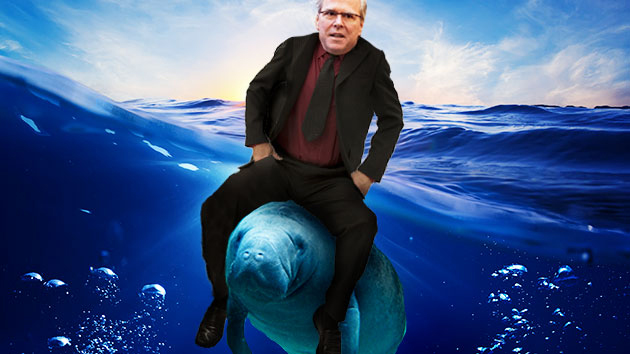 It was the kind of feel-good photo op that campaigns love: A manatee nursed back to health from the brink of death and now set to be released back into the wild. And a GOP gubernatorial candidate seeking to show voters his softer side. As if in some made-for-TV movie, the manatee and the politician even shared the same name: Jeb.

Jeb the manatee was rescued on March 23, 1998, having ventured too far north from the temperate waters of South Florida where these mammals thrive. The nine-foot-long, half-ton manatee was scarred with lesions comparable to severe frostbite injuries in humans, and he appeared to have sustained injuries from watercraft. He was quickly transported to SeaWorld Orlando to recover.

Months later, after the manatee had recuperated, Jeb Bush, then making his second bid for Florida governor, assisted in releasing Jeb the manatee back into his natural habitat. Bush had a commanding lead in the polls, thanks to the “kinder, gentler” image he was trying to cultivate. (The manatee was named after a relative of one of the researchers who discovered him.)

An August 1998 Orlando Sentinel article, titled “Manatees Get a Second Chance at Life,” describes the meeting of the Jebs. Bush accompanied a SeaWorld caravan transporting Jeb and another rehabilitated manatee to the warm waters of Blue Spring State Park near Orlando:

On Wednesday, a caravan of trucks and cars arrived at the state park with the manatees carefully wrapped in soaked foam to keep their skin wet. Gubernatorial hopeful Jeb Bush rode along with the other Jeb and helped water his back.

Lying on the riverbank on Wednesday, the manatee was refitted with the satellite tag. After scientists made a last check of his blubber content, a dozen people, in synchronized steps, hoisted the manatee into the water.

Though finally free, Jeb chose to remain by the shoreline, his satellite tracker floating close to the crowd.

Bush, who would later call the manatee his “favorite mammal,” told the Sentinel that “the experience helped teach him about endangered species and government’s role in protecting them.”

After Bush won the race, the issue of manatee conservation would figure prominently in his administration. He attempted to bolster his reputation as a committed defender of the endangered species, though some environmentalists criticized his record. In 2001, Bush appeared in a documentary about Florida manatees for the Outdoor Life Network (now NBC Sports Network), titled Manatees: Carnage on the Coast.

In the film, which touched on Bush’s manatee-protection efforts, the narrator says Bush was “turning up the heat” on the manatee issue by forcing Florida counties to develop manatee protection plans. “There’s a lot of support for what we’re doing,” Bush said in the documentary, but added that the messages he received from constituents—which tended to accuse him of doing too much or not enough to help—were the “nastiest emails I’ve probably gotten on any subject.”

As Bush’s manatee agenda got moving, so did Jeb the manatee. Dr. Bob Bondey, a research biologist and manatee specialist at the US Geological Service, says that soon after his release, Jeb migrated back up to colder waters of the St. Mary’s River area in Georgia, where he’d been rescued. He lost his radio tracker in May 1999, and the next time researchers made contact with Jeb was in January 2001, when they found his carcass on a beach near Vero Beach, Florida. His fatal flaw: He kept swimming too far north, and when cold weather hit, he couldn’t get to warm water fast enough.

Emails Bush recently made public reveal a discussion between the governor and his team regarding the Outdoor Life Network documentary, and whether Jeb the Manatee’s tragic tale should be part of it. Kathleen Shanahan, then Bush’s chief of staff, advised the governor that the documentary was “a perfect opportunity to pay tribute to Jeb the manatee…his symbolic death in youth… Sounds like a good opportunity to speak to your environmentally balanced leadership.” Bush jokingly replied, “[M]aybe we can write a screenplay and sell it to Hollywood.”

In the end, Jeb the manatee was not mentioned in the film. Colleen Castille, a member of Bush’s cabinet, surely thought this was best. In the email chain about the documentary, she expressed her reservations about highlighting the manatee’s story:

regarding this dead manatee everyone seems to be bringing up. Please remember Darwin’s principal of natural selection.  Weak and not very bright animals/mammals tend to fail in the wild. This manatee had one instinctual drive that put him in danger every year.  He kept going back to cold water during a cold front. Man/Seaworld intervened the first time his little flipper froze. He was healed and sent out into the wild again. A couple of years later he was found dead in cold water right after a cold front.  He was on his way up to north Georgia (colder water) to a warm water industrial plant discharge. It didn’t make (people) sense because there were warm water discharges near his summer/fall seasonal hangout. But instinctually he headed to the one warm water refuge that he had known in Georgia. This was not wise and nature doesn’t accommodate animals/mammals that make unwise choices.  While this would make for a great sappy film, or a documentary on natural selection, it is not the point that we should be focusing on.

Bush did not respond to several requests for comment.

Update: After this story was published, Bush’s office emailed the following statement:

While sadly Big Jeb has passed on, Governor Bush is very pleased that manatees continue to thrive in record numbers in Florida — more than 6000 this year, up from 1600 in 2000.  Governor Bush is proud of his record of protection for his favorite mammal.