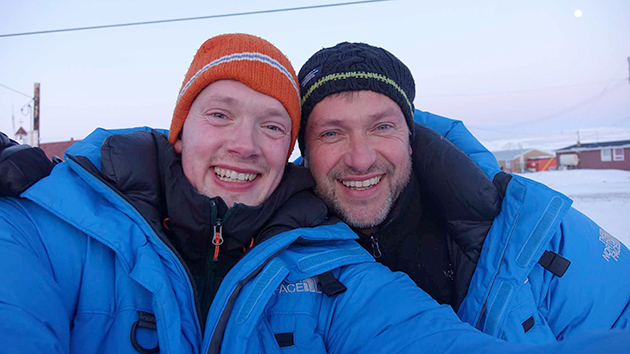 Early last month, veteran polar explorers and scientists Marc Cornelissen and Philip de Roo set out on skis from Resolute Bay, a remote outpost in the patchwork of islands between Canada and Greenland. Their destination was Bathurst Island, a treacherous 70-mile trek to the northwest across the frozen sea, where they planned to document thinning Arctic sea ice just a few months after NASA reported that the winter ice cover was the lowest on record.

It wasn’t hard to find what they were looking for, according to a dispatch Cornelissen uploaded to Soundcloud on April 28.

“We’re nearing into the coast of Bathurst,” he said. “We think we see thin ice in front of us…Within 15 minutes of skiing it became really warm. In the end it was me skiing in my underwear…I don’t think it looked very nice, and it didn’t feel sexy either, but it was the only way to deal with the heat.”

His next message, a day later, was an emergency distress signal picked up by the Royal Canadian Mounted Police. According to the Guardian, a pilot flying over the spot reported seeing open water, scattered equipment, and a lone sled dog sitting on the broken ice. By last Friday, rescuers had called off the search. The pair are presumed to have drowned, victims of the same thin ice they had come to study. Cornelissen was 46; de Roo had just turned 30.

Yesterday, Cold Facts, the nonprofit with whom the pair was working at the time, dispatched a snowmobile expedition to attempt to recover their belongings. You can follow their progress on Twitter here. The dog, Kimnik, was found a few days ago and is doing fine, the group said.

In a blog post on the website of the European Space Agency, Cornelissen was remembered by former colleagues as “an inspirational character, an explorer and a romantic. He had fallen in love with the spellbinding beauty of the poles and had made it a personal mission to highlight the magnitude of the human fingerprint on this last wilderness.”

It’s not clear whether the ice conditions the pair encountered were directly attributable to climate change, according to E&E News:

That the region had thin ice is evident. Perhaps the ice had been thinned by ocean currents that deliver warm water from below, or by the wind, which could generate open water areas. It is difficult to know. Climate change may have played a role, or it may not have…the impacts of the warming on ice thickness regionally can be unpredictable, [ESA scientist Mark] Drinkwater said.

Still, the Arctic is warming twice as fast as anywhere else on Earth. We rely on the work of scientists like these to know exactly what is happening there and how it will affect those of us who choose to stay safe in warmer, drier places. Their deaths are a testament to the dedication and fearlessness required to stand on the front lines of climate change.