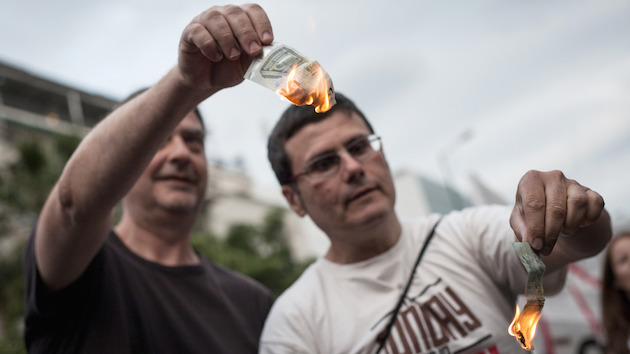 Update (6/29/2015): The Wall Street Journal reports that Greece will not in fact make its loan payment tomorrow, which the International Monetary Fund says will automatically mean it has defaulted on its debt. Read on to see what effects the default may have.

After months of failed negotiations with its creditors, the government of Greece now has 24 hours to pony up a $1.8 billion loan payment to the International Monetary Fund. With the country out of money and the European Union unwilling to soften its stance on Greek debt, finding that much cash is about as likely as it sounds.

If Greece does default on its loans, there are plenty of terrible consequences potentially in store for the country: It could be forced to leave the euro, get cut off from international capital markets, and see its already-hurting economy—about a quarter of Greeks are unemployed—shrink even further. But the United States might also suffer.

At the most basic level, the turmoil is already hurting financial markets around the world, which means bad news for the investments and 401(k)s of American workers. And as global investors look for safe places to put their money, the dollar is moving back up against the euro, which is bad news for American exports. “Combined with soaring interest rates in Europe, [a strengthening dollar] could make U.S. exports more expensive and unattainable to EU member states,” argued Investopedia’s Trevir Nath in April.

The larger danger is that if Greece becomes the first country to abandon the euro, it won’t be the last. “The euro no longer seen as irreversible could be quite damaging,” Gabriel Sterne, the head of global macro research at Oxford Economics in London, told the International Business Times. That’s a big potential risk to the European Union, which is America’s biggest trading partner.

Experts do point out that the global economy is doing better than it was in 2010, the last time Greece faced a potential default, and the rest of Europe has since taken steps to insulate itself from trouble in the continent’s poorer countries. But default still threatens to slow down the European and global economy, reduce demand for American products, and derail US economic growth.

Greece isn’t even the only place that’s experiencing a serious debt crisis: Puerto Rico’s governor, Alejandro García Padilla, said on Sunday that the US territory can’t afford to pay its own $72 billion debt. Much of that debt is owned by American hedge funds that invested in the island’s tax-free bonds, and a Puerto Rican default could deal a huge blow to the US municipal bond market. “There is no U.S. precedent for anything of this scale or scope,” said an economic report commissioned by Padilla that was obtained by the New York Times on Sunday.

Padilla says he’ll try to renegotiate Puerto Rico’s debt on terms more favorable to the island. As opposed to its European counterparts, which have drawn a line in the sand with Greece, the United States seems far more likely to assist Puerto Rico. But the territory’s financial crisis is another potential economic threat that Americans can’t ignore.