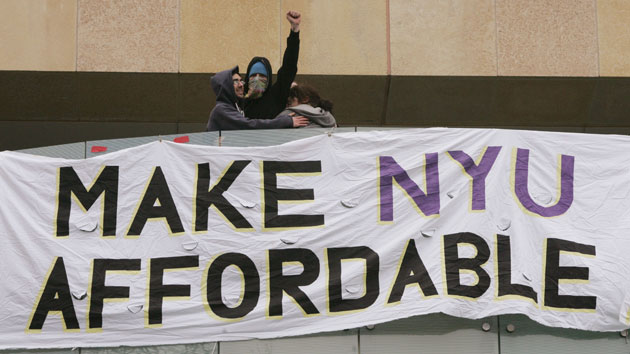 This story originally appeared on the website of ProPublica.

New York University is among the country’s wealthiest schools. Backed by its $3.5 billion endowment as well as its considerable fundraising prowess, the school has built campuses in Abu Dhabi and Shanghai financed by foreign governments, is investing billions in SoHo real estate, and given its star faculty loans to buy summer homes.

But the university does less than many other schools when it comes to one thing: helping its poor students.

A ProPublica analysis based on new data from the US Department of Education shows that students from low-income families graduate from NYU saddled with huge federal loans. The school’s Pell Grant recipients—students from families that make less than $30,000 a year—owe an average of $23,250 in federal loans after graduation.

That’s more federal loan debt than low-income students take on at for-profit giant University of Phoenix, though NYU graduates have higher earnings and default less on their debt.

NYU is not the only university with a billion-dollar endowment to leave its poorest students with heavy debt loads. More than a quarter of the nation’s 60 wealthiest universities leave their low-income students owing an average of more than $20,000 in federal loans.

This new data on student debt is drawn from numbers that the Obama administration assembled as part of a planned effort to create grades for every college. In the face of fierce lobbying from universities, the administration backed away, but has made much of the data public on a new website called College Scorecard. ProPublica has used that material to create Debt By Degrees, an interactive database that allows you to search information for almost 7,000 schools. The data provides an unprecedented level of detail on the financial burden that the poorest college students face, showing for the first time how much federal debt poor students take on compared to their wealthier peers, and how well these students are able to repay their loans. The database also shows how much graduates earn on average after leaving school.

The implications of these numbers can be far-reaching. Studies have shown that even small debts can increase a student’s chances of dropping out, particularly for minorities and low-income students. Also, federal loans, which are typically capped at $27,000 over four years, often don’t cover the full expense of college. Many students also take on private bank loans or work jobs outside school.

“Student debt is not the same to every borrower,” said Mark Huelsman, a senior analyst at Demos, a public policy nonprofit. “It can look a lot different to a first generation student from a very modest economic background than to someone going to graduate school getting a law degree.”

Indeed, undergraduates take a fraction of the loans of graduate students but default at much higher rates. Debt can put low-income young adults at a disadvantage for years to come, limiting a graduate’s ability to save, get a mortgage, or get the job they aspire to.

“At the end of the day, you’re talking about households that don’t have nearly as much wealth to fall back on,” said Huelsman.

Rebecca Arthur wanted nothing more than to study photography at Tisch, NYU’s arts school. Her mother, however, made less than $25,000 a year working at a nursing home, so Arthur knew the school’s four-year price tag of over $250,000 would be a stretch. When Arthur was accepted, she was shocked – not only because she had gotten into her dream school, but also because the school only offered modest financial aid.

Arthur tried to crowdfund the remaining amount of her tuition, but it was only when her mother died a month before school started that NYU agreed to take a second look at her financial aid package. Although they increased her aid, she works four jobs and expects to graduate with over $24,000 in loans.

“The one downside to NYU is that money is always a big problem,” said Arthur, who is now a sophomore at the university. “People that really want [to go to NYU] and deserve it shouldn’t have to fight for it.” 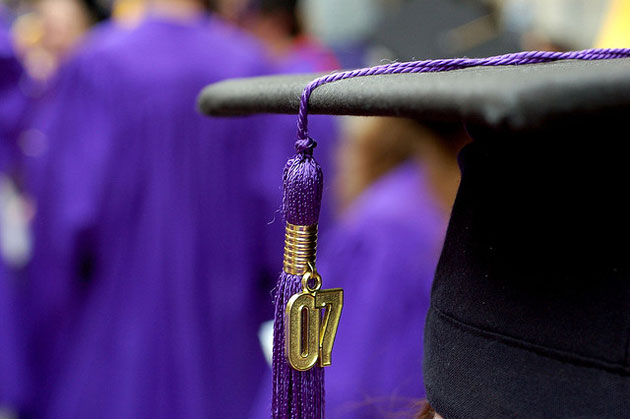 In response to recent criticism of its financial priorities, NYU says it has more than doubled financial aid from 2002-2012 and that average student debt has decreased significantly in the past five years. The school also enrolls a greater percentage of Pell Grant recipients than other elite schools. Finally, NYU points out that its endowment is actually quite modest on a per-student basis, since NYU has far more students than many other elite universities.

While NYU students average debt from both federal and private loans has gone down in the past five years, it’s about the same as a decade ago. And though NYU’s financial aid increased 138 percent from 2002-2012, its revenue from tuition and fees has increased 91 percent. Faculty and students have protested NYU’s $6 billion expansion plan, saying more should be spent on financial aid.

A government report released along with the data noted just how wide a disparity there can be in the prices poor students pay at competitor schools: Poor students pay an average of $8,086 per year at Columbia University ($8.2 billion endowment) versus $25,441 at NYU.

“Schools talk so much about how they’re about helping low-income students,” said Stephen Burd, a senior policy analyst at New America Foundation. “But their words and actions are so different.”

Out of the nearly 2,000 nonprofit colleges that ProPublica analyzed, a handful of wealthy schools do particularly well in serving the needs of low-income students.

Vassar College, with an endowment of close to $1 billion, charges its poorest students a quarter of what NYU does, and they graduate with less than half the debt.

“Schools talk so much about how they’re helping low-income students. But their words and actions are so different.”

Only a decade ago, Vassar looked little different than NYU. However, in 2006, the school hired a new president, Catharine Bond Hill, an academic who specializes in college access and affordability. During her first few years, Hill instituted need-blind admissions, accepting students regardless of their financial background. She also created a policy of replacing loans with grants to poorer students. And to bolster low-income applicants to the school, she initiated an aggressive recruiting campaign in poorer neighborhoods, partnering with pre-existing college prep programs.

After 10 years, these changes have made Vassar one of the most affordable colleges in the country for low-income students. Today, over 20 percent of Vassar students receive Pell Grants. Thats double the percentage of low-income students of a decade ago.

“Schools that have the resources should be giving out more in need-based grant aid,” Hill told ProPublica.

Other schools that have helped level the playing field for low-income students include Amherst College and Williams College, both in Western Massachusetts. Nearly 20 percent of students at these schools receive Pell Grants and they graduate with less than $10,000 of federal loans. Berea College in Kentucky charges no tuition and only accepts low-income students.

Vassar’s Hill told ProPublica that other wealthy schools need to do more to recruit low-income students and to make college affordable for them. A White House report that accompanied the data release notes that poor kids are often discouraged by schools’ sticker prices, and do not know that they might qualify for financial aid.

“We know there are talented students out there and recent work has shown there are ways to get them into our pools,” Hill said.

Asked about their modest number of low-income students, a Harvard official said that school is committed to enrolling the best students, regardless of their financial circumstances.

Co-author Sisi Wei was a paid adjunct professor at NYU in spring 2015.

Clarifications have been made since the original story appeared on ProPublica:

Sept. 14, 2015: We clarified two parts of this story: One to remove the implication that NYU’s endowment paid for the Abu Dhabi and Shanghai campuses, the other to be more specific about the time period we used in calculating the growth in NYU’s financial aid.

September 15, 2015: We have further clarified that NYU’s Abu Dhabi and Shanghai campuses are financed by foreign governments. We have also detailed the difference between the growth in NYU’s aid and its revenue from tuition.