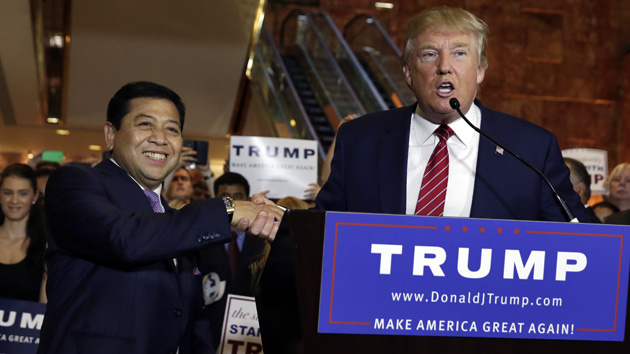 NFL quarterback Tom Brady isn’t the only person in the hot seat for owning a Donald Trump hat. The GOP front-runner’s signature cap has made it all the way to Southeast Asia, where it’s causing trouble for two of Indonesia’s top lawmakers.

On Friday, the Indonesian government’s anti-graft body, known as the Corruption Eradication Commission, confiscated a Trump hat and ties from Fadli Zon, deputy speaker of the country’s House of Representatives. Fadli had received the hat as a gift from Trump during a visit earlier this month to the United States with Setya Novanto, the speaker of Indonesia’s legislature, and both officials are now under investigation for a possible ethics violation.

The controversy, dubbed “the Trump fiasco” by Indonesian media, began after Setya and Fadli made an unexpected appearance at a campaign event for the American real estate mogul in New York on September 3. Trump, who has significant business investments in Indonesia, invited Setya up to the microphone and introduced him as “one of the most powerful men, and a great man,” before asking, “Do they like me in Indonesia?” With a smile, Setya responded, “Yes, highly”—prompting applause from the audience at the Trump Tower.

But in Indonesia, the exchange did not go over quite so well. As one Jakarta-based news site explained, Setya’s statement “could have been construed as Indonesia’s political establishment endorsing the puffy-haired business mogul’s bid for the Republican nomination.” The Indonesian legislature’s ethics committee is now investigating Setya and his deputy for possible violations during their trip to the United States, which was funded with more than Rp 4.6 billion ($325,000) from Indonesian taxpayers. On Tuesday, the ethics committee threatened to have the police forcibly bring in Setya to explain his appearance at the campaign event, after the Indonesian speaker failed to respond to a summons from the committee.

Concerned Indonesian citizens have even launched a petition on Change.org, calling for the resignation of the two lawmakers. “They both had embarrassed the nation of Indonesia on behalf of the people of Indonesia to support Donald Trump,” the petition’s organizer wrote, according to one translation on an Islam news site. (Indonesia has the world’s largest Muslim population, and Trump has faced criticism recently for failing to object when a political supporter said Muslims were a problem in America and asked, “When can we get rid of them?”)

The Indonesian lawmakers were officially visiting New York to attend the 4th World Conference of Speakers of Parliament at UN headquarters. Before heading to Trump’s campaign event, they reportedly met more privately with the GOP presidential hopeful to discuss investments in Indonesia. The meeting was arranged by an Indonesian media tycoon who is partnering with Trump to build resorts on the Indonesian island of Bali, a popular tourist destination, and on Java near the capital, Jakarta. The latter resort is expected to include a theme park “like Disneyland in Orlando.”

A member of the Indonesian legislature’s ethics council has said the speaker and his deputy could be stripped of their leadership positions in the legislature if they are found to have committed a moderate violation, and they could be suspended or permanently dismissed from the legislature in the case of a serious violation. Setya, meanwhile, has defended his interactions with Trump, saying, “The meeting was spontaneous between friends. It so happened that [Trump] is a businessman who has many investment activities in Indonesia.” In a statement, a spokeswoman from the Indonesian delegation to the United States said the Indonesian lawmakers did not intend to offer any political support to Trump, but that “as polite easterners” they could not turn down the GOP front-runner’s invitation to the New York campaign event.

Others were not convinced. “[Setya and Fadli] came as the House speaker and met Donald Trump wearing the House pin,” Charles Honoris, another Indonesian legislator, told local media, calling for sanctions against the two officials. “It means they answered Trump’s question as House speakers.” It seems the Indonesian House speaker and his deputy made a number of wardrobe-related mistakes during their visit with Trump. In addition to wearing the official legislative pin, Setya is under fire for showing up at the campaign event with a Swiss-made Richard Mille watch—believed to cost about $140,000—on his wrist, even though Indonesian lawmakers earn about $55,000 annually.