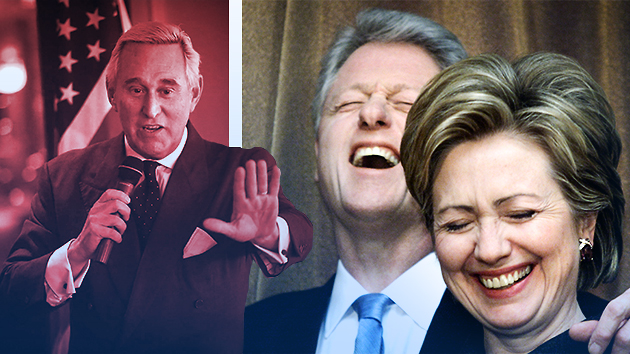 Roger Stone, the onetime Nixon aide and self-professed dirty trickster, reemerged this past year as a prominent political player, first as an adviser to Donald Trump’s presidential campaign and then, after departing Team Trump, as the billionaire’s most passionate advocate in the media. (After the second GOP debate, Stone proclaimed that Trump had a “shining moment” in that 11-person face-off when he slammed the Iraq War, and he dismissed Trump antagonist Carly Fiorina as “strident.”) Now Stone is getting deep into the muck with the release of a book apparently designed to smear the Clintons—by depicting Bill as a serial rapist, Hillary as an enabler, and both members of the power couple as a diabolical duo bent on destroying anyone who stands in their way. The book, The Clintons’ War on Women, will be released in mid-October. Promotional material for it claims, that “this stunning exposé reveals for the first time how Bill and Hillary Clinton systematically abused women and others—sexually, physically, and psychologically—in their scramble for power and wealth.” Moreover, Stone tells me that this personal destruction campaign will extend beyond the book: He has taped interviews of the supposed victims of the Clintons and will release a video sometime before the 2016 primaries begin.

In a July column, Stone provided a preview of the book, claiming, “The Clintons’ activities have included Bill’s physical rape and sexual assaults on women and Hillary’s degradation and psychological rape of women that Bill has assaulted. ‘Sluts,’ ‘whores,’ ‘bitches,’ Hillary has called them, blaming and shaming them for the unwanted physical attentions and violence of her husband.”

The book is being put out by Skyhorse Publishing, which has issued scores of books written by John Kennedy assassination conspiracy theorists, including Stone’s own tome on the subject, The Man Who Killed Kennedy: The Case Against LBJ. (Stone contends that Lyndon Johnson was the driving force behind a conspiracy by the CIA, the mafia, and Big Oil in Texas to murder Kennedy.) Skyhorse is touting the anti-Clinton book, which Stone cowrote with a researcher named Robert Morrow*, in terms that will hearten conservatives who have despised the Clintons for decades and readily embraced the most scurrilous material on the couple:

This is the first book to shed light on the couple’s deeply personal violations of the people they crushed in their obsessive quest for power. Along the way, Stone and Morrow reveal the family’s darkest secrets, including a Clinton family member’s drug rehab treatment that was never reported by the press, Hillary Clinton’s unusually close relationship with a top female aide, and a stunning revelation of such impact that it could strip Bill Clinton of his current popularity and derail Hillary’s push to be the second Clinton in the White House.

In an interview earlier this month with Breitbart, Stone claimed the book chronicles 14 times that Hillary Clinton hired private detectives to threaten and silence her husband’s victims. A press release claims the book details dozens of instances when Bill Clinton committed sexual assault and shows that he is not Chelsea Clinton’s father. It breathlessly notes, “Even more dark family secrets are divulged, such as Bill Clinton’s ties to murder, his time in drug rehab, and his illegitimate African American son whom he refuses to acknowledge, support, or nurture.”

That’s a lot of darkness.

The book is something of a throwback to the 1990s’ “vast right-wing conspiracy”—a term Hillary Clinton used during the Clinton impeachment scandal to dismiss her husband’s foes and the assorted allegations hurled at the couple. Its cover features a blurb from conservative provocateur Ann Coulter, who in the Clinton years was part of a team of right-wing attorneys who privately schemed to destroy the Clinton administration through the sexual harassment lawsuit filed against the president by an Arkansas woman named Paula Jones. The book also contains a preface written by Kathleen Willey, who in 1998 claimed that Bill Clinton sexually assaulted her in the Oval Office five years earlier when she had been a White House volunteer. (She later said the Clinton crew killed her cat.)

When Stone officially departed the Trump campaign in early August, there was a dispute over whether this veteran political operator (who relishes his reputation as a political brawler willing, if not eager, to get down and dirty) was fired or left on his own accord. Whatever occurred, Stone remained a cheerleader for Trump, appearing on cable television shows to hail the tycoon turned GOP front-runner. (“I’m the ultimate Trump loyalist,” he told the National Review.) Yet his separation from the Trump campaign was probably inevitable; otherwise, Trump could be directly tied to Stone’s vicious assault on the Clintons as rapists (actual and figurative)—an attack that has seemingly been a while in the making. This is not the sort of scheme an official presidential campaign could mount without bearing a tremendous wave of blowback and criticism. Would even Trump want to be associated with a crusade that insists Bill Clinton is a repeat rapist and his wife is a co-conspirator?

Stone says the book and the videos he has filmed to accompany it are part of “a large project” that he timed to be unveiled close to the primaries. His efforts certainly will recall the bitter and nasty fights—and the conspiracy mongering—of the Clinton years. And that may be the overall strategic point: not actually to prove all the terrible claims, but to remind voters of the yuckiness and controversies (some real, some preposterous) that once whirled about the Clintons. Then again, Stone seemingly does believe that LBJ engineered the JFK assassination.

Will Stone’s extreme anti-Clinton project gain any traction with voters beyond the Clinton haters of the right? It will be interesting to see how the media handle him when the book comes out. Will Stone remain a go-to booking for Trump stories? Might this project undermine his value as a Trump booster? Or will he be able to use his position as a major Trumper to peddle his zealous Clinton bashing?

By the way, Stone insists his muck-diving is not strictly partisan. He says he has another book coming out in January: Jeb and the Bush Crime Family.

Update: It turns out that Media Matters has done a lot of digging into Roger Stone’s co-author, Robert Morrow, and the picture isn’t pretty. In fact, it’s ugly. The Amazon.com description of the anti-Clinton book describes Morrow as “a political researcher and alternative historian with expertise on the Clintons, the Bush family, and the JFK assassination.” But his expertise regarding the Clintons seems to be more of a sexually-distorted obsession. In a 2014 Facebook post, Morrow wrote, “So do all your sexual fantasies about Hillary Clinton involve ‘snuff films?’ Probably not good for most of you to answer that question. Probably how Bill fantasizes.” In another 2014 Facebook post, he wrote—and, a warning, this is graphic: “Bill Clinton went down on Hillary one time. While he was licking her maggots started coming out of her pussy. Bill with a sickly look on his face looks up and says. “Sarge, I just can’t do this anymore.” Hillary, without missing a beat, grabs the back of Bill’s head and shoves it back onto her snatch and said “WHAT DIFFERENCE DOES IT MAKE?!!” In 2013, Morrow posted this on his Facebook page: “Hillary Clinton masturbation fantasy update. 3 HOURS 27 MINUTES 15 SECONDS. What is wrong with me? I am I getting old? Losing the passion? No matter how much I sniff Hillary’s panties which I bought off of Ebay, I can NEVER seen to be able to last more than 4 hours choking the chicken while thinking about her.” And there’s many similar posts, including several targeting Chelsea Clinton, and others containing sleazy attacks on Barack Obama, Michelle Obama, Rahm Emanuel, and others. This will not enhance the credibility of the book.

Stone tells me that Morrow is “an eccentric and a great researcher.” A 2008 newspaper profile of Morrow called him “a perpetually indignant, single 43-year-old, [who] pretty much devotes his life to hating the Clintons and spreading wild, unsubstantiated allegations about them.”

Update 2: After this article was published, Stone sent this message: “Please. Has nothing whatsoever to do with Trump—book two years in the writing—long before Trump decided to run for Prez—video project grew out of book—I am far more than “Trump’s # 1 supporter—New York Times Bestselling author—veteran of 10 Presidential campaigns.”