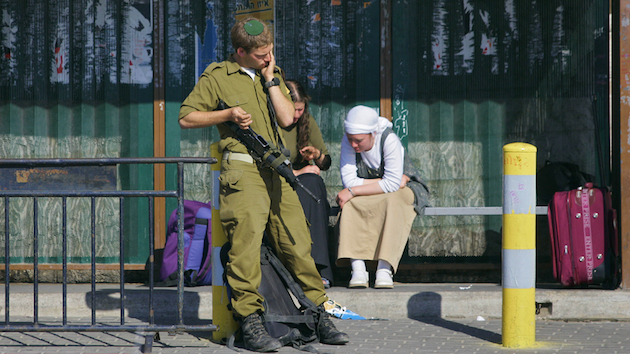 After a violent cycle of Palestinian attacks and Israeli military crackdowns this month, the death toll in Israel and the Occupied Territories stands at eight Israelis and 44 Palestinians. As the violence continues, Israel has sealed off East Jerusalem neighborhoods and run nightly police raids there. Plus, Israel has widened its military operations in the West Bank and Gaza.

Now, a new development has emerged. Encouraged by public officials, Israeli civilians are lining up at gun stores in droves to arm themselves, and the National Rifle Association is cheering them on.

The NRA is applauding the shift. On Friday, its lobbying wing, known as the Institute for Legislative Action, published an extended article celebrating Israeli citizens and their government for the relaxed policies.

“Some seeking arms recognize that the effects of carrying go well beyond their own personal safety,” the ILA said.

The NRA has an ongoing relationship with Israel. Over the years, it has sent delegations of high-level donors on tours of the country’s religious, political, and military sites. In July, NRA donors tried out new rifle models at Israel Weapon Industries, which manufactures Uzis. In 2013, another NRA donor delegation visited the Police Intelligence and Observation Center, which conducts 24-hour surveillance on Jerusalem’s Old City. There, an Israeli police spokesman described cooperation between the NRA and Israeli police to share tips on intelligence, operations, and gun policy.

Some fear that more handguns on the streets will fuel vigilante justice. A 29-year-old Eritrean immigrant, Haftan Zarhoum, was killed on Sunday after being shot by a security guard and beaten by a mob. The guard and mob had mistaken Zarhoum for an Arab gunman who had just opened fire in a bus station.

Israeli Prime Minister Benjamin Netanyahu warned Israelis against vigilantism on Monday. “We’re a nation of laws. No one may take the law into their hands. That’s the first rule,” he said.

Greater availability of firearms may also undermine a successful effort to prevent suicide among Israeli soldiers. The Israeli Defense Forces, which conscripts 18- to 21-year-olds, barred soldiers in 2006 from taking their guns home with them on weekend leave. After the change, the IDF reported a 40 percent drop in suicide rates among young soldiers, from 28 suicides per year to 17.