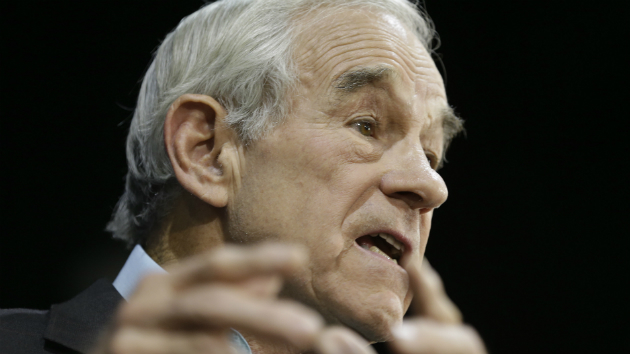 Former GOP presidential candidate Ron Paul testifies on Wednesday in the case of two former aides accused of trying to cover up a pay-for-endorsement scheme in the 2012 campaign. Steve Helber/AP

Former GOP presidential candidate Ron Paul took the stand in an Iowa federal courthouse this afternoon in the trial of two of his top aides from his 2012 presidential campaign. The aides have been accused of paying for the endorsement of an Iowa state senator and then trying to cover it up. Paul blasted prosecutors and the media while still testifying that he abhorred the concept of paying for endorsements.

Paul was called as a witness for the prosecution in the trial of Jesse Benton, his 2012 presidential campaign chairman who is also married to Paul’s granddaughter. Another longtime Paul family political operative, Dimitri Kesari, is also on trial. Kesari worked as deputy campaign manager in 2012.

The charges in the case stem from a scheme by Paul’s 2012 campaign to pay then-Iowa state Sen. Kent Sorenson more than $70,000 to endorse Paul in the days before the Iowa caucuses in late 2011. Four of the charges against Benton were dropped when a judge ruled that prosecutors had improperly handled the indictments. Benton still faces a count of making false statements to prosecutors after he denied any knowledge of the alleged plan when they asked him about it last summer. Kesari faces six charges, including federal conspiracy and campaign finance charges. Prosecutors also say Kesari attempted to convince Sorenson to not tell investigators everything he knew.

During his testimony, Paul switched between appearing almost politically naive—claiming he knew almost nothing of how his campaign paid expenses and telling a long folksy story of his dislike for political endorsements—and exhibiting fiery anger. Paul loudly denounced the prosecution for its case against Benton and the damage it has done to his son Rand’s 2016 presidential campaign.

When he first took the stand, Ron Paul told prosecutors that he had no idea how his campaign paid its bills.

“I don’t know the details, I trusted the people running the campaign to account for all the funds,” Paul initially said. “I don’t know who approved what, when.”

Paul’s story changed after federal prosecutor Richard Pilger presented to the three-time presidential candidate a copy of his grand-jury testimony from last year. In that testimony, Paul told investigators that if someone on the campaign spent money, “those bills would go through John [Tate] and Jesse.” Tate was also indicted along with Benton and Kesari, but charges against him were later dropped.

While he was on the stand Wednesday, Paul similarly said he was unable to recall what Kesari did for his 2012 campaign until Pilger showed him grand-jury testimony in which he described Kesari as an “assistant to John and Jesse.”

After being pressed by the federal prosecutor, Paul admitted that he remembered the press conference in late 2011, just a few days before the 2012 Iowa caucus, at which Sorenson made a surprise appearance to endorse Paul. Sorenson had previously endorsed Michele Bachmann’s campaign. Sorenson left a Bachmann campaign event to appear at Paul’s press conference to make his endorsement.

Paul said Wednesday that he had “mixed feelings” about Sorenson’s endorsement and was annoyed because no one on his campaign gave him any advance notice.

On the stand he also slipped into his popular persona of an anti-establishment grandfather figure. He told a long tale about a congressional campaign in 1996 in which his opponent lined up dozens of endorsements, including from “a couple of Bushes.” Paul got just one, Nolan Ryan’s—and he won anyway. Paul said he wouldn’t turn down an endorsement, but he would never shell out money for one.

“I don’t even believe in endorsements—you think I’d want to pay for it?” he asked.

Paul’s feelings about endorsements and his awareness of whether his campaign paid Sorenson are important because prosecutors are trying to portray Paul as the victim in the case, a characterization he strongly denied when asked about it by Kesari’s attorney. Paul’s voice grew loud and sharp as he complained about news accounts that said he was going to testify against his grandson-in-law Benton. The ordeal has put his family through a difficult process, he said.

“I didn’t even know I could be compelled to testify against my family. It’s been a heavy burden,” he said. “When you see all this mess out there, the defendants didn’t victimize me, that’s a stretch.”

The trial, which opened Tuesday, is the end result of more than two years of turmoil for the Paul family. Rand Paul, who seeks the 2016 GOP presidential nomination, employed Benton and Kesari in earlier campaigns, and relied on Tate and Benton to run America’s Liberty, the only pro-Rand Paul super-PAC that he explicitly endorsed. As his father testified, the younger Paul was campaigning across Des Moines, only a few miles from the federal courthouse. He has steadfastly insisted he knows little about the charges or how they might affect his campaign.  However, many members of his father’s 2012 campaign now work for him, or for the super-PACs supporting him. A number of his top aides and political operatives, including his top strategic advisor, Doug Stafford, and mass-mail and email guru Mike Rothfeld, are listed as potential witnesses in the trial.

The indictments against Benton, Kesari, and Tate were handed down in early August, the day before the first GOP presidential debate. On the witness stand, Ron Paul cried foul about the timing.

After testifying, Paul left the courthouse, leading his daughter Lori Pyeatt, who also testified for the prosecution, followed by a flock of reporters. He walked swiftly, refusing to comment.

Benton and Kesari’s attorneys are not contesting that Sorenson was paid, but have argued the payments are a normal part of the political process.

The criminal charges originally filed against Benton and Tate (and that still stand against Kesari) accuse the men of conspiring to pay Sorenson through a middleman. A Maryland company with ties to Kesari’s brother had done no actual work for the campaign but billed the campaign for “audio/visual” work. In court Wednesday, prosecutors showed the jury emails that appear to show Kesari coaching Sorenson through the process of providing the Maryland company with false invoices and then helping to push the payments through the campaign.

Sorenson pleaded guilty to helping the campaign file misleading disclosure reports with the Federal Election Commission last year and is expected to testify for the prosecution. It’s not illegal under federal law for campaigns to pay for endorsements, but it was against Iowa Senate ethics rules for Sorenson to be paid, which prosecutors say is the reason that the campaign went to such great lengths to hide the payments.

Also, Sorenson and Benton publicly denied Sorenson was being paid by the Paul campaign after Bachmann accused Sorenson of switching sides for money. In court, prosecutors presented emails between Kesari, Benton, and other Ron Paul campaign staff suggesting they deliberately withheld paying Sorenson in the final days of 2011 so that the payments would not show up on FEC reports that were about to be filed.

Paul’s testimony concluded on Wednesday. The trial is scheduled to continue into next week.