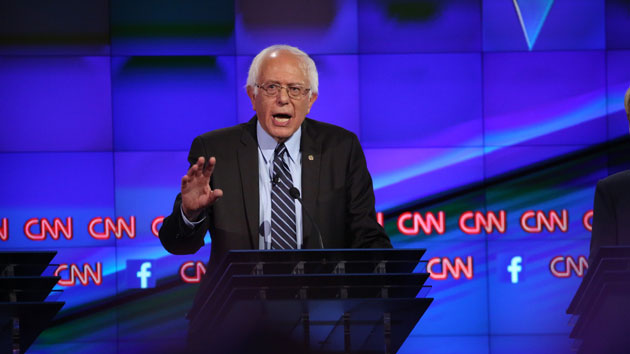 When Bernie Sanders was asked at a recent Democratic presidential forum to name his dream job, the Vermont senator didn’t hesitate. “President of CNN.” The South Carolina audience laughed—and so did his interrogator, MSNBC’s Rachel Maddow. But Sanders was dead serious. “If I was president of CNN, trust me, the way media deals with politics would radically change,” he said.

Of that, there’s little doubt. Republican candidates have fumed publicly about slanted questions posed by the moderators at last month’s presidential debate hosted by CNBC, accusing the pro-business cable network of holding the GOP contenders to a tougher standard than their liberal counterparts. But they’re not the only ones who believe the media is broken. Sanders’ critique of mass media is much older, more sophisticated, and runs far deeper than mere accusations of bias. It is a theory he’s trumpeted since before he won his first election in 1981, and it goes to the heart of his critique of the capitalist system. He believes the media is making us dumber, making us poorer, making us sicker, and rotting the democratic system to its core.

Sanders’ views on the corruption of corporate-owned media had crystallized before he was elected mayor of Burlington, Vermont, thirty-four years ago. Two years earlier, in 1979, he penned an op-ed for the Vermont Vanguard, a now-defunct left-leaning newspaper, entitled “Social Control and the Tube.” It was a manifesto of sorts. Comparing television to heroin and alcohol, he called it an “escapist mechanism” that numbed the pain of everyday life. The big banks and corporations that owned the networks, he argued, were saturating the airwaves with nonsense—”using the well-tested Hitlerian principle that people should be treated as morons and bombarded over and over again with the same simple phrases and ideas”—in order to prevent the nation’s oppressed classes from recognizing how bad they had it.

“What the owners of the TV industry want to do, and are doing, in my opinion, is use that medium to intentionally brainwash people into submission and helplessness,” he wrote. “With considerable forethought they are attempting to create a nation of morons who will faithfully go out and buy this or that product, vote for this or that candidate, and faithfully work for their employers for as low a wage as possible.”

The very nature of commercials, Sanders believed, was changing the human brain in ways that were antithetical to a free society.

If…one’s thought pattern is interrupted 20 or 30 times within that hour by totally separate concepts, such as talking cats, feeling free with Coke and Pepsi, improving your sex life with Close-Up Toothpaste, getting relief from hemorrhoids, donating money to wipe out cancer, doing away with bodily odors, getting whiter washes, etc., etc. etc.—what happens to the ability of the mind to think, to concentrate, to analyze?

Sanders was on the front lines of the fight to democratize the media. As he was railing against toothpaste ads in the Vanguard, he was taping a 30-minute documentary on the life of his idol, Eugene Debs, the socialist who ran for president, in 1979. The final product was “technologically very poor,” he later admitted, but Sanders was adamant that the documentary should be aired statewide on Vermont Educational Television, a public broadcasting station. The station told Sanders thanks but no thanks—the film was too liberal.

“We stood up,” Sanders explained later. “We fought back; we got the program on not only once, but twice; we had the head of the station fired; we had a revolution; and while the station’s not great today, it’s a lot better than it was then.”

As Burlington mayor, Sanders used his bully pulpit to rip into the press with regularity. That in itself was not unusual—politicians generally enjoy a contentious relationship with the reporters who cover them. But his focus went beyond day-to-day gripes with how he was being covered, and extended to the corporate ownership of media companies and the evils of televisions as means to indoctrinate the masses. The clearest articulation of his views came in 1988, when he spoke at a panel celebrating the tenth anniversary of the Vermont Vanguard. The mayor shared the stage with well-known political activist and counterculture icon Abbie Hoffman, who led the protests at the 1968 Democratic convention in Chicago.

Sanders contended that the corporate interests which own media companies were deliberately attempting to undermine the American education system. “Television is a better way to manipulate people’s minds than through books and it’s good to have illiteracy and that’s probably why we have it,” he said. “But what’s going on now is the media is giving up to a large degree any pretense at serious journalism, it’s simple, and stupid, and color pictures.”

He believed that if nothing changed, the affects on society would be catastrophic. He argued that television was causing psychiatric damage in kids, and that the state medical school in Burlington should study the effect of 30-second ads on the human brain. “Abbie Hoffman is right,” Sanders concluded, “television is the major drug problem in the United States.”

An ardent supporter of the leftist Sandinistas in Nicaragua, who then controlled the government, Sanders was furious with the US media coverage of Nicaraguan president, Daniel Ortega. “Ronald Reagan has said that he’s a communist and if you say the word communist over and over again then you create the truth,” Sanders said during the panel with Hoffman. “And it is not essentially different from what goes on in the Soviet Union. There the party makes the lie and the media copies it to a very significant degree; here the government creates the lie and the lie continues.”

It was a refrain he returned to again and again. In 1985, during his second term as mayor, Sanders appeared on a televised panel called “Does the Media Lie?” The forum pitted a group of politicians, including Sanders and former US Sen. Jim Jeffords, against members of the Vermont political press with whom the mayor had sparred. Half an hour into the forum, Sanders asked a reporter his first question: “What is a communist?”

Because Sanders hated 30-second local-news segments and unserious stories, he developed a reputation among the local press corps as antagonistic. (He once brought a 60 Minutes camera crew into the Associated Press’ Montpelier bureau so the crew could watch him grill reporters about their coverage.) He could be relentlessly on message and took offense when reporters asked him about something other than what he wanted to talk about that day. And he rejected the very idea of “news” as something that must be new.

“Obviously you would be very excited if we stood on our heads and we held the press conference swimming in the lake, because that would be a news story—it’d be very exciting,” Sanders explained during the 1985 televised panel. “It’s not absurd! That’s what’s news. ‘Five lunatics today were swimming in the icy cold water of Lake Champlain and all the news media were there and they talked about tax reform while you were there.’ It’s boring when you just talk about important issues‚ it’s got to be hyped up.”

He believed he should have his own forum on television, much like a president, to convey his message without a media filter. When he visited Nicaragua, for instance, he’d been enthralled by a television show Ortega hosted, in which Ortega simply spoke with the people, they relayed their concerns, and he made his case. The result was Bernie Speaks With the People, a quirky television show on Chittenden Community Television in Burlington, that allowed Sanders to speak directly to the camera once a week.

When he released his first book, Outsider in the House, in 1997, Sanders, by then a member of the US House of Representatives, took dead aim at what he called “America’s untold story“—corporate-owned media. “The problem with television is not just what is reported but, more importantly, what is not reported,” he wrote. “It’s no accident that we get thousands of hours of discussion about the O.J. Simpson trial and almost no discussion about the growing gap between rich and poor or our regressive tax system. Why is it that there is massive coverage of airplane crashes, but almost no coverage of corporate disinvestment in the United States?”

While conservatives howled about their own treatment in the press, at least they had friendly talk shows. “[D]espite the fact that 15 million Americans are trade unionists, there isn’t one national television program exclusively devoted to discussing the goals and problems of the trade union movement, and the needs of American workers,” Sanders complained. “In fact, most Americans have never seen even one prime-time television show on the positive role that trade unions have played in protecting the lives of working Americans.” (When Ed Schultz, a major union advocate, lost his MSNBC show in July, Sanders tooks the unusual step of releasing a statement, saying he was “disappointed that Comcast chose to remove Ed Schultz from its lineup.”)

This time Sanders had some solutions. First, the Justice Department should use its anti-trust powers to break up the biggest media conglomerates. Second, he would direct more funding to public broadcasting. And third, he would revamp the Federal Communications Commission. He argued that the networks should be compelled to offer time for public-service programming (like debates or political addresses), and he declared that “those with opposing views should have the right to respond to viewpoints expressed on the station.”

These days Sanders talks less about the media than he used to, perhaps because, now that he is running for president, he needs media attention more than ever. But the MSNBC-hosted forum in South Carolina was a glimpse of vintage Bernie, articulating his long-held theory of revolutionary change—that the best way to change the system is to take it over.