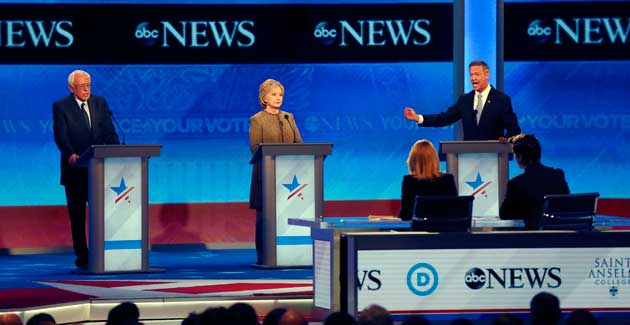 The third democratic presidential debate was held Saturday night at Saint Anselm College in New Hampshire, and it covered a wide range of issues, from terrorism and the heroin epidemic to family leave and student debt. Former Maryland Gov. Martin O’Malley ratcheted up his attacks on his rivals, while Hillary Clinton seemed more assured of her place as the presumptive Democratic nominee, training her fire on her Republican opponents. Sanders entered the debate with his campaign in damage control mode over news that at least one of his staffers had improperly accessed the Clinton campaign’s voter date, but he still managed to mount a solid performance. Here are some of the most memorable moments from Saturday’s debate:

Sanders apologizes to Clinton for his campaign’s breach of her voter data: On Friday, news broke that at least one Sanders campaign staffer had accessed portions of the Clinton campaign’s voter data when a firewall—maintained by a contractor—had temporarily failed. (See here for an explainer on the data flap.) The staffer who took advantage of this data breach was promptly fired by the campaign. Asked about the controversy, Sanders provided some brief background on the incident but then promptly apologized to Clinton, a moment that garnered great applause from the audience. “I want to apologize to my supporters,” Sanders added. “This is not the type of campaign that we run, and if I find anybody else involved in this, they will also be fired.”

O’Malley accuses Sanders and Clinton of flip-flopping on gun control: Moderator Martha Raddatz asked the candidates about a recent poll showing that more Americans believe that arming people, rather than stricter gun laws, is the best defense against terrorism. Clinton came down strong against this idea, and Sanders spoke in favor of strengthening background check laws and closing the gun show loophole. The exchange got  testy when O’Malley forced his way into the exchange, over the protests of the moderators, to talk about his record of passing an assault weapons ban in Maryland. He accused Sanders of voting against gun control policies in the past and Clinton of flip-flopping on the issue. Sanders and Clinton were not pleased with that characterization:

“Whoa, whoa, whoa, lets calm down a little bit, Martin,” said Sanders. “Yes, lets tell the truth, Martin,” Clinton said. She added, “I actually agree with Governor O’Malley about the need for common sense gun safety measures. And I applaud his record in Maryland. I just wish he wouldn’t misrepresent mine.” Here’s the full exchange:

Sanders dodges question on racial profiling of Muslims: Muir asked Sanders to discuss racial profiling of Muslims. He pointed to the couple behind the shooting rampage in San Bernardino, California, whose neighbors said they grew suspicious after seeing packages being delivered to the couple’s home but did not report them for fear of being accused of profiling. Muir asked Sanders what he would say to Americans who “are afraid to profile.” Sanders delivered a glib response: “Well, the answer is, obviously, if you see suspicious activity, you report it,” said Sanders. “That’s kind of a no-brainer. You know, somebody is loading guns and ammunition into a house, I think it’s a good idea to call 911. Do it.” When pressed to answer the question about racial profiling, Sanders instead spoke about his economic policies.

Clinton doesn’t really understand how encryption works: In light of the alleged use of encrypted communications in planning the Paris terrorist attacks, moderator Raddatz asked Clinton whether she would pass a law requiring tech companies to give the government access to encryption keys—a move that Silicon Valley opposes. Clinton responded with something of a non-answer, admitting that she doesn’t understand how encryption technology works and calling for a middle ground between encryption and non-encryption: “I would hope that, given the extraordinary capacities that the tech community has and the legitimate needs and questions from law enforcement, that there could be a Manhattan-like project, something that would bring the government and the tech communities together to see they’re not adversaries, they’ve got to be partners.”