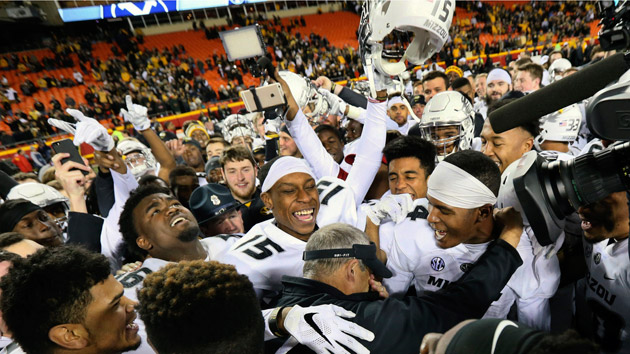 State Rep. Rick Brattin told Columbia, Missouri-based radio station KTGR on Tuesday that his bill to revoke the scholarship of any college athlete who refused to play in games for reasons other than health was inspired by the Missouri football players who threatened to boycott games this fall.

“I’m not against people’s First Amendment rights and speaking their minds and doing what they believe is right,” Brattin told hosts of The Big Show. “But they also had an obligation to play football, and they utilized their position as a football player to go on strike and put the university in a horrible situation. I don’t think that’s good conduct of a football team.”

When asked whether the players should be considered employees, Brattin responded: “They have to play to continue with their scholarship…They have certain parameters they have to live by.”

You can listen to the rest of the interview below.

On November 7, more than 30 football players at the University of Missouri linked arms and threatened to boycott games and practices over the university’s handling of a series of racially charged incidents on campus. The players’ involvement brought nationwide scrutiny to ongoing Mizzou protests, and two days later, university president Tim Wolfe and school chancellor R. Loftin Bowen resigned.

It was a huge win for the growing campus anti-racism movement. But under a new bill filed in the Missouri Legislature, the athletes who participated in the boycott could have had their scholarships revoked, based on their refusal to play.

House Bill 1743, filed by Rep. Rick Brattin on Friday, would allow colleges and universities to revoke student-athletes scholarships if they decline “to play for a reason unrelated to health.” The bill’s language has not yet been released, so it’s unclear if the bill covers all athletes in the state or just those at public institutions.

As Steve Silver, a lawyer based out of Philadelphia, points out at Above the Law: Redline, Brattin’s proposal reinforces the idea that college athletes have few, if any, rights and that public universities can use a college scholarship as “collateral for preventing athletes from exercising their First Amendment rights.” But, Silver argues, the proposal acknowledges that athletes operate under a different set of rules and that it violates the state’s own constitution: “Revoking a scholarship if an athlete elects to strike as a form of protest certainly seems like a strong way of the government impairing speech.”

This isn’t the first time that Brattin has introduced a controversial bill. Two years ago, Brattin raised a bill that would require Missouri schools to give equal textbook treatment to intelligent design and “destiny” as the study of evolution. And as we wrote last year, he brought a bill that would’ve forced pregnant women to obtain permission from the baby’s father if they wanted to get an abortion. In January, Brattin put forward a bill protecting outdoor spaces at public colleges and universities as public forums. All three measures failed to pass.