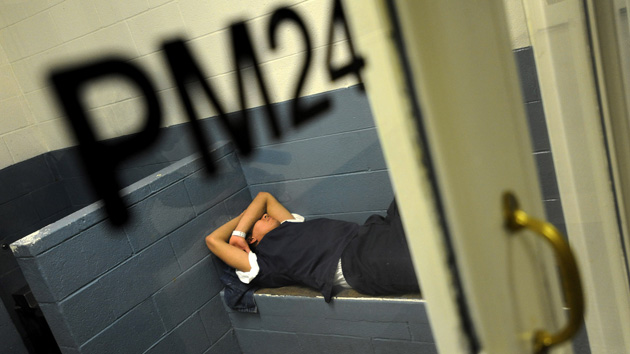 An inmate at the Central Jail Complex at the sheriff's headquarters in Santa Ana, California, in 2009. Michael Goulding/Zuma

It was after dark on a Monday last December, and Nicole Albrecht, 33, waited barefoot in a booking cell at Santa Ana City Jail in Orange County, California. She wasn’t new to the jail: She’d first been detained in 2014, after coming to the United States from her native Germany and overstaying her visa. That day, though, she’d been out for a court hearing for her immigration case, and on her way back inside three female officers had ordered her to remove her socks and shoes so they could search her. But when they’d demanded she take off the rest of her clothes, she’d refused.

“I felt completely humiliated. It was disgusting to me,” she later told me in a phone interview. Albrecht had tried to get the officers to read an Immigration and Customs Enforcement (ICE) manual she’d brought back from court, stating that the jail could not make her strip unless it believed she was hiding contraband, like a weapon or drugs. But instead they’d pulled her arms behind her back, handcuffing them and leading her, still barefoot, to the booking cell downstairs.

According to a complaint filed to local and federal authorities this week, guards then said that if Albrecht refused to be subject to a search, they would hold her there all night—without food or a bed, she says—and they’d transfer her the next morning to another facility. Afraid to move farther away from her attorney and her husband, a US citizen based in Los Angeles, she finally agreed to peel off her clothing.

Women complain that strip searches have been conducted at the jail without reasonable suspicion, by members of the opposite gender, in view of other detainees, and in unsanitary conditions.

Albrecht is one of 31 women who say they have been subject to illegal strip searches at the Santa Ana jail while in the custody of ICE, which has a contract with the city of Santa Ana to detain them there. Their complaint, filed by the advocacy group Community Initiatives for Visiting Immigrants in Confinement (CIVIC) to ICE and the Department of Homeland Security on Monday, says strip searches have been conducted at the jail “without reasonable suspicion, sometimes by members of the opposite gender, in view of other detainees, [and] in unsanitary conditions.”

The women argue that they routinely undergo strip searches after returning from court hearings or meetings with their attorneys. “These searches are conducted under a blanket policy, practice, or custom,” the complaint says. It alleges that some women were required to strip down while menstruating, causing them to bleed on the floor. In some cases, it adds, multiple women returning from court at the same time were searched in front of each other, rather than in private, as federal law requires. (The jail denies that women have ever been searched at the same time in view of one another.)

In response to the allegations of illegal searches, Christina Holland, the Santa Ana jail administrator, says, “If they’re here as a federal individual and they’re going to be housed in our facility, before they go upstairs they’re likely going to be strip searched.” She says it doesn’t matter whether a detainee has committed a crime or merely a civil violation, like overstaying a visa—but adds that the strip searches are not a “blanket policy,” and that each case is determined individually. She cites a 2012 Supreme Court case, Florence v. Board of Chosen Freeholders, which states that jails can strip search anyone who is arrested, even for minor offenses, before he or she is admitted.

Brandon Garrett, a professor at the University of Virginia School of Law who is not involved in the complaint, says it’s not clear whether the Florence ruling would also apply to immigrant detainees. “These people are not being detained for any criminal offense, yet they are being kept in a jail—it raises real constitutional questions,” he says.

The Santa Ana jail’s own policy states that officers can only conduct these searches if there’s “reasonable suspicion”—like fresh needle marks, tobacco odor, or a “level of nervousness”—”to believe the arrestee is concealing a weapon or contraband.” According to this policy, a “professional appointment,” like a court hearing or an unsupervised meeting with a lawyer, is grounds for reasonable suspicion. Meanwhile, ICE standards state that “unless there is a specific and articulable suspicion that contraband has been transferred to a detainee,” he or she should not be strip searched after meeting with an attorney.

Nearly half of those represented by the complaint are transgender women immigrants, and many say they were forced to undergo strip searches by male officers.

Nearly half of those represented by the complaint are transgender women immigrants, many of whom say they were forced to undergo strip searches by male officers. One of these detainees says officers “pointed at her in a mocking manner” after ordering her to lift her penis.

Strip searches must be conducted by a guard who’s the same gender as the detainee, according to ICE standards and the Prison Rape Elimination Act, a federal law. According to the CIVIC complaint, the jail’s policy seems to “conflate gender identity and sex.”

“We strip search according to the biology of the individual,” says Holland. “They may feel they are female and identify as female, but legally we have to conduct searches in accordance with the law,” including California’s penal code.

The Prison Rape Elimination Act (PREA)—which also applies to jails housing immigrants—does not specify whether a male or female officer should search a transgender woman detainee. Michela Bowman, a co-director of the National PREA Resource Center, notes that the PREA standards “absolutely do not” mandate that such a search be conducted by “staff of the same biological sex or anatomy.” Instead, she says, “they require transgender inmates’ needs to be assessed on a case-by-case basis,” with the option of asking the detainee to identify whether he or she would feel more comfortable with a male or female officer.

“For many transgender immigration detainees—many of whom are asylum seekers fleeing violence in their home country—this experience can be extremely traumatizing,” Derek Murray, a Justice Department-certified auditor for PREA standards, says of the strip searches. He notes that the humiliation of trans people is pervasive in jails, detention centers, and youth centers across the country.

Last year, ICE put out a memo urging respect for the gender identity of transgender detainees. Lori Haley, an ICE spokeswoman, told Mother Jones that ICE standards “specify that cross-gender [strip] searches shall not be conducted unless staff of the same gender is unavailable.”

ICE says the CIVIC complaint about strip searches in Santa Ana “will be referred to the appropriate entity for further investigation.” In response to my questions about the allegations in the complaint, the agency stated that it has “a zero tolerance policy for any kind of abusive or inappropriate behavior in its facilities and takes any allegations of such mistreatment very seriously…In instances where misconduct by custodial personnel is substantiated, prompt and appropriate action will be taken.”

“These strip searches are incredibly humiliating, frightening, and can cause flashbacks and PTSD,” says the ACLU’s Tasha Hill.

The accusations of illegal strip searches come at a time of heightened scrutiny on immigrant detention facilities across the country. Starting in October last year, hundreds of immigrants and asylum seekers nationwide went on hunger strike to protest what they describe as abusive treatment and long periods in detention facilities, where they have been forced to stay as they fight their cases in front of US judges.

“Folks who are in immigration detention are there on a civil detention, not for suspicion of committing any crime,” says Tasha Hill of the American Civil Liberties Union of Southern California, which signed onto CIVIC’s complaint. “They’re basically incarcerated for failing to fill out the proper paperwork. And these strip searches are incredibly humiliating, frightening, and can cause flashbacks and PTSD—and therefore should be used judiciously rather than as a blanket policy.”