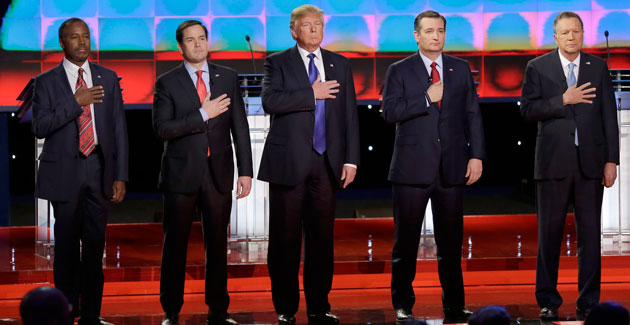 When the five remaining GOP candidates met Thursday night for the final debate before Super Tuesday, the stakes had never been higher. The first four contests are now over, and on Tuesday, voters in 11 states will head to the polls. Time is running out to slow Donald Trump’s momentum—and the urgency was palpable.

Going into this debate, the media had focused on the fact that Ted Cruz and Marco Rubio were more interested in attacking each other than stopping Trump. But on Thursday night, that began to change. Rubio, in particular, took aim at Trump and did not let up. Cruz was less dogged, but he did piggyback on several of Rubio’s attacks against the real estate billionaire. Rubio didn’t simply hammer the front-runner on policy issues—he also worked hard to convince voters that Trump is mired in lawsuits and scandal. The exchanges repeatedly devolved into yelling matches between the candidates.

The debate—the 10th for the GOP this primary season—was hosted by CNN and Telemundo in Houston and also featured John Kasich and Ben Carson, but it was the first without Jeb Bush.

Here are the top highlights from the debate:

Rubio dumps his entire oppo file on Trump. Rubio has decided to take on the front-runner. So the first chance he got, he practically unloaded his entire binder of opposition research on Trump, starting with the issue of immigration.

“You’re only person on this stage that has ever been fined for hiring people to work on your projects illegally,” Rubio said of Trump. “You hired some workers from Poland—”

“No, no,” Trump cut him off. “I’m the only one on the stage that’s hired people. You haven’t hired anybody.” (You can read more about that controversy here.)

Trump and Rubio exchanged many more words—often simultaneously—before their first battle of the night ended.

Cruz: Donald funded the Gang of Eight. Attempting to paint himself as the most hardline candidate on immigration, Cruz accused Trump of funding the Gang of Eight—the eight senators who crafted the failed comprehensive immigration reform bill in 2013.

“If you look at the eight members of the Gang of Eight, Donald gave over $50,000 to three Democrats and two Republicans,” Cruz said. “And when you’re funding open-border politicians, you shouldn’t be surprised when they fight for open borders.”

Trump responded, as he often has, by arguing that as a businessman he donated to politicians on both sides of the aisle and “got along with everybody.” Then he landed a punch of his own against Cruz: “You get along with nobody…You don’t have one Republican senator backing you—not one. You don’t have the endorsement of one Republican senator, and you work with these people. You should be ashamed of yourself.”

Trump’s wall just got 10 feet higher…again. Trump was asked about the feasibility of his plan to build a wall along the southern border and force Mexico to pay for it, given former Mexican President Vicente Fox’s recent comments that “I’m not going to pay for that f-ing wall.” The real estate mogul responded—as he has in the past when current and former Mexican officials have scoffed at his proposal—by saying, “The wall just got 10 feet taller.”

Trump defends Planned Parenthood. You heard that right. First Trump goes after John McCain, then Megyn Kelly. He blamed 9/11 on George W. Bush, and now he’s defending Planned Parenthood. While Trump went along with the rest of the Republicans in saying that he would defund the group because he is pro-life, he defended the work they do providing reproductive care and cancer screenings. His position may not make a lot of sense, but like much of what he says, it’s not often you hear it on a GOP debate stage.

Rubio-bot tries to nail Trump for repeating himself. After Trump made several similar comments about health care, Rubio tried to go after him with the same line of attack that Chris Christie had used so effectively against Rubio earlier this month. “Now he’s repeating himself,” Rubio exclaimed.

“No, no, no,” Trump responded. The two then hurled insults at each other while the moderators tried to stop the argument.

“I watched him repeat himself five times four weeks ago,” Trump said, referring to the New Hampshire debate.

“I just watched you repeat yourself five times five seconds ago,” Rubio shot back.

“I watched him melt down on the stage like that, I’ve never seen it in anybody…I thought he came out of the swimming pool,” Trump said.

“I see him repeat himself every night. He says five things,” Rubio said. “Everyone’s dumb, he’s gonna make America great again…We’re going to win, win win, he’s winning in the polls…And the lines around the state.”

Trump: “I want to release my tax returns, but…” A day after Mitt Romney went on Fox News to suggest there might be a “bombshell” in Trump’s tax returns, Trump declared Thursday that he would love to release his returns but…there’s a hiccup. Trump explained he has for years been audited by the IRS, which he claimed prevents him from releasing four or five years’ worth of returns.

“As far as my return, I want to file it, except for many years I’ve been audited every year,” Trump said. “Twelve years, or something like that. Every year they audit me, audit me, audit me…I will absolutely give my return, but I’m being audited now for two or three years, so I can’t do it until the audit is finished, obviously. And I think people would understand that.”

No legit reason @realDonaldTrump can’t release returns while being audited, but if scared, release earlier returns no longer under audit.

.@realDonaldTrump taxes for last 4+ years are still being audited. There are more #bombshells or he would release them.

But will they let people die in the streets? Trump drew a clear line in the sand on health care. He won’t allow people to die in the streets. Cruz, in full prosecutor mode, tried to pin down the real estate mogul on his stance on whether the federal government should pay for Americans’ health care. “Did you say, ‘If you want people to die on the streets, if you don’t support socialized health care, you have no heart’?” Cruz asked, looking as if he might score big points with the pro-dying-in-the-streets demographic.

“I will not allow people to die on the sidewalks and the streets of our country if I’m president!” Trump answered.

Notably, Cruz and Rubio (who also wiggled his way into the exchange) did not commit to the same.

Russ Choma and Dan Schulman contributed to this story.