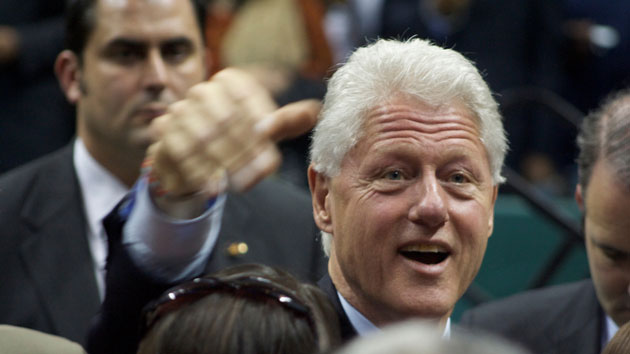 On Sunday, former President Bill Clinton showed Bernie Sanders what happens when the big dog gets off the porch.

With Hillary Clinton in Flint, Michigan, to meet with the mayor about the city’s water crisis, the former president had the state to himself, and he gave the Vermont senator a piece of his mind. He mocked Sanders as unrooted from reality, joking, “When you’re making a ‘revolution,’ you can’t be too careful with the facts.” Clinton referred to Sanders as “hermetically sealed.” He called Bernie’s supporters “sexist” and “profane” (a nod to the so-called “Bernie Bro” phenomenon) and reprised the mostly forgotten December scandal over Sanders’ campaign accessing Clinton’s voter data (for which Sanders apologized). “‘I tried to loot information from the other guy’s computer and I raised a million dollars out of it,'” Clinton said, offering his guess at what was going through Sanders’ mind.

It was the most direct personal attack from either candidate’s campaign this election cycle, two days before the primary. And by the next day, Bill Clinton appeared to have shaken the whole thing off. On Monday night in Hudson, joined by his daughter, Chelsea, a smattering of New Hampshire elected officials, Massachusetts Rep. Joseph Kennedy III, and Ted Danson (!), the former president offered a more subdued critique of the Vermont senator. Referring to his wife, he began his remarks by saying, “Sometimes when we’re on a stage like this, I wish we weren’t married, so I could say what I really want to say—and I don’t mean that in a negative way.” What he meant was that he had to self-censor his riffs for the good of the campaign. (Not that it has stopped him in the past.)

Instead, he offered an olive branch, or something like it, to the Sanders supporters he’d broadly characterized as “vicious” trolls on Sunday. “A lot of the young millennials think they’ll never move out of their parents’ house, never get a job that’s worth having, never be able to change,” Clinton said, before channeling a bit of Sanders’ own stump speech. “If they want to start a small business they won’t be able to get a loan. I get why a lot of people are mad. I get how frustrating it is, when most of the gains have gone to the top 1 percent, and 90 percent of them since I left office have gone to the top 10 percent. I get why people are upset when they hear the president tell the truth—the absolute truth—[that] we are the best-positioned country for the 21st-century, our economy is up over all the other big economies, but 84 percent of the people have not gotten a raise…I get it.”

“The question is, what are you gonna do about it?” he continued. “And the one thing I really appreciate about New Hampshire is that here finally the dam broke in the polarization of the campaign and we actually began to be free to discuss who’s got the better ideas.”

Clinton, though, couldn’t help getting taking another shot at Sanders’ frequent invocations of the “establishment,” suggesting that such a label unnecessarily tarred politicians who had put their careers on the line to vote for Obamacare, such as former Arkansas Sen. Mark Pryor. (“Establishment” is a nebulous term, but Pryor, the son of former Arkansas governor and senator David Pryor, surely fits most definitions of it.)

There’s an interesting dynamic between Hillary Clinton and Sanders that, if you go to a few events, you can pick up on. When Clinton takes the stage, she’s following a group of well-known Democratic politicians or activists—Al Franken, Jeanne Shaheen, Lena Dunham, Bubba. When Bernie takes the stage, often enough it’s just Bernie. And that’s fine; he’s leading in New Hampshire, something practically no one saw coming last spring. But in a fight like the one the Democratic primary is careening toward if Sanders wins big on Tuesday, it’s good to have someone in your corner who can draw some blood. And Bill Clinton sounds like he’s relishing a fight.