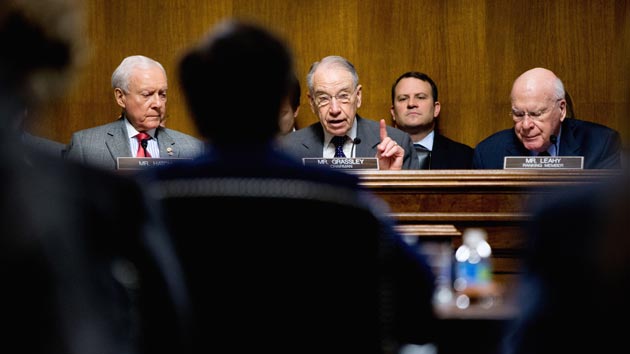 President Obama’s Supreme Court nominee is likely to be announced any day now, but the Senate Judiciary Committee, which has promised to take no action on the nomination process of a new justice until after the presidential election, is focusing on another issue: abortion. Specifically, those performed after 20 weeks gestation, which comprise slightly more than 1 percent of all the procedures carried out in the country.

The committee held a 2-hour hearing Tuesday about a measure proposed by Sen. Lindsey Graham (R-S.C.) banning abortions after 20 weeks, with exceptions for cases of rape, incest, and where the life of the mother is in danger. The bill is based on the premise that fetal brain and neural development is so advanced by 20 weeks that the fetus is capable of feeling pain—a concept that medical consensus says is highly unlikely and virtually impossible to prove. Many medical providers, such as the American College of Obstetricians and Gynecologists, oppose the bill, noting that is based on debunked science and harms women who are faced with especially difficult decisions about their pregnancies. Planned Parenthood issued a statement on Tuesday condemning the hearing: “Republican leadership wants to waste taxpayer time on a rejected piece of legislation that leading doctors flatly oppose.”

A version of the legislation already failed once, a point Sen. Dianne Feinstein highlighted at the start of today’s committee hearing. In September 2015, this bill was defeated before the Senate, she said, calling the current version an example of “a sustained political effort to make it as hard as possible for women to access healthcare that should be safe and legal.” She spoke about her years at Stanford University in the 1950s, when friends with unwanted pregnancies would travel to Mexico for illegal abortions, or wanted to take their own lives.

“I know what life was like for young women before Roe,” she said, citing data published in the last year showing an alarming uptick in women seeking information on, or even attempting, self-induced abortions.

Seven witnesses testified, including Melissa Ohden, an anti-abortion speaker who refers to herself as an “abortion survivor.” Her mother attempted to abort her at what she believed was 18 weeks via a saline abortion—a now rarely-used means for terminating pregnancy. She regularly tells her story of surviving this 1977 abortion attempt on TV and radio programs, and spoke at a 2015 Congressional hearing about Planned Parenthood’s fetal tissue donation program.

Dr. Diana Green Foster, a professor in the Obstetrics and Gynecology department of the University of California, San Francisco, presented findings from her study of women who sought late term abortions, the largest such study ever conducted. It followed nearly 1000 women for five years, some of whom received an abortion just before the gestational limit, and others who were turned away. She noted that unlike women who were able to get abortion care, the women who were turned away were more likely to be in poverty three years later, and in the long run were also more likely to be on public assistance and less likely to have a full-time job. For those women who already had children, Foster said, being turned away from abortion care brought negative consequences for their existing children: an increase in missed developmental milestones, and higher likelihood of living in poverty.

In one tense moment, Sen. Graham focused on the testimony of attorney Angelina Baglini Nguyen from the anti-abortion research group the Charlotte Lozier Institute, in which she said that the US is one of only seven countries that permit abortions past 20 weeks of gestation. Graham saw this as evidence of the United States’ misguided abortion standards. Dr. Foster responded to Graham’s point with examples from countries that limit abortions including one example of a woman in South Africa who was referred to a “clinic” that ended up being a trailer behind a cell phone store. “Being part of this club where women can safely, legally access abortion might be the right club,” Foster said.

Towards the end of the hearing, Sen. David Vitter (R-La.) asked the entire panel if any of them disagreed with the idea that if a child is born alive, all available medical care should be provided if there’s any chance of survival—a point that is stipulated in the 20 week abortion ban bill. Dr. Foster pointed out that the bill does not provide options for a family and their doctors to decide to avoid medical intervention and spend that time saying goodbye to their child instead.

Christy Zink, one of the witnesses, spoke earlier about the abortion of a wanted pregnancy she had at nearly 22 weeks, after learning that the fetus was missing portions of its brain, would be unlikely to survive birth, and if it did survive, would likely live a life of near constant seizures and pain.

“This question of survival is more complicated,” she said, noting her own situation and the extensive conversations her family had with medical professionals before coming to their decision.

But Zink’s point about personal decision-making seemed lost on witness Dr. Colleen Malloy, Assistant Professor of Pediatrics-Neonatology at
Northwestern University, who responded, “There are plenty of children who are born with seizure disorders who don’t live a life of pain and suffering.”

One key point was hardly mentioned: The 20-week limit proposed in the bill would be unlikely to survive a constitutional challenge. The 1973 Supreme Court decision in Roe v. Wade stated that abortion must remain legal until the fetus is viable to survive outside the womb, a point it set at the start of the third trimester, typically 24 weeks. Still, many states have disregarded the question of constitutionality. In just the last year, 12 states have proposed 19 versions of a 20-week ban. This is in spite of the fact that proposed bans in number of states, including Arizona, Georgia, and Idaho, have been struck down by the courts.

Sen. Richard Blumenthal (D-Conn.) closed the hearing by referring to the recent uptick in violence at abortion clinics, wondering aloud about the possible causes.