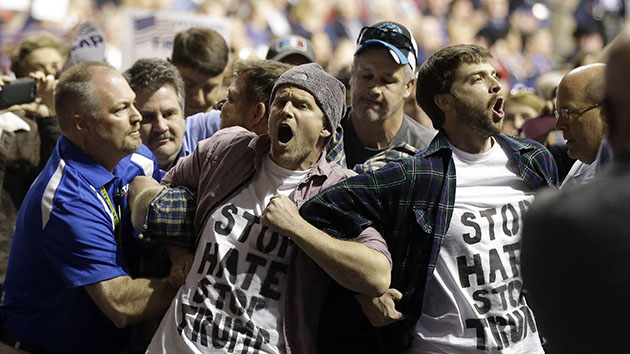 On August 8, 2015, after Sen. Bernie Sanders (D-Vt.) was interrupted by two activists at a campaign event in Seattle, Donald Trump weighed in on the incident. “That will never happen with me,” Trump said. “I don’t know if I’ll do the fighting myself or if others will, but that was a disgrace.”

Last month, Trump was interrupted by a protester at a rally in Las Vegas the night before the Nevada caucuses. As the man was escorted out, Trump told the crowd, “I’d like to punch him in the face.”

Trump has not himself engaged in violence—although his campaign manager has been accused of assaulting a reporter this week—but attendees at Trump’s rallies seem to be taking his suggestions to heart. Violence at Trump events has ramped up, and it now seems as though protesters and members of the press are routinely verbally or physically attacked.

Here is a roundup of violence against peaceful protesters and members of the press at Trump events.

“Make America racist again.” In September, Trump pledged in front of Trump Tower in Manhattan that he would not run as a third-party candidate. A protester holding a “Make America racist again” was confronted by a man who appeared to be a Trump Tower security guard. The guard snatched the sign from the protester, and when the protester attempted to retrieve it, the guard punched him in the face. A group of protesters later filed a lawsuit against Trump, his campaign, his company, and his head of security.

“She said she was going to take and rip the sign. Let’s see if she does it.” Also in September, a group of students at Iowa State called Students Against Bigotry staged a protest in the parking lot of the campus’ Jack Trice Stadium. They were confronted by a group of Trump supporters who hurled racial epithets and insults, and one woman reached out and tore a student’s signs to pieces.

“Get him the hell out of here, will you please?” Trump asked. “Get him out of here. Throw him out!”

The protester was shoved by the police out of the venue and heckled by Trump supporters, who shouted, “Get the fuck out of here, man,” and “Tase him!”

Following the altercation, Trump went on Fox News and said, “Maybe [the protester] should have been roughed up, because it was absolutely disgusting what he was doing.”

“These are not people.” A month later, at an event in North Carolina, Trump was interrupted no fewer than 10 times by different protesters, many of whom shouted, “Black lives matter.” Trump responded by waving them off and dismissing their concerns, as boos rained down from his supporters.

“These are not people,” Trump said. “Just remember that.”

“All lives matter…Are you from Mexico?” At Radford University in February, a group of young black organizers interrupted a Trump rally. With fists raised, they chanted, “Black lives matter,” as they were quickly escorted from the premises by the police. Trump responded, “All lives matter,” a refrain often used to dismiss the specific concerns of the black community. He also asked a Latina woman who was being led out of the auditorium whether she was from Mexico.

“I was called a nigger and a cunt. They pushed and shoved me.” On March 1, the same night that Trump became the overwhelming favorite to clinch the GOP nomination, a woman was attacked at a Trump rally in Louisville, Kentucky. Shiya Nwanguma, who was engaged in a silent protest, was hit, pushed, and verbally assaulted by people in the crowd. She and other activists briefly held up signs as Trump spoke, before they were confronted by other audience members.

The full story of the white supremacists who assaulted this Black student at a Trump rally.https://t.co/WPywX72tVOhttps://t.co/vpJrCxH1bP

“I was called a nigger and cunt. They pushed and shoved me. They were disgusting and dangerous.” – Shiya Nwanguma pic.twitter.com/Iz6HhLc3TO

“…He grabbed me by the neck and started choking me and then he slammed me to the ground.” Chris Morris, a photographer for Time, claimed a member of Trump’s Secret Service detail grabbed him by the neck as he left the press pen and threw him to the ground. A video taken by an attendee at the rally shows the agent taking Morris down.*

“I never sought to be part of the story.” Breitbart News reporter Michelle Fields wrote about her experience at a rally in Jupiter, Florida, on Tuesday night. Fields claimed that Trump’s campaign manager, Corey Lewandowski, “jolted” her backward by the arm and yanked her down, almost causing her to fall to the ground. Though this same version of events was reported by the Washington Post’s Ben Terris, the Trump campaign has profusely denied this ever happened.

Trump has built much of his campaign success on inciting anger among voters—anger at the government and the status quo for failing to improve their lives, but also anger at “others,” including Muslims, undocumented immigrants, and Mexicans, who are seen as a threat to their well-being. In this context, it’s hardly surprising that protesters, particularly those who don’t look like most people in the Trump crowds, are feeling the brunt of that anger, sometimes physically. It’s only a matter of time before another entry joins this list. We’ll keep it updated.

Correction: An earlier version of this article misstated the details of the altercation between Time photographer Chris Morris and the Secret Service agent.