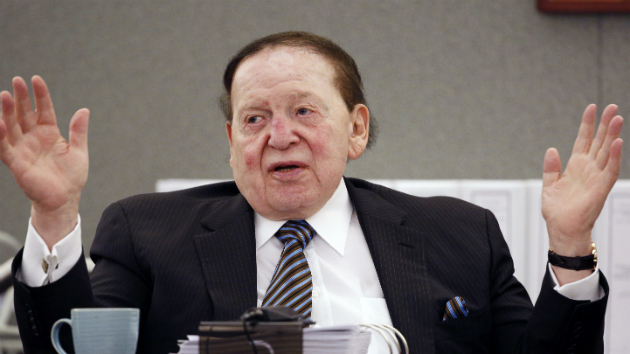 The casino run by major GOP financier Sheldon Adelson agreed today to settle a long-running Securities and Exchange Commission bribery investigation that has been swirling around Adelson’s Chinese operations. Las Vegas Sands will pay $9 million but won’t have to admit any guilt, and the SEC will close its investigation into possible violations of the Foreign Corrupt Practices Act.

In 2011, the Department of Justice and the SEC launched an investigation into Adelson’s company after a former executive accused the company of paying an intermediary to hide the company’s role in a variety of transactions, including transferring money to Chinese public officials. In the SEC press release on today’s settlement, the agency said Las Vegas Sands had failed to keep accurate records for more than $62 million in payments to an intermediary. According to the SEC, the money was given to the intermediary to buy a basketball team and arrange the purchase of a building from a Chinese state-run entity, for a “business center” that was never built.

According to the former Sands‘ executive, Steve Jacobs, who is now embroiled in a lengthy court fight with Adelson over his firing several years ago, the intermediary was a man named Yang Saixin, who was helping to organize the Adelson Center for US-China Enterprise in Beijing. Yang has denied any wrongdoing, but an internal Sands memo described him as influential and said his parents “knew [President] Xi Jinping’s parents, implying a strong connection to Zhongnanhai (the White House of China).” Adelson himself has denied any knowledge of plans for the center.

While the SEC settlement does not make it clear what the true purpose of the spending was, it does show that Adelson’s Chinese operations handed an enormous amount of money over to the intermediary. That intermediary was referred to in Sands internal documents as a “beard,” the SEC announcement said. The payments cited by the SEC today included:

In addition to paying the $9 million fine, Adelson’s company agreed to hire an independent consultant to monitor its internal finances for two years.

In its own statement, Las Vegas Sands downplayed Jacobs’ role in launching the investigation, and quoted Adelson as saying he was “pleased to have the matter resolved…We will build on this experience, which has reemphasized to our 50,000 team members worldwide the same values I have made the foundation of my seven decades in business—integrity and reputation matter.”