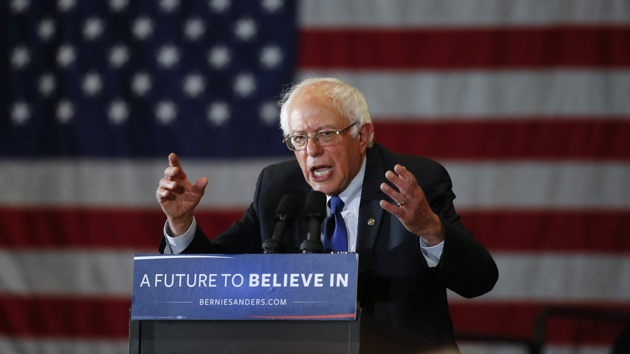 Bernie Sanders at a rally in Milwaukee Monday nightPaul Sancya/AP

The Trump and Sanders rallies shared a parking lot and start time, but all the energy was on Sanders’ side of the street. It was indicative of the mood of the Wisconsin electorate. Ahead of Tuesday’s primaries, the senator from Vermont has aroused a level of excitement—as well as poll numbers—that Hillary Clinton and her husband can’t match. On the Republican side, Trump has found a less receptive audience for his typical bombast, failing to pack venues or to maintain his lead in a state that now looks likely to hand him a stinging defeat.

Sanders sounded a jubilant note at a ballroom in the Wisconsin Center, where just two nights prior he’d spoken before a crowd of Democratic bigwigs more favorably inclined toward Hillary Clinton. “This is like a Greek chorus,” Sanders joked at one point after the crowd booed his mention of Scott Walker, the state’s unpopular Republican governor. “I say a name, and you respond.”

Sanders, who’s used Walker as a punching bag at campaign stops in Wisconsin throughout the past week, sounded confident that he’d add Wisconsin to his list of recent wins. “Let me talk about the momentum that you are feeling and I am feeling in this campaign,” he said. “We have won six out of the last seven caucuses and primaries. Not only have we won them, we’ve won every one by landslide victories. And tomorrow, if there is a good turnout here in Wisconsin, if there is a record-breaking turnout here in Wisconsin, we are going to win here as well.” After his speech, the Sanders campaign blasted out a press release bragging that 38,000 fans had flocked to his events in the Badger State over the past week.

Down the block a few hours earlier, Bill Clinton spoke to a much smaller mid-afternoon crowd at the Turner Ballroom. The contrast in style with Sanders couldn’t have been clearer. Where the Sanders campaign warmed up the audience with the largely forgotten, late-aughts synth band 3OH!3, Clinton was preceded by Rep. Gwen Moore (D-Wis.) and Milwaukee Mayor Tom Barrett. Throughout his speech, Clinton kept returning to a refrain intended to boost his wife’s credentials and rebuke Sanders. He would mention one of Hillary Clinton’s career accomplishments and punctuate it by saying, “That’s leadership, not establishment politics.”

Still, the scene belied that assertion, with the state’s establishment lined up in Clinton’s corner. If the voting bears out recent polls, it looks like the allegiances of the state’s political leaders haven’t done much to sway Democratic voters who live there.

The same dynamic is producing the opposite result on the Republican side. Ted Cruz, the state’s likely Republican winner, spent the day campaigning triumphantly around the state with Walker, who endorsed Cruz last week. The pair hit up the Mars Cheese Castle in Kenosha for some lighthearted fun, with Cruz ducking away from a fan who tried to plop a cheesehead atop his noggin and joking, “When they promise a cheese castle, you sort of expect to be able to eat the castle.”

Things weren’t as cheery for Trump. The candidate who’s filled stadiums in other states barely managed 50 percent occupancy at a 4,000-seat theater next to the circus. Wisconsinites didn’t even bother to show up and protest outside, with Trump becoming an afterthought in the state ahead of Tuesday’s vote.

Unlike on most primary days, when candidates visit their local offices to motivate volunteers and then schedule an evening rally to get prime-time TV coverage, almost everyone is fleeing the state ahead of the vote. Hillary Clinton was already campaigning Monday in New York, which goes to the polls on April 19. Trump has a blank schedule. Sanders is slated to speak with fans in Wyoming, which holds its Democratic caucus this weekend.

Only Cruz is sticking around Tuesday evening, and for good reason. While a Sanders win would help him build momentum, the Democrats’ proportional allocation of delegates means he won’t gain that much on Clinton and will remain a long shot to win at this summer’s party convention. Cruz, meanwhile, is banking on a contested convention—a scenario he discussed with reporters on Monday morning—which could enable him to secure the nomination on the second ballot or later. At this point, he needs to celebrate every minor victory he can eke out, hoping that it will be enough to deny Trump a first-ballot win.