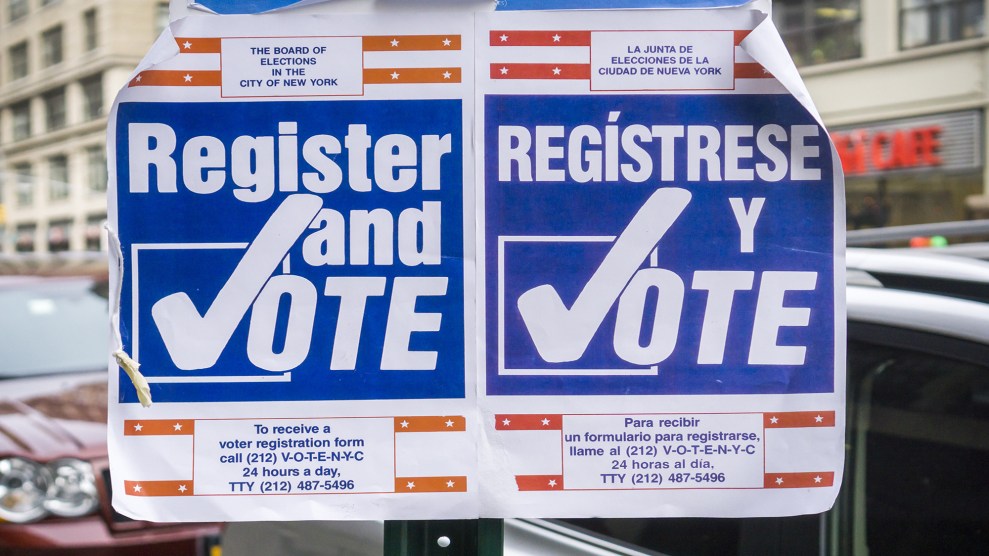 Oregon announced this week that since taking effect on January 1, its new automatic voter registration law has added 51,588 voters to the state’s rolls. More than half of the state’s new registered voters this year came through the automatic registration process.

Across the country in Vermont, Gov. Peter Shumlin signed a bill in April that will automatically register people to vote when they apply for driver’s licenses, unless they opt out. “While states across the country are making it harder for voters to get to the polls, Vermont is making it easier by moving forward with commonsense policies that remove unnecessary barriers and increase participation in our democracy,” Shumlin said in a statement when he signed the bill.

But Vermont, Oregon, California, and West Virginia are the only four states in the country that have adopted automatic voter registration. According to the Brennan Center for Justice, a civil rights advocacy group in favor of the system, 28 states and the District of Columbia have considered implementing automatic registration in 2016 but are stalled. President Barack Obama has endorsed the scheme, saying it should be the “new norm across America.” Hillary Clinton agrees. In 2015, Sen. Bernie Sanders proposed federal legislation to mandate automatic registration. A similar measure in the House of Representatives now has 86 co-sponsors.

One aim of automatic voter registration is to increase turnout in elections. Many eligible voters don’t cast ballots because of voter suppression, bungled election administration, or voter apathy. According to the Pew Research Center, the United States has among the lowest voter turnout rates of developed countries.

Proponents of automatic voter registration, usually Democrats, say the process could bring tens of millions of otherwise eligible voters onto state voter rolls. California alone estimated 6.6 million of its citizens were eligible but not registered when state officials passed its bill in September 2015. But conservatives generally oppose these plans, arguing state voter rolls will be flooded with people who aren’t eligible to vote and others who don’t want to be registered. Moreover, the National Voter Registration Act of 1993 (commonly known as the “Motor Voter Act”) already requires state agencies that interact with residents, such as departments of motor vehicles, to offer them the opportunity to register to vote.

“Requiring automatic registration from government databases risks the integrity of the election process and improperly shifts the responsibility for registering from the individual to the government,” wrote Hans von Spakovsky, a senior fellow at the Heritage Foundation and former commissioner on the Federal Elections Commission, in 2013. He cited 2008 US Census data suggesting the biggest reason people don’t register to vote is that they don’t want to register. For those who were registered but didn’t vote that year, their four biggest reasons were that they were too busy (17.5 percent), experienced illness or disability (14.9 percent), were not interested (13.4 percent), or did not like the candidates or campaign issues (12.9 percent). Just 6 percent of those surveyed didn’t vote because of registration problems.

One reason why automatic voter registration might not be more widespread, opponents argue, is that it tends to benefit Democrats more than Republicans. A Washington Post article last fall looked at California, where many of the eligible but non-registered citizens were younger and African American or Hispanic, groups that tend to vote Democratic. In Oregon, the latest state data suggests that’s true as well, but Oregon Secretary of State Jeanne P. Atkins told Mother Jones that the data falls in line with the state’s party registration figures overall.

It’s unclear if automatic voter registration will actually lead to more ballots being cast. Although an estimated 50 million people could be added to the voter rolls across the country, according to the Brennan Center, tens of millions of already eligible and registered voters don’t go to the polls at all. The Bipartisan Policy Center reports that overall voter turnout declined from 131 million in 2008 to 126 million in 2012, despite an increase of more than 8 million eligible voters. “Some 93 million eligible citizens did not vote,” the group reported.

Another concern is that automatic registration could open the doors for noncitizens to vote, because noncitizens can sometimes receive driver’s licenses and other government identification materials. Andrew Napolitano, a conservative former judge and Fox News contributor, said a likely effect of California’s new law was that “the state is going to provide shelter for illegals to vote.” But most states separate the voting rolls from state agency information on citizenship verification, according to a Brennan Center report last year.

Atkins, the Oregon secretary of state, said she’s confident voters won’t be improperly registered in Oregon, because the DMV can “sort between an immigration document…and a citizenship document.” Only information from eligible voters is forwarded to election officials and added to the voter rolls, she said.

“To be invited into the process the way we’re doing here…is really going to make some difference,” Atkins said. “Hopefully we can send a message that we welcome people participating, we want them to, and get them a little more engaged in the process.”