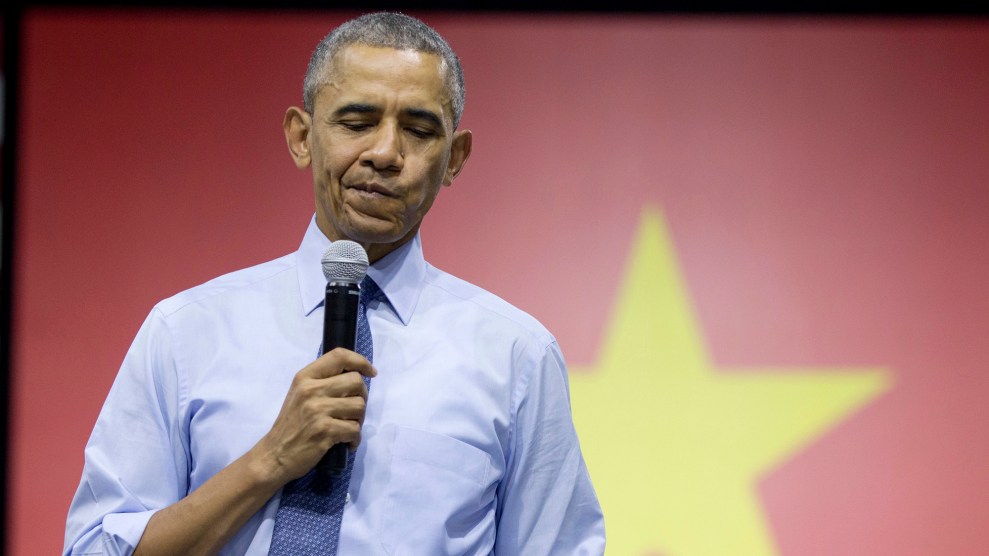 It’s the job of the Department of Justice to defend the laws of the United States to the best of its ability. But earlier this month, that job led the Obama administration’s top lawyers to take an awkward, even embarrassing position: embracing a racist, century-old precedent in order to deny birthright citizenship to people from the territory of American Samoa.

American Samoans are the only people born on US soil who are denied birthright citizenship. Five people from the island territory are suing the federal government, arguing that this deprivation violates the 14th Amendment’s guarantee of birthright citizenship to “[a]ll persons born or naturalized in the United States, and subject to the jurisdiction thereof.” Last year, the DC Circuit Court of Appeals ruled against the American Samoans. The plaintiffs are now appealing to the Supreme Court.

On the opposite side is the Obama administration, which urged the Supreme Court not to take the case in a brief earlier this month. In doing so, the government offered a full-throated endorsement of a set of Supreme Court rulings known as the Insular Cases, which are notorious today for espousing antiquated ideas about colonialism and white supremacy.

The Insular Cases date back to the early 1900s, when the United States had recently snapped up new territories such as Puerto Rico, Guam, and the Philippines, but did not want to incorporate the people who lived in these territories into American society. The justices who authored the Insular Cases were not subtle in their views of these residents, describing them as “savage” “alien races.” In one case, Justice Edward White hypothesized that granting citizenship to an “uncivilized race” in a new territory would “inflict grave detriment on the United States” through “the immediate bestowal of citizenship on those absolutely unfit to receive it.”

The justices who authored the Insular Cases were not subtle in their views of these residents, describing them as “savage” “alien races.”

Through the Insular Cases, the Supreme Court created a legal framework for the United States to become a colonial power without extending complete constitutional rights to its new subjects. The Constitution applied fully in what the court deemed “incorporated territories,” such as Arizona, which were settled mostly by white people and destined for statehood, but much of the Constitution did not apply in “unincorporated territories,” such as American Samoa, which were not considered to be on a path toward statehood—largely because of their racial and ethnic makeup. Between 1917 and 1986, Congress passed measures to confer citizenship on the residents of each of the other four American insular territories, but never American Samoa.

“I wouldn’t have thought that this administration would be in a hurry to champion expansive views of old precedents that are controversial on race and ethnicity grounds,” says Stephen Vladeck, a constitutional law expert at the American University Washington College of Law.

For Vladeck, along with some of the nation’s top lawyers who have filed amicus briefs on behalf of the plaintiffs, the American Samoans’ case is interesting not just because of the birthright citizenship issue but also because it functions as a referendum on these infamous outdated decisions. The Insular Cases addressed whether various aspects of the Constitution, particularly economic issues involving taxation and tariffs, applied in the new territories. But the cases never directly addressed citizenship. The five American Samoans have argued that for this reason, the Insular Cases are not actually at issue in their case, which should instead turn on whether the citizenship clause was intended to apply to US territories.

But the DC Circuit explicitly applied the precedent of the Insular Cases to the citizenship clause, finding the cases “both applicable and of pragmatic use in assessing the applicability of rights to unincorporated territories.” The government’s brief to the Supreme Court also relies heavily on an expansive view of the Insular Cases, particularly the 1901 case Downes v. Bidwell, in which the court found that a tax provision of the Constitution did not apply to Puerto Rico. “The Court held that Puerto Rico is not part of ‘the United States’ for purposes of that provision,” the brief argues, nor is American Samoa “in the United States” for the purposes of the citizenship clause. The government quotes extensively from Downes, in which Justice Henry Brown (who also authored Plessy v. Ferguson, the infamous decision that gave the Constitution’s blessing to segregation) went out of his way to posit that “the Constitution should not be read to automatically confer citizenship on inhabitants of U.S. territories,” even though citizenship was not at issue in that case.

If the Supreme Court declines to review this case and allows the DC Circuit’s expansive view of the Insular Cases to stand, Vladeck believes “it will make it that much harder for residents of all the US territories to argue that some of their most fundamental rights are protected by the Constitution going forward, as opposed to by acts of Congress currently on the books that could be repealed in the future.”

This is the same argument made by the lawyers working on behalf of the five plaintiffs. “Failure to grant review would place at risk the citizenship status and constitutional rights of more than 4 million Americans who live in U.S. territories,” Neil Weare, a civil rights attorney who spearheaded the case and argued it before the DC Circuit, said in a statement this week.

“The question in this case is: Just what rights do territorial citizens have?” says Vladeck. “For those who think territorial citizens ought not to be second-class subjects, I think it’s worth having the conversation not about birthright citizenship as such but about the continuing prevalence of the Insular Cases.”

The renewed salience of the Insular Cases has brought this case to the attention of the nation’s top Supreme Court litigators. Prominent legal scholars, civil rights groups, and former judges have filed amicus briefs to urge the Supreme Court to reverse the expansive view of the cases set forth by the court of appeals. (Some legal scholars argue that the cases should be overturned because they are based on racial bias.) After the five plaintiffs lost at the DC Circuit, superstar conservative lawyer Ted Olson stepped in to represent them in their appeal to the Supreme Court. On the other side, conservative legal scholar John Eastman—who, like Donald Trump, does not believe the 14th Amendment affords birthright citizenship to the children of undocumented immigrants born in the United States—filed a brief supporting the Obama administration.

In his response to the government’s brief, filed on Monday, Olson and his colleagues cite the government’s expansive view of the Insular Cases as a reason that the Supreme Court should take up their case. “That the Solicitor General is forced to defend a statute based on opinions blessing overt discrimination against persons branded as ‘alien races’…is a red flag that review is warranted,” the response states. The justices could consider taking the case as early as their June 9 conference.

Despite the enthusiasm of the elite legal community, Vladeck believes the court is unlikely to take up the case. With the late Justice Antonin Scalia’s seat still unfilled, the eight-member court is less likely to take up new cases, and there is no disagreement among the lower courts to resolve. The justices also just might not see questions in this case as pressing compared with the other issues that come before the court. “It’s a long shot for the court, and I think that’s too bad,” Vladeck said. “The Supreme Court has not seriously considered the scope of constitutional rights in the territories for decades.”