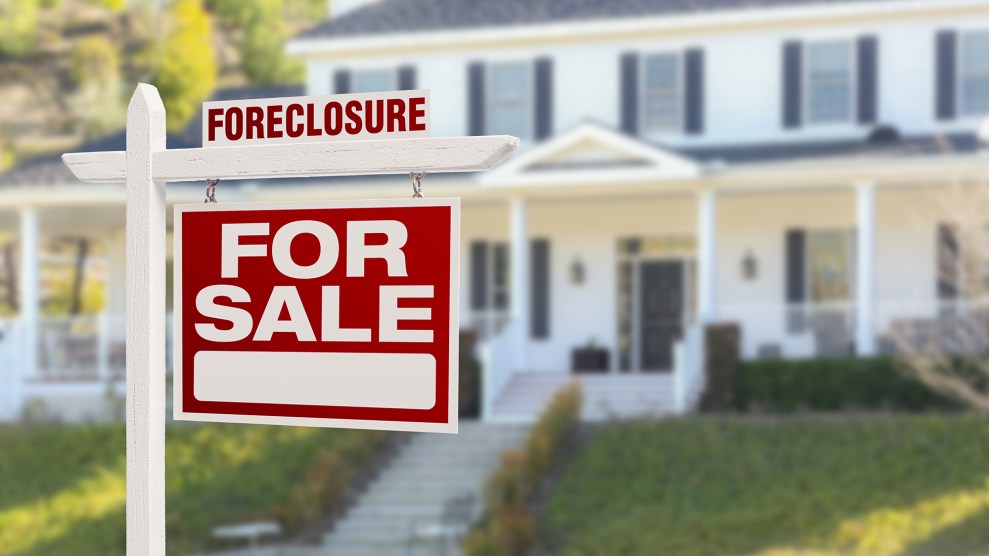 Trump University, the former for-profit business education venture that has landed Donald Trump in various courts to defend himself against claims of fraud, promised to teach students the secrets of Trump’s financial success. One particular course offered by Trump U presented a particularly blunt strategy for making money: target destitute, “completely disabled” homeowners headed into foreclosure and convince them to sell their homes at a discounted price. That is, exploit disabled people for profit.

That advice comes near the end of a nearly three-hour audio lesson—paired with a workbook—that was offered by Trump University in 2006, shortly before the housing market collapsed. It was a year after the opening of Trump University, which shut down in 2010 and has prompted lawsuits against Trump from former students who allege that the school was a scam that ripped them off.

The 2006 course, titled “Real Estate Goldmine: How to Get Rich Investing in Pre-Foreclosures,” begins with a monologue by Trump, who says, “We’re not peddling get-rich-quick schemes, no blue-sky promises or an easy road to riches.” But he pledges that his course will offer a “real estate gold mine.” Then Trump University’s Jon Ward interviews real estate investment adviser Gary Eldred about the best strategies for taking advantage of homeowners facing foreclosures. Throughout the course, Eldred provides a variety of tips on spotting homes that are in pre-foreclosure—for instance, look for an owner delinquent on payments because he could be foreclosed on imminently—and he offers strategies for persuading owners to sell their homes at a discount when they’re facing foreclosure. He repeatedly notes that a buyer should be kind when approaching pre-foreclosure owners about purchasing their properties, because these potential sellers are going through a stressful time.

But Eldred does cover how to take advantage of short sales—a deal in which a buyer talks the homeowner into selling and convinces the mortgage lender to reduce the seller’s debt. Eldred points out that a key aspect of such a transaction is convincing a lender that the owner won’t be able to pay back the loan as it stands. The goal, Eldred says, is to find homeowners who are in a truly desperate financial position.

“Under no circumstance will a lender accept a short sale if they think they can squeeze that borrower for an extra nickel, so certified destitution evidence needs to be included,” he explains. He lists the conditions that are ideal for a short sale: “The borrower is out of work, the borrower has $50,000 in unpaid medical claims, the borrow is completely disabled, the borrower has an extraordinarily messy divorce where everything has been squandered.”

During the 2016 presidential campaign, Trump has been criticized for mocking a New York Times reporter with a disability. Clips of that incident have become fodder for an attack ad created and aired by an outside group supporting Hillary Clinton.

During the course, Eldred laments several times that foreclosures are a painful but inevitable part of the economy. Trump makes a similar point in his introduction. “The sad fact is, more and more property owners are getting themselves in trouble!” Trump says. “Defaulting on mortgages and losing their homes or commercial properties. I’m sorry for them, but life goes on, and the fact is, one person’s misfortune is someone else’s opportunity. That’s just the way the world works. This program shows you how to make a lot of money from investing in pre-foreclosures.”