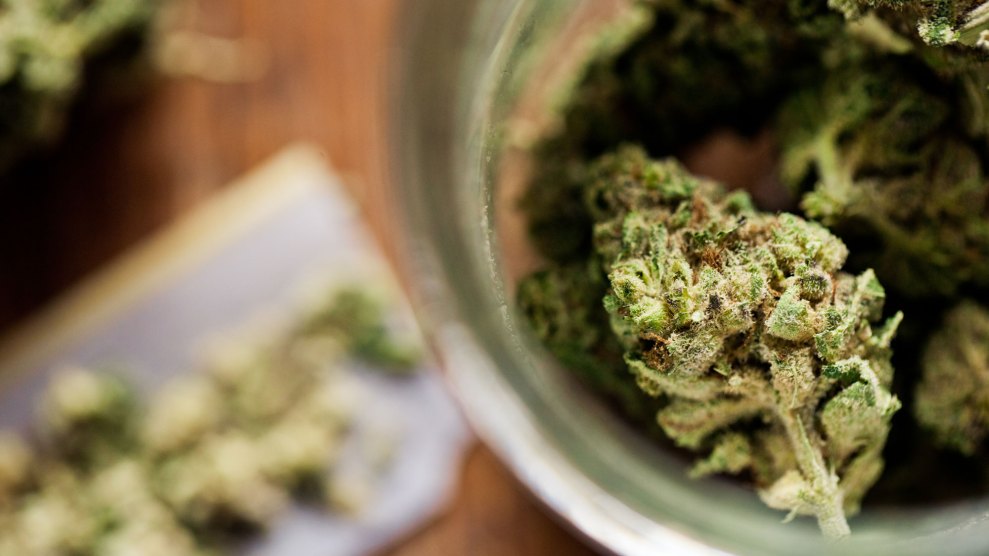 With Donald Trump and Hillary Clinton both viewed unfavorably by the majority of Americans, Democrats are hoping that if the top of the ballot doesn’t excite voters this November, maybe the bottom will. Marijuana liberalization and minimum-wage hikes will get a vote in a handful of swing states for the presidential candidates. But there’s reason to think these issues might not galvanize voters the way they once did.

Marijuana is on the ballot in nine states this year—five voting on legalization and four voting on medical marijuana—and Democrats hope the measures will be a draw for liberal voters. The conventional wisdom, says Josh Altic of the nonpartisan political reference site Ballotpedia, is that marijuana measures attract a lot of young voters who support legalization but wouldn’t otherwise vote, and that these voters overwhelmingly support Democrats.

In 2012, exit polls in Colorado showed the state defied the typical gender gap, with men more likely than women to vote for Obama. Pollster Ann Selzer of the Iowa-based firm Selzer & Co. speculates that the legalization vote drew more young men to the polls and helps explain this unusual gender breakdown.

But as support for legal marijuana grows, the vote-yes camp is becoming more diverse.

“A random person who said, ‘Yeah, I’m going to vote for marijuana legalization,’ I would no longer assume they were going to vote Democrat.”

“A random person who said, ‘Yeah, I’m going to vote for marijuana legalization,’ I would no longer assume they were going to vote Democrat,” says Altic.

“We’re seeing Democrats, Republicans, Libertarians, even people from the Green Party be a part of this,” says Carlos Alfaro, the Arizona political director for the Marijuana Policy Project, which backs a marijuana legalization measure in the state. “The Democrats see this as a good way to get voters out there, but I don’t think it’s in any way a partisan issue, just based on the amount of responses we’ve gotten.”

Alfaro, a Republican, says many people in the legalization campaign are conservatives and that the state has a real “libertarian streak.”

In Florida, Pollara’s internal polling shows 77 percent support for the legalization initiative. “You simply do not get numbers like that without having broad support among, basically, every age, demographic, geographic, racial, ethnic group,” he says.

Even as the effect of marijuana initiatives on presidential voting grows murkier, Altic expects votes on the minimum wage and gun-related initiatives to remain more partisan.

Colorado is among four states with minimum-wage hikes on the ballot this year. (An Arizona measure may qualify for the November ballot as well.) Those initiatives are likely to benefit Democrats, says Geoffrey Skelley, a spokesman for the University of Virginia Center for Politics. The 2014 midterm elections had historically low turnout, but in Nebraska, Arkansas, and Alaska, where minimum-wage hikes passed, turnout was up from 2010.

“When we looked at voters in Latino and African American communities, the support [for a higher minimum wage] is just outrageous,” says Patty Kupfer of Colorado Families for a Fair Wage. “The level of enthusiasm, of knowing this is on the ballot—will this make you more likely to vote?—are very strong as well.”

Gun-related initiatives could have a similar effect for Republicans, says Skelley. Nevada and Maine will vote on background-check proposals; Washington will consider a measure to allow courts to prevent potentially dangerous people from getting firearms; and California will vote on prohibiting large-capacity magazines.

But the poll numbers don’t look promising for opponents of gun control in Nevada or Maine. Recent polls in both states show more than 60 percent support for the background-check measures. In swing state Nevada, given the presidential election and the Senate race to replace retiring Minority Leader Harry Reid, “it’s difficult to get people to stay focused on the initiatives,” says Robert Uithoven of NRA Nevadans for Freedom.

There are several other swing-state measures that could bring out voters, including a universal health care initiative in Colorado and an anti-union proposal in Virginia. But experts say it’s important not to overstate the influence of any of these measures.

“This stuff is very much on the margins, and it might help a little bit, but the presidential race is the main driver of turnout,” says Skelley. “It’s tough to say that these things are going to make much of a difference in the end. But I guess it can’t hurt to try.”