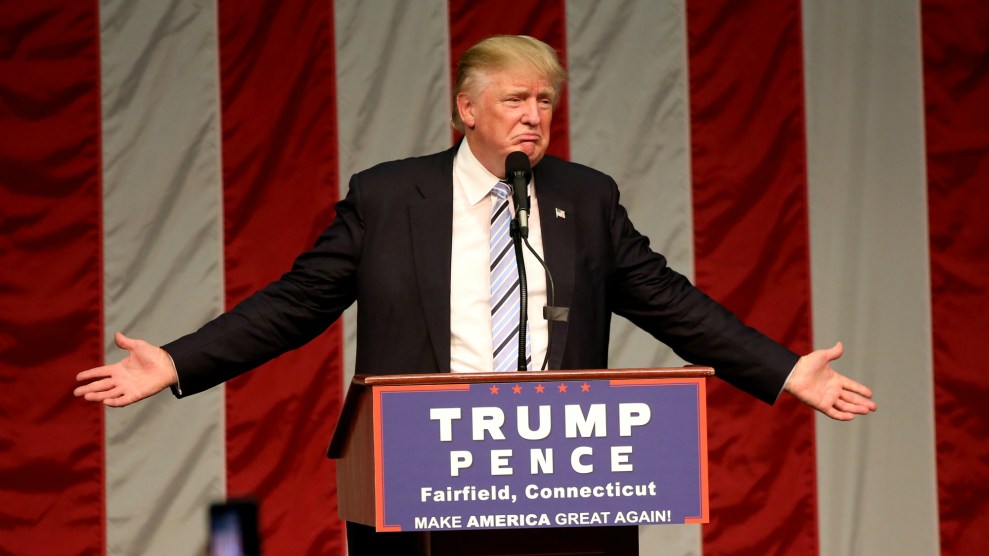 With Donald Trump struggling mightily among minority voters, the Republican National Committee is redoubling its own efforts to halt the party’s slide among voters of color. But on Tuesday night, Trump will participate in a Fox News town hall in Milwaukee, a city that has been rocked by unrest following the fatal shooting of a 23-year-old black man by a police officer on Saturday—a reminder to the party apparatus that there’s only so much it can do to control his message on issues of race.

Trump is expected to speak about the shooting of Sylville Smith during the town hall, which was scheduled before the shooting and will air at 10 p.m. Eastern on Fox News. Given his previous statements on the importance of “law and order,” it is likely that the Republican nominee will reaffirm his support of police officers during tonight’s event.

Trump’s presence in the racially divided city comes as the Republican National Committee works to improve its standing among minorities. On Tuesday, the RNC announced the launch of a weekly social-media campaign targeting Latino voters. According to a statement released by the committee, the campaign, which will feature content in English and Spanish, “will speak about job creation, the economy, national security, veteran support, education, taxes, and immigration.” The new outreach initiative will also include a video series called GOP Hispanics: The Week Ahead, which will make the case that the Republican Party is the best choice for Latino voters.

The RNC’s new Hispanic outreach efforts were launched one week after the Washington Post and the Associated Press reported that the committee had expanded its strategic-initiatives team to bolster its black outreach operations. Ashley Bell, the founder of a bipartisan group of black leaders and community activists called 20/20 Leaders of America and one of 18 black delegates at July’s Republican National Convention, will serve as the national director of African American political engagement for the RNC. Shannon Reeves, a professor of political science at Alabama A&M University, will serve as a senior adviser to the RNC’s political department, analyzing data to help the RNC identify black voters. Elroy Sailor, a former senior adviser to Rand Paul’s presidential campaign, will join the RNC as a senior adviser to the committee’s chair, Reince Priebus. In June, the RNC also appointed a Georgia State University senior to lead an effort to engage students at historically black colleges and universities.

The RNC’s reinvigorated minority outreach efforts follow the exodus of a number of minority staffers. In April, the RNC’s director of African American initiatives departed, and three other black outreach staffers have left the committee in the past year. The RNC’s director of Hispanic media relations left the committee in June after she was reportedly “uncomfortable” working with the Trump campaign.

The Trump campaign has also attempted to expand its minority outreach. Earlier this month, the campaign officially launched its black outreach efforts when it held a “Day of Endorsement” event at a black church in North Carolina. But the campaign has been inconsistent in its outreach, declining several invitations from civil rights and minority-led groups looking to speak with the candidate. Trump has promised that he will be the “law and order” candidate, and he met with the Fraternal Order of Police on the same day he was invited to speak to a group of black and Hispanic journalists.