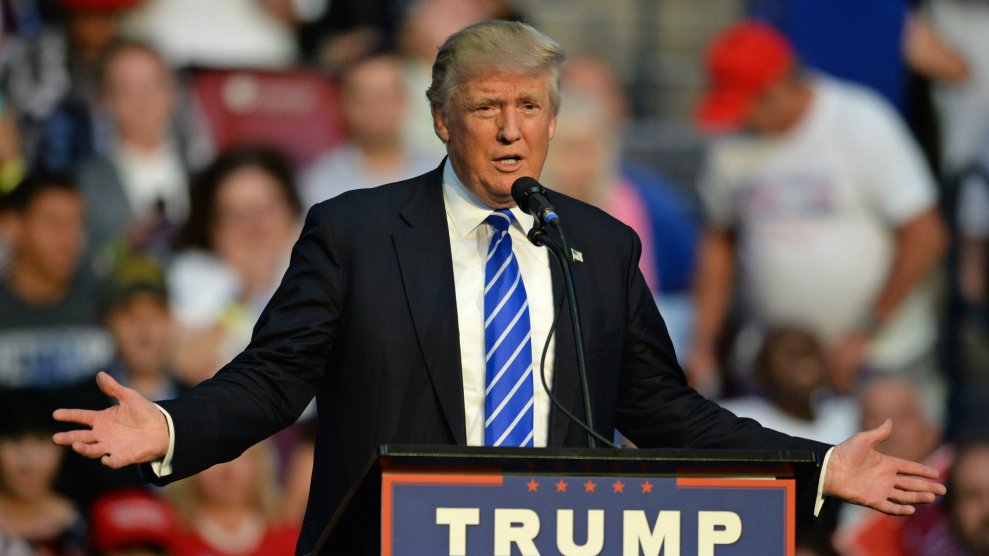 Last week, Donald Trump repeatedly asserted that President Barack Obama was the “founder” of ISIS and blasted Hillary Clinton as a “co-founder” of the terror group that has taken over large swaths of Iraq and Syria. But Obama was not in the White House and Clinton was not secretary of state when ISIS originated.

When a conservative radio host on Thursday asked if Trump meant that the Obama administration had “created the vacuum” in the region that allowed ISIS to grow, the GOP nominee stuck to his nonsensical statement: “No, I meant he’s the founder of ISIS.” Next, Trump claimed he was being sarcastic. Then at a campaign rally, he added, “But not that sarcastic.” It was a very Trumpian couple of days. And on Monday, with a speech on national security that Trump read off a teleprompter, he had a chance to declare what he really thought about Obama, Clinton, and ISIS. After repeating the lie that he had opposed the Iraq War before the invasion, Trump did not restate his “founder” claim, but he said that because of Obama and Clinton, “Iraq is in chaos, and ISIS is on the loose.” He added, “the Obama-Clinton foreign policy has unleashed ISIS.” He insisted that Obama’s withdrawal of US troops from Iraq (which actually was compelled by an agreement reached with the Iraqi government by President George W. Bush) “led directly to the rise of ISIS.”

Here’s the problem for Trump—if being wildly inconsistent and attacking an opponent for supposedly holding a position that Trump himself once advocated is a problem: 10 years ago, Trump called for a complete US withdrawal of troops from Iraq and indicated that he didn’t give a damn if this led to civil war and greater violence there. He even predicted that such a move would cause the rise of “vicious” forces in Iraq. But Trump believed this would not be the United States’ problem. That is, Trump was ardently in favor of the very actions that he now decries and for which he wrongfully blames Obama and Clinton.

In a 2006 CNBC interview, Trump was asked to critique Bush’s performance in the White House. Trump immediately brought up the Iraq War:

Trump was passionate and insistent. Bush had to get the hell out of Iraq right away:

Trump fancied the do-it-fast approach. And he noted that a US withdrawal should proceed, even though it would precipitate more violence in the region and the worst and most violent forces would benefit. It’s almost as if Trump foresaw the rise of ISIS—but didn’t believe that this mattered for the United States:

I would announce that we have been victorious in Iraq and all the troops are coming home and let those people have their civil war. And, by the way, no matter if we stay or if we leave, the most vicious person that you’ve ever seen in your—. Saddam Hussein is going to be like a nice guy compared to the one who’s taking over Iraq. Somebody will take over Iraq, whether we’re there or not, but probably when we leave, will take over Iraq. He will make Saddam Hussein…He will make Saddam Hussein look like a baby.

In his characteristic manner, Trump did not mince his words and he reiterated his solution:

I just said, announce victory, get them home…Let’s say, “Victory, Tremendous.” Have a big thing in the streets. Then get out real fast before you get shot. Let’s get home…Hey, hate us over there. Now how, how, do you—. The people that like us hate us. Those are the good ones. Then you have the double hate where they wanna just shoot us. But how do you solve that problem? You got to get out of Iraq.

Trump was clear at the time: The United States had to remove its troops, even if that would cause a civil war and a dramatic expansion of violence and terror in Iraq and the region. Now he denounces Obama and Clinton, who were not in charge of US foreign policy at that time, for supposedly implementing the policy he demanded. By Trump’s own standards—sarcastic or not—he is at least an honorary founder of ISIS.

Watch Trump take the exact position he now slams as “naive” and an example of “bad judgment”: