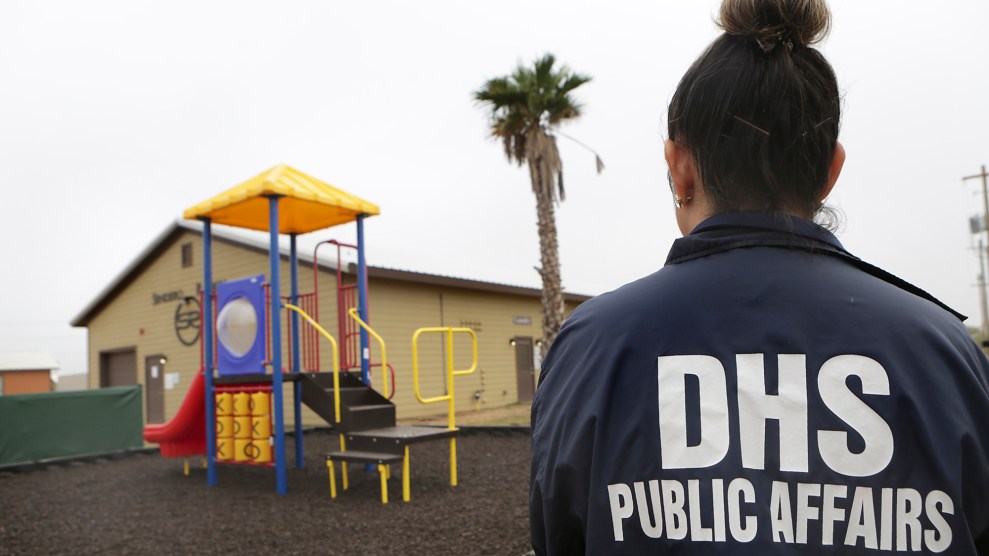 The Department of Homeland Security has renewed a much-criticized contract with the Corrections Corporation of America, one of the country’s biggest prison companies, to continue running a family immigrant detention center in Texas.

The decision comes months after the Justice Department announced it would stop contracting with private prison companies because of concerns over the security and safety of their facilities. In August, DHS’s Immigration and Customs Enforcement agency (ICE) said it would also review its contracts with private prison operators.

The renewed contract at the South Texas Family Residential Center in Dilley, Texas, which holds a majority of the country’s immigrant mother and child detainees, will run through 2021, the Tennessean reports. The Nashville-based Corrections Corporation of America, which announced the deal on Monday, has agreed to reduce costs at the 2,400-bed facility by 40 percent, mostly through reductions in staff.

That could be bad news for immigrants who have complained in the past of an understaffed medical clinic and widespread illness among child detainees. Mothers at the Dilley facility have said it’s not right to hold them and their kids in prison-like conditions, especially after they escaped gang violence and other trauma in their home countries. Understaffing at another CCA-run prison, in Louisiana, coincided with high rates of assault, a Mother Jones investigation found.

The South Texas Family Residential Center opened in 2014 as the Obama administration was attempting to deal with a surge of Central American families at the border. DHS struck an unusual deal with CCA to run the facility, according to an August Washington Post investigation, which found that the department had skipped the standard bidding process and agreed to pay CCA the same rate regardless of how many beds were actually occupied in the facility.

“It’s costly to taxpayers and achieves almost nothing, other than trauma to already traumatized individuals.”

That’s been lucrative for CCA, which earned 14 percent of its total 2015 revenue from the South Texas Family Residential Center, but highly criticized by immigrant rights activists. “For the most part, what I see is a very expensive incarceration scheme,” Rep. Zoe Lofgren (D-Calif.) told the Post. “It’s costly to taxpayers and achieves almost nothing, other than trauma to already traumatized individuals.”

DHS immigration officials are currently reviewing contracts with seven other CCA-run detention facilities across the country. “We think…they’ll come to the same conclusion that we’ve been a really, really good tool for ICE,” CEO Damon Hininger said in a conference call on Tuesday, referring to the DHS agency. He added that it would be expensive for the government to end its contracts with CCA. “Building, staffing and operating new facilities to replace all the capacity currently provided by the private sector would cost ICE billions of dollars and result in costly long-term obligations.”

CCA shares climbed on Monday after the company announced the renewed contract in Texas. The announcement “removed some uncertainty” about CCA’s relationship with the Obama administration, financial analysts noted. Stocks for private prison companies, including CCA, had been falling for months after the Justice Department announced it would end their use.

For more on CCA, check out MoJo senior reporter Shane Bauer’s report about his four months as a prison guard for the company.