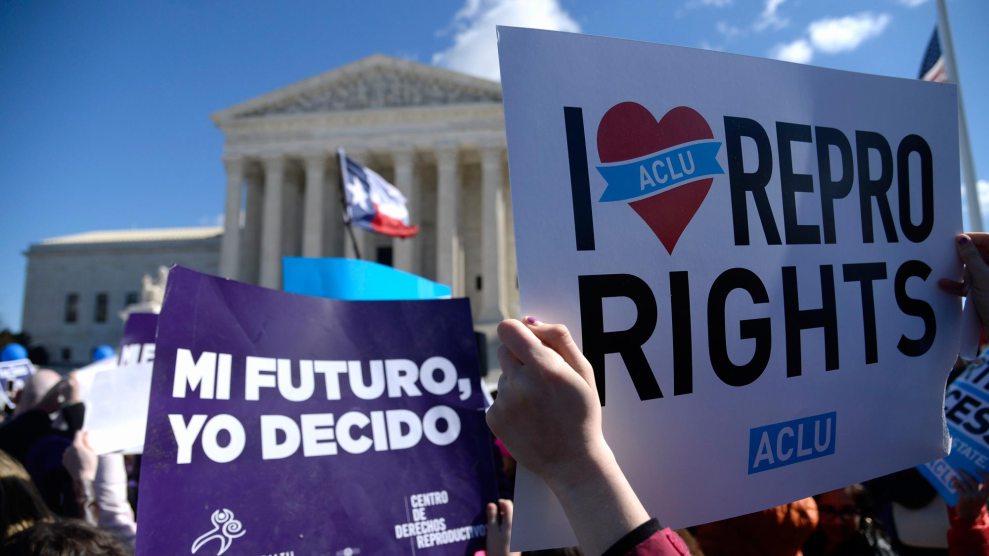 At a time of rising concern among abortion rights advocates about the future of abortion access under Donald Trump’s administration—the president-elect has vowed to appoint anti-abortion Supreme Court justices open to overturning Roe v. Wade—reproductive rights advocates on Wednesday filed three new lawsuits contesting state-level abortion restrictions. The American Civil Liberties Union (ACLU), Planned Parenthood Federation of America (PPFA), and the Center for Reproductive Rights (CRR) challenged a 20-week abortion ban in North Carolina, and restrictions on abortion clinics in Alaska and Missouri that they say are “medically unnecessary” and further limit access in states where it’s already tough to safely get the procedure.

“We are a nation of laws, and the Center is prepared to use the full force of the law to ensure women’s fundamental rights are protected and respected,” said Nancy Northup, president and CEO of CRR, in a press release.

In its decision last June in Whole Woman’s Health v. Hellerstedt, the Supreme Court struck down two Texas abortion restrictions as unconstitutional, and the case filed Wednesday in Missouri challenges very similar measures. One is a requirement that doctors providing abortions have admitting privileges at a local hospital, and the other requires that abortions be performed in ambulatory surgical centers (ASCs), outpatient facilities with strict and expensive infrastructure requirements that many medical professionals agree aren’t necessary to ensure the safety of abortions. As clinics in the state have been unable to meet all these restrictions, many have closed, leaving only one facility still providing abortions in Missouri.

The Alaska case challenges a 40-year-old restriction that makes it virtually impossible for outpatient health centers to provide abortions after the first trimester, in effect forcing women to travel out of state if they need a second-trimester abortion. The rules require facilities performing second-trimester abortions to fulfill onerous medical requirements—being equipped and staffed for a “major” surgery, for instance—that are similar to the ASC requirement struck down in Whole Woman’s Health.

Since 1973, North Carolina has banned abortion after 20 weeks of pregnancy. In January 2016, this ban was amended to include a narrow exception for immediate medical emergencies. The ACLU, CRR, and PPFA are representing a group of North Carolina medical providers who say this exception forces physicians to forgo their obligation to give the best care, by requiring them to delay necessary medical treatment until a woman’s situation is dire.

“It puts doctors in the position of having to wait until an abortion is immediately necessary in order to treat their patients,” said Genevieve Scott of CRR on a call Wednesday with reporters.

On the same call, Julie Rickleman, the interim vice president of CRR, explained that even though 20-week abortion bans weren’t directly addressed in Whole Woman’s Health, the Supreme Court’s ruling is still “legally helpful” in the North Carolina case, because it set a higher bar for states to prove that an abortion restriction actually benefits women’s health.

Dr. Raegan McDonald-Mosley, the chief medical officer of PPFA, called Trump and his administration “the biggest threat we have seen” when it comes to abortion rights.

“We don’t know exactly what’s going to happen and when. What is certain is we’ve been around for 100 years and plan to be around for 100 more,” McDonald-Mosley said of the continued threats to defund Planned Parenthood.

Jennifer Dalven, director of the ACLU’s Reproductive Freedom Project, wrote in a press release announcing the lawsuits: “With the cases we are filing today, we are sending a clear message that we won’t stop working until every woman can get the care she needs no matter who she is, where she lives, or how much money she makes.”