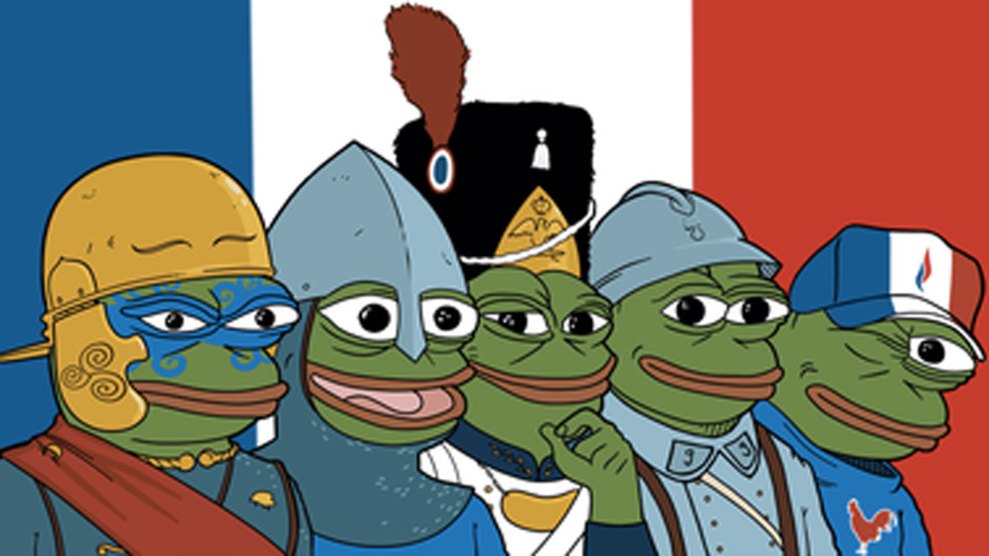 A meme posted by trolls campaigning for Marine Le Pen

Vladimir Putin isn’t the only one trying to attack the French presidential election. Far-right trolls and meme warriors like the kind who helped elect Donald Trump have found a new calling: “The Battle of France.” There’s no way of telling what real-world impact it’s having, but with the vote just a few days away, activity in support of right-wing candidate Marine Le Pen has reached a fever pitch on Reddit, 4chan/pol/, and other online forums popular with the American alt-right.

“All shitposting units are required to man their battle stations,” declared a recent 4chan post. “Meme war recruits: prove your worth. Veterans, lead the charge…MAKE FRANCE GREAT AGAIN.” The post urged 4channers to join a Discord forum dubbed “Operation: Marine Le Kek,” where at any given moment up to about 450 participants are conducting meme “raids” to hype their candidate and attack her centrist rival, Emmanuel Macron. Using fake French identities and sock puppet social-media accounts, they’ve hijacked Twitter hashtags, social-media posts, and comments sections on news sites with memes portraying Macron as a stooge of Jewish financiers who will sell out the working class and capitulate to Muslim terrorists.

Though “Operation: Marine Le Kek” is named after the ironic Pepe-inspired god of the alt-right, organizers of the forum have urged participants to mask their alt-right affiliations by avoiding the use of Pepe memes altogether:

On Twitter, the group has focused on hijacking popular hashtags and pushing pro-Le Pen hashtags in coordinated tweet-storms: 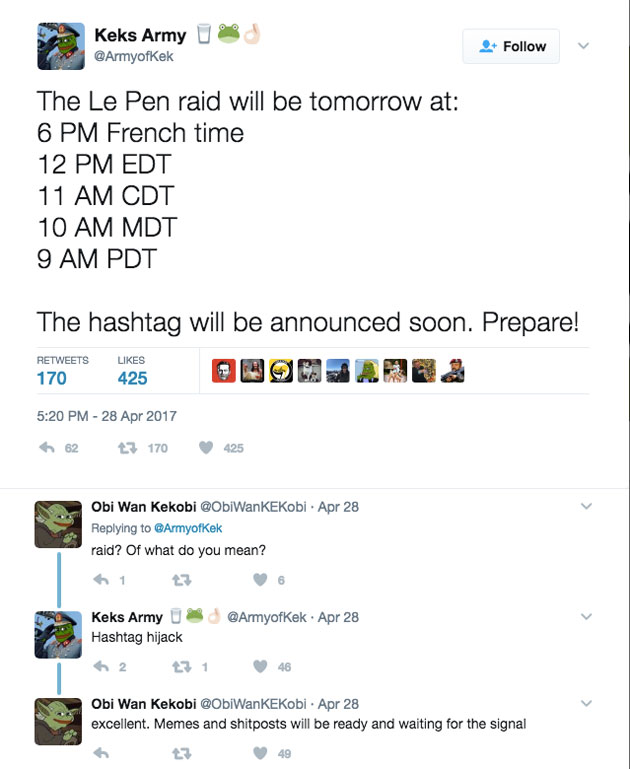 The group has pursued a different strategy on other social-media platforms. Here’s a how-to manual for Facebook trolling that was circulating last week (by then, Facebook had already banned 30,000 French accounts that violated its terms of service): 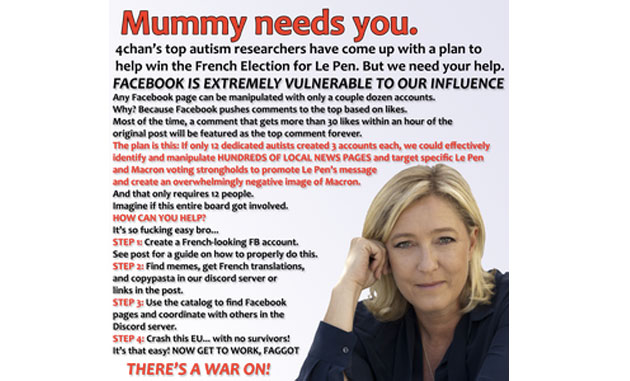 The meme warriors of 4chan have been careful to conceal their American identities. A number of posts on Discord urge users to adopt French-sounding social-media identities and avoid using Google Translate to convert English phrases into French. Instead, they’ve collaborated with the French equivalent of 4chan and a related French-language forum on Discord called La Taverne des Patriotes. English-speaking visitors to the French site hang out in a sub-forum known as #Foreign_Legion, where they often solicit help in translating their anti-Macron memes into French. 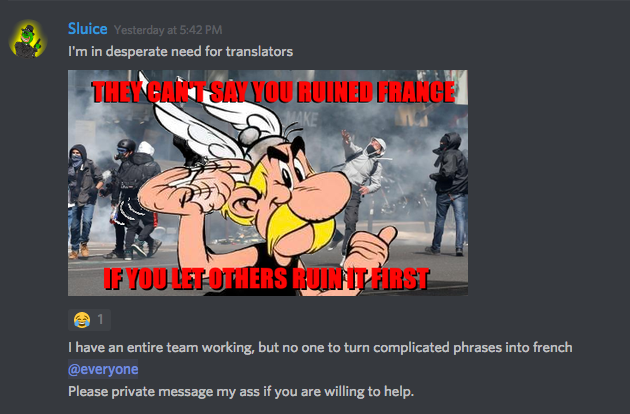 They’ve also been careful not to draw too much attention to their efforts:

The French- and English-language Discord groups include forums where meme creators share their work. Organizers have pushed a strategy focused on targeting specific ideological factions of the French electorate, as detailed in a recent 4chan thread:

1) “Portray Macron as a French aristocrat. Really hammer in the point that he doesn’t give a fuck about the common man, and that he is a [SIC] elitist who know [SIC] nothing about the common folk.” 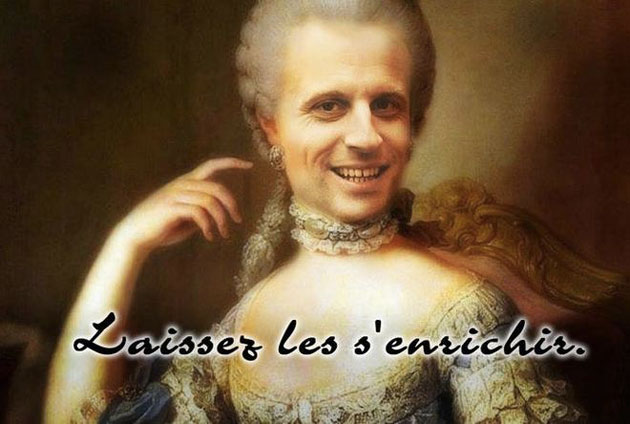 “Let them enrich themselves,” an anti-Macron meme posted on Discord

2) Make memes tailored to supporters of candidates who failed to reach the final round of the election: 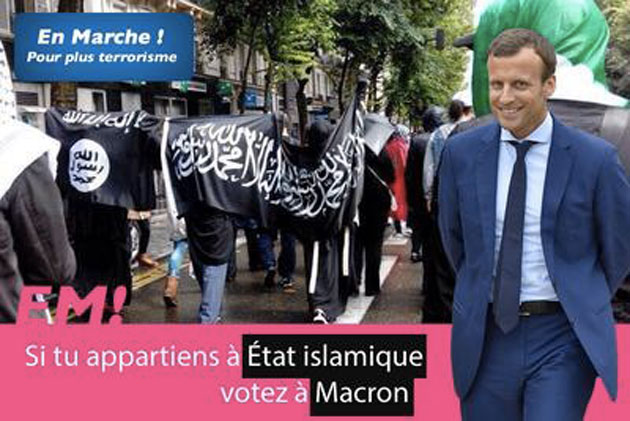 “If you are in the Islamic State, Vote Macron,” a meme posted on Discord 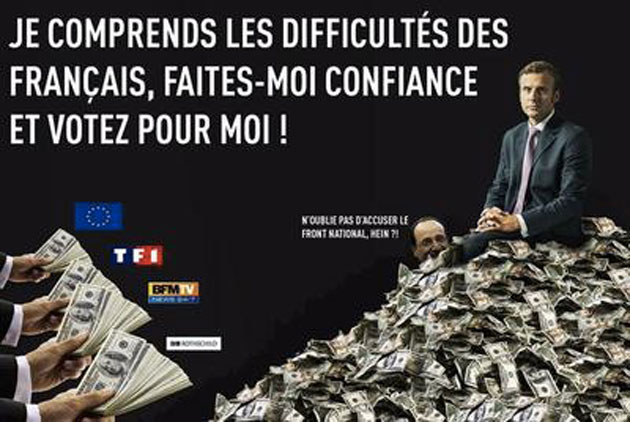 “Trust me, I understand the difficulties of the French. Vote for me!”

3) “MOST IMPORTANT: French voters hate [current president François] Hollande” and will vote against Macron if it means “another 5 years of Hollande.” 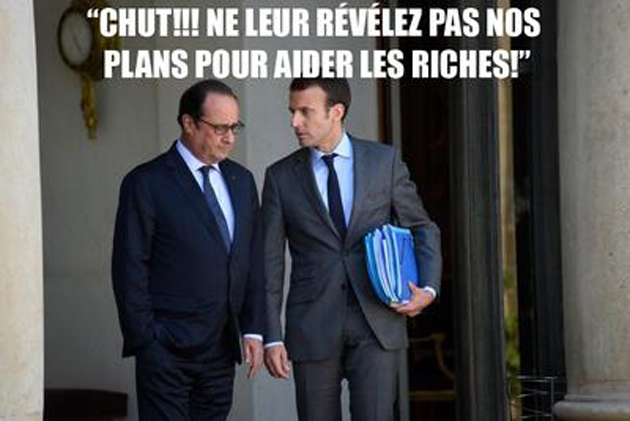 Macron to Hollande: “Shhh! Don’t reveal our plans to help the rich!”

Other memes have focused on the age difference between Macron and his older wife. Late last month, 4channers used doctored images to spread the conspiracy theory that he was secretly sleeping with his wife’s 30-year-old daughter.

Ultimately, it’s hard to assess the impact of these various efforts. The number of people participating in the the Discord chat rooms and 4chan threads I visited was relatively small—as of Tuesday there were less than 1,000—and they didn’t typically discuss specific targets. Participants have boasted of tweeting and retweeting pro-Le Pen hashtags tens of thousands of times, though it hasn’t typically been enough to cause them to trend on Twitter’s home page. What’s clear, however, is that anti-Macron and pro-Le Pen memes abound on French social media. On Tuesday, anti-Macron memes from the 4chan playbook dominated Twitter in association with a trending hashtag about France’s upcoming presidential debate: