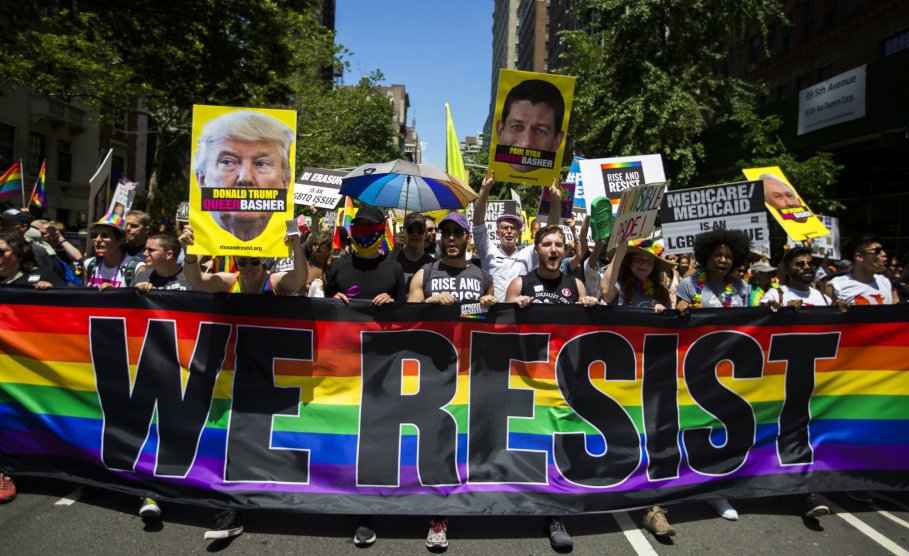 Pride Month is coming to a close, and this year’s events have taken a markedly different tone. In many cities, activists have been disrupting pride celebrations, raising concerns about police marching in the parades, corporate sponsors, and events not being inclusive of transgender communities and queer communities of color. These are recurring internal debates within LGBT communities, but this year they’ve intensified, in part because concerns about civil rights under the Trump administration have created additional urgency around these issues.

Here’s a look at some of those protests across the country.

Boston: Activists called for Boston Pride to include marginalized voices and, at one point, led the parade to call attention to the transgender women who have been killed this year by reading their names and holding up pictures of them. The main organizers of the action, an anti-oppression LGBT group called Stonewall Warriors, demanded Boston Pride disinvite police from the march and drop some corporate sponsors like Wells Fargo and Liberty Mutual.

Chicago: A group of roughly 40 activists stopped Chicago’s pride parade for about 15 minutes, protesting what organizers described as the “corporatization, whitewashing, gentrification, racism, and cisnormativity that have infused Pride for decades.” Led by the Trans Liberation Collective, activists called for a number of changes in society, including the “abolition of police and prisons,” and the allocation of more local resources toward trans people of color, free and affirming health care, and “access to affordable housing.”

Love this photo from the incredible @sarahdashji from today’s #TransUpFront action at Pride in Chicago. pic.twitter.com/TBmgmBTogj

Columbus, Ohio: Columbus was the scene of some of the most confrontational moments in pride events this year. Four protesters with Black & Queer Intersectional Columbus were arrested while attempting to block the parade route to protest the acquittal of the officer who shot Philando Castile and raise awareness about the violence against transgender people and queer people of color at pride festivals. Activists say they only wanted seven minutes of silence; video of the arrests taken by people attending the parade have raised concerns in the community about police using excessive force. A pride festival coordinator resigned, saying the group that put on the event had not responded appropriately, and 25 volunteers said they wouldn’t help put on the parade next year without meaningful change. The activists arrested have become known as the #BlackPride4, and about 100 people protested in support of the defendants outside a courthouse.

“Two white women cackling – one of them spit on me.” This is what happened when a black trans activist was arrested at an Ohio Pride parade. pic.twitter.com/qsGL9nt8tF

#columbuspride #PhilandoCastile COP ATTACKING PEACEFUL PROTESTORS. Share the fuck out of this. pic.twitter.com/yoDGGfU614

Minneapolis: Black Lives Matter protesters blocked the start of the pride parade route in Minneapolis, holding a banner that read “No KKKops at Pride! Make Pride Revolutionary Again.” The activists delayed the start of the march, saying police don’t have a place in pride and demanding justice for Philando Castile after the officer who shot him was acquitted.

Supporters of #BlackLivesMatter pause to take “moment of silence for victims of police violence. ” pic.twitter.com/lmOQBnjBJV

New York: Twelve protesters were arrested at New York City’s pride parade as they protested the police presence and corporate sponsors. Activists from various groups organized by Hood4Justice strategically stopped the nation’s largest LGBT pride parade in a symbolic act of defiance. The action took place right in front of the police contingent of the parade and outside the Stonewall Inn, the site of the a 1969 uprising against the police largely credited with sparking the LGBT rights movement.

Stonewall was a riot

Seattle: No Justice No Pride joined with Black Lives Matter protesters to stop the parade for a sit-in to honor Charleena Lyles, a mother of four who was shot and killed by Seattle police after she called to report a burglary. The action lasted 30 minutes to represent the 30 years of Lyles’ life and also took aim at some of Seattle Pride’s corporate sponsors.

Washington, DC: Capital Pride in Washington, DC, usually attracts tens of thousands of people to the parade. This year, activists protested the police marching in the parade, corporate sponsors, and a lack of diversity in pride leadership. They say pride isn’t inclusive of transgender communities and queer communities of color, disrupting the parade in three separate places and forcing the celebration to reroute.

Actions from No Justice No Pride in D.C. gained significant media attention and helped inspire some of the other protests around the country this year.