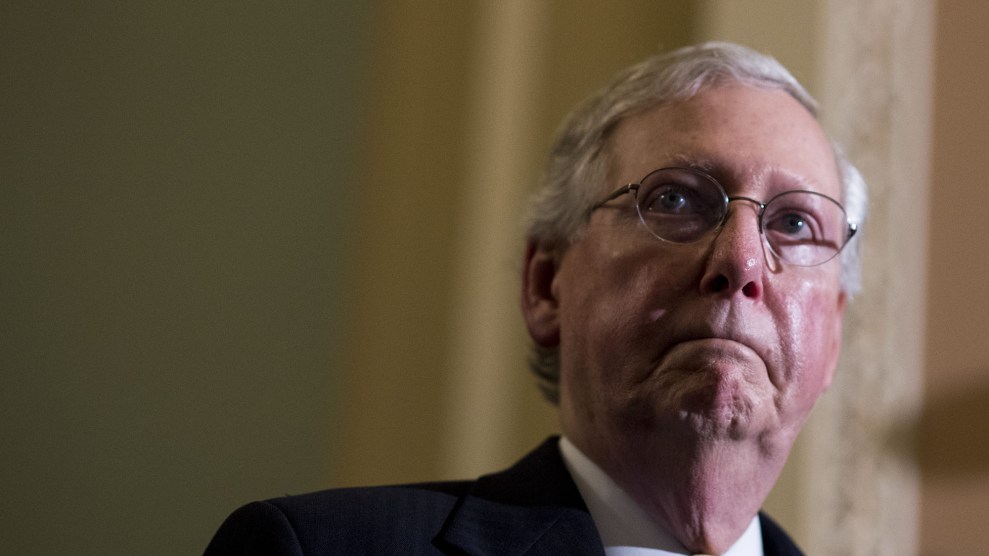 As Republicans continue to barrel toward a final vote Thursday or Friday on their plan to overturn Obamacare, the official Senate rules-keeper weighed in yet again Thursday to tell Republicans that parts of their plan violate the body’s rules. The Senate parliamentarian said that a policy to allow states to opt out of consumer protections such as essential health benefits could not be included in the final bill.

This ruling, along with others by the parliamentarian, suggests that the GOP won’t be able to use budget reconciliation—which allows the Senate to bypass its usual 60-vote threshold and move legislation with a simple majority—to defang Obamacare’s consumer protections for people with preexisting conditions, a main goal of conservatives in the Senate. It was only by stripping out these protections that the House was able to get a group of very conservative members on board and pass its version of the health bill.

“The parliamentarian’s latest decision reveals once again that Republicans have abused the reconciliation process in an attempt to radically change one-sixth of the American economy by repealing the Affordable Care Act,” Sen. Bernie Sanders (I-Vt.), the ranking member on the Budget Committee, said in a statement announcing the parliamentarian’s ruling.

Since they hold just 52 seats in the Senate, Republicans are trying to pass an Obamacare repeal using reconciliation. But reconciliation comes with restrictions, including that each part of the bill has to be relevant to the budget and that the overall package does not increase the deficit.

Republicans have run into trouble with that first part. The Senate parliamentarian has tossed out a number of provisions as irrelevant to the budget. In addition to the latest ruling on state innovation waivers, the parliamentarian has rejected a provision that would have increased the amount insurers can charge older consumers (which the AARP has branded an “age tax”), another provision that would defund Planned Parenthood for one year, and many others.

Senate Republicans have already voted down the full repeal-and-replace plan introduce by Senate Majority Leader Mitch McConnell (R-Ky.). Now McConnell has turned to a fallback option known as a “skinny repeal.” (“Skinny” is a bit of a misnomer, since the measure would likely still cause more than 15 million fewer people to have insurance). It’s unclear if that skinny bill is the final product that Republicans hope will one day be signed by President Donald Trump, or if it’s just a tool to start discussions with the House to carve out a final compromise. But whatever final bill the Senate clears will need to get the parliamentarian’s approval if Republicans want to pass it without Democratic support.