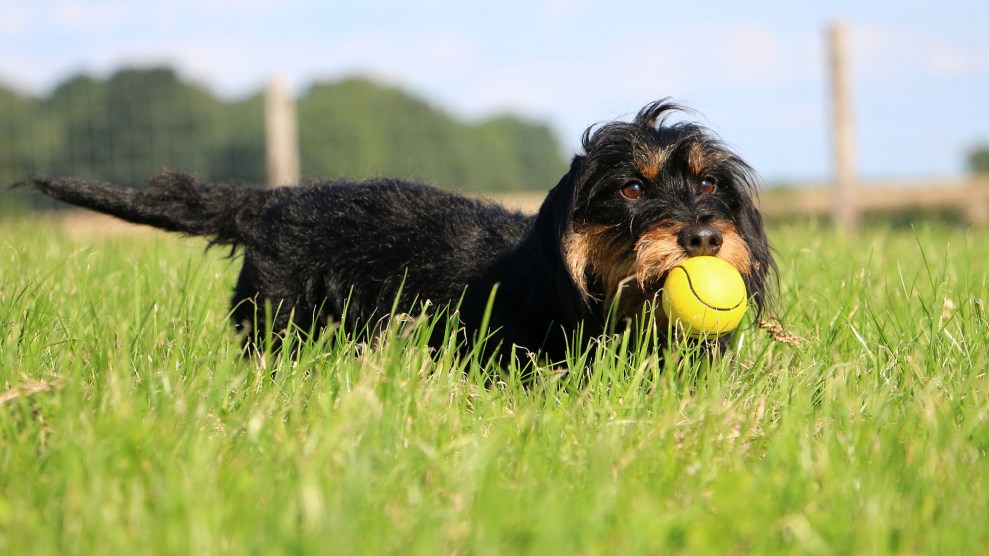 Are you a dog that doesn’t want Lyme disease? Well, you’re in luck! These vaccines will let you run through tall grasses with only a slight risk of catching Lyme.

If you’re a human, on the other hand, obey the experts and check behind your ears and knees, because there’s no vaccine on the market for you. At least, not since 2002.

That’s right: Lyme disease—notoriously difficult to spot and treat, and diagnosed in about 300,000 Americans every year—had a vaccine, but it’s no longer available to the public.

Spread via infected ticks, Lyme disease is notoriously difficult for patients to spot. While some develop the disease’s distinctive bulls-eye rash upon infection, others display symptoms that could be mistaken for the flu, like fever, headaches, and joint pain. When caught early, it’s usually cured with antibiotics. In a fraction of cases, though, the disease lingers, in what’s known as chronic Lyme, or Post-Treatment Lyme Disease Syndrome. (Many doctors argue there is little evidence that the symptoms ascribed to chronic Lyme actually come from Lyme-infected ticks and not from some other disease or infection.)

When the FDA looked at the data, it found no evidence that the vaccine caused arthritis or other reported adverse effects.

There used to be a Lyme vaccine.

In December 1998, LYMErix—a vaccine for Lyme disease developed by pharmaceutical giant SmithKline Beecham—gained approval from the Food and Drug Administration. The vaccine worked by producing antibodies in someone bitten by an infected tick. Those antibodies would go to the tick’s gut and kill the bacteria, thus preventing infection.

The immunization you can now give your puppy is essentially this original vaccine, says Stanley Plotkin, a professor and consultant who literally wrote the book on vaccines, and whose son almost died from cardiac Lyme disease. It’s hard to say exactly how many dogs contract the illness; by some estimates, a quarter of dogs in endemic regions have Lyme disease; others put that figure between 41 and 73 percent. Cats can get it, too.

Animal vaccines are regulated by the US Department of Agriculture, not by the Food and Drug Administration, and the American Animal Hospital Association recommends the vaccination for dogs in areas where Lyme is common. (There is no Lyme vaccine for cats.) “I’m not a veterinarian, but as far as I’ve been told, the vaccine works. The dogs don’t seem to suffer from it,” says Plotkin. “It’s a bizarre situation, in a way.”

But the vaccine had its drawbacks.

LYMErix required three doses spaced out over the course of a year, and it was far from perfect. It had an efficacy of just less than 78 percent. (For contrast, the vaccine for hepatitis B is 95 percent effective, and the measles vaccine is 97 percent effective after two doses.) According to Plotkin, the vaccine was not generally reimbursed by insurance companies.

Another major flaw in LYMErix’s development was that it wasn’t tested in—and thus not approved for—children under 15; children happen to have the most confirmed cases of Lyme.

Still, a 78 percent effective vaccine is better than a mere tick-check. So why didn’t the shot catch on? Some people think it was a PR problem. For starters, the vaccine was marketed directly to consumers instead of doctors. “If a doctor says, ‘You do gardening and you live in a Lyme disease area, and you should be vaccinated,’ they’re likely to accept it,” says Plotkin. “If they go the the physician and say, ‘What about the Lyme vaccine?’ and the physician’s like, ‘I don’t know anything about it,’ it’s quite a difference.”

What’s more, the Advisory Committee on Immunization Practices, which is part of the Centers for Disease Control and Prevention and issues federal vaccination guidelines, made a fairly weak recommendation for LYMErix. Plotkin believes that was because “most of the people on the committee were ignorant about Lyme disease.” Some skeptics like Pat Smith, president of the Lyme Disease Association for more than two decades, believe it’s because the FDA wasn’t fully confident in the vaccine’s safety. She points to the chairwoman of the FDA committee that approved LYMErix, who acknowledged at the time that ”it’s rare that a vaccine be voted on with such ambivalence and a stack of provisos.”

Smith remembers being excited when she first heard about the vaccine: Finally, there was a way to prevent the disease that had infected two of her daughters. But then people came to her claiming LYMErix had given them arthritis and other illnesses. “It’s something that they never had until they got the vaccine,” she says.

Many of these so-called “vaccine victims” banded together to sue SmithKline, alleging LYMErix was linked to debilitating joint pain and muscle weakness in more than a hundred people, and calling on the FDA to revise the vaccine’s warning label to highlight the potential for adverse reactions. More than a dozen people submitted testimony to the FDA with tales of post-vaccination arthritis, muscle aches, and light-headedness. As Plotkin puts it, the “victims” believed that “the vaccine was like being bitten by an infected tick,” in that the symptoms people claimed to have suffered as a result of the vaccine were similar to those of Lyme.

When the FDA looked at the data, however, it found no evidence that the vaccine caused arthritis or other reported adverse effects. Still, LYMErix sales fell dramatically.

So it got pulled.

In February 2002, just over three years after receiving FDA approval, GlaxoSmithKline (renamed after a corporate merger) decided to withdraw LYMErix from the market, citing poor sales. The following year, the company settled the class-action suits.

How about a do-over?

Many believe a Lyme vaccine is needed now more than ever; according to one study by the CDC, the number of counties with a high incidence of Lyme has nearly quadrupled since the mid-’90s. And researchers at Johns Hopkins have found that Americans shell out up to $1.3 billion per year to treat it.

That may be why Valneva, a small European biotech company, recently got fast-track status from the FDA for the development of its Lyme vaccine, which it hopes will thwart 98 percent of Lyme strains on both sides of the Atlantic. The first human trials are underway in the United States and Europe—which sees around 85,000 Lyme cases each year—and phase two of those trials should begin early next year.

What’s preventing Valneva’s vaccine from succumbing to the same pitfalls as LYMErix? While Thomas Lingelbach, president and CEO of Valneva, says it’s too early to draft storyboards for TV spots (he anticipated the vaccine wouldn’t hit the market until 2023, though the fast-track designation may speed up that timeline), he is aware of LYMErix’s missteps in the PR department. “Acceptability and penetration of a vaccine has a lot to do with public opinion,” he says, “which is not necessarily analytically objective.”

So Valneva hopes to do things differently. First, it will work more closely with government agencies and recommendation bodies like ACIP to ensure that, should the vaccine work, it has the full power of the government behind it. The company also plans to educate doctors on Lyme disease and the need for a vaccine, especially in areas like New England and the Upper Midwest, where Lyme is most prevalent.

Valneva’s also taken measures to quell the fears of vaccine skeptics, avoiding “even any perception” that the vaccine might not be safe, says Lingelbach. The FDA ultimately concluded that LYMErix didn’t have the sweeping adverse effects that “vaccine victims” claimed. Still—calling to mind how thimerosal was reduced or removed from vaccines in 1999 after some claimed the preservative caused autism, even though the CDC concluded it didn’t—Lingelbach says Valneva has designed the new vaccine without the epitope (or protein segment that attracts antibodies) that LYMErix opponents believed was most closely linked to arthritis.

Plotkin is hopeful for Valneva’s effort, and Smith is skeptical. But perhaps in a few years—after further testing and some smart PR—humans can be as safe from Lyme as their dogs.