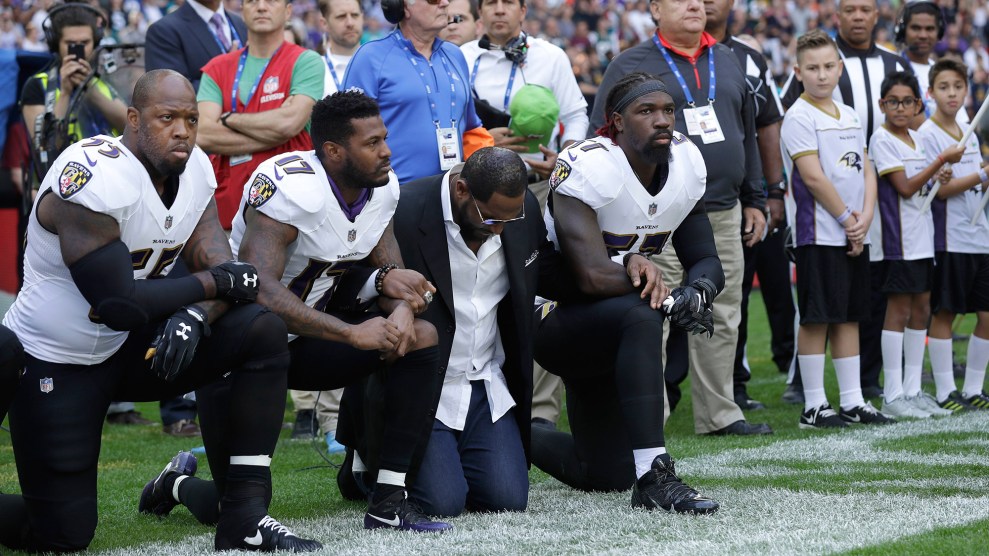 Baltimore Ravens outside linebacker Terrell Suggs, from left, Mike Wallace, former player Ray Lewis and inside linebacker C.J. Mosley kneel down during the playing of the U.S. national anthem at Wembley Stadium in London.Matt Dunham/AP

Scores of NFL players linked arms and kneeled in defiance as the national anthem blared in stadiums across the country today, just two days after President Donald Trump criticized one of their own. Some didn’t participate in the national anthem at all, choosing to stay in their locker rooms, while the NFL’s only Muslim owner went beyond the team statement and stood on the field beside his players in protest.

Current and former athletes, from Cleveland Caveliers star LeBron James to Seattle Seahawks wide receiver Doug Baldwin, lashed out after Trump called on NFL owners to fire players who protest during the national anthem at a rally in Alabama on Friday night.

“Wouldn’t you love to see one of these NFL owners, when somebody disrespects our flag, to say, ‘Get that son of a bitch off the field right now, out, he’s fired. He’s fired!” Trump told the crowd, alluding to former San Francisco 49ers quarterback Colin Kaepernick, whose kneeling during the anthem to condemn police violence and racial injustice last season inspired others to join in protest.

On Saturday night, Oakland A’s rookie catcher Bruce Maxwell, whose father was in the US army, became the first Major League Baseball player to take a knee during the national anthem. He explained to reporters why he joined in on the protests.

A’s Bruce Maxwell just took a knee during anthem. He is the first in #MLB to do it. @sfchronicle @SFGate #baseball #Oakland #athletics pic.twitter.com/xJMeAskC4z

Here are Bruce Maxwell's words. The rest can be found in @susanslusser's story: https://t.co/iJv9S396MA pic.twitter.com/smRIwqdOjj

More than a dozen members of the Baltimore Ravens and Jacksonville Jaguars took a knee during the US national anthem when the two sides faced off in London, England. Jaguars owner Shad Khan, who contributed $1 million to Trump’s campaign last year, locked arms with his fellow players and called it a privilege to stand with his players. “We have a lot of work to do, and we can do it,” Khan said in a statement, “but the comments by the President make it harder. That’s why it was important for us, and personally for me, to show the world that even if we differ at times, we can and should be united in the effort to become better as people and a nation.”

Shad Khan, the Jags owner who stood next to players with their arms interlocked, released this statement: pic.twitter.com/fcxO09BvCX

Hours before their game against the Chicago Bears, Pittsburgh Steelers head coach Mike Tomlin told CBS that the team would stay in the locker room during the national anthem.

Mike Tomlin just told me @NFLonCBS #Steelers will NOT be participating in the #NationalAnthem today in CHI. Staying in the locker room.

Mike Tomlin. No players behind him. pic.twitter.com/GYR0M4EyvR

Alejandro Villanueva was the lone Steelers player to come out during the national anthem pic.twitter.com/Jl7id3EGnk

Whole bunch of Patriots players are kneeling. There are some boos in the crowd pic.twitter.com/nLkc6TeQRh

Boos and chants of "Stand up!" As the anthem begins with a few Patriots taking a knee in front of bench.

Singer Rico Lavelle raised a fist and took a knee at the end of his national anthem performance before the Detroit Lions and Atlanta Falcons game.

Falcons-Lions national anthem singer Rico Lavelle took a knee and raised his fist at the end of his performance: pic.twitter.com/JwrTP94ySD

Here are eight members of the Detroit Lions kneeling. Many broadcasts apparently didn't show much of the protests. #TakeAKnee pic.twitter.com/mAZobqaKl7

Several #Colts and #Browns players taking a knee during the national anthem – several boos from the crowd @WISH_TV pic.twitter.com/16q8sbn5EV

The Redskins stand with linked arms – some players are kneeling – as most of the Raiders sit during the national anthem pic.twitter.com/cFrz0E9PaF

Not a single player from the Titans or the Seahawks participated in the National Anthem just now. pic.twitter.com/yskxkpFYL0