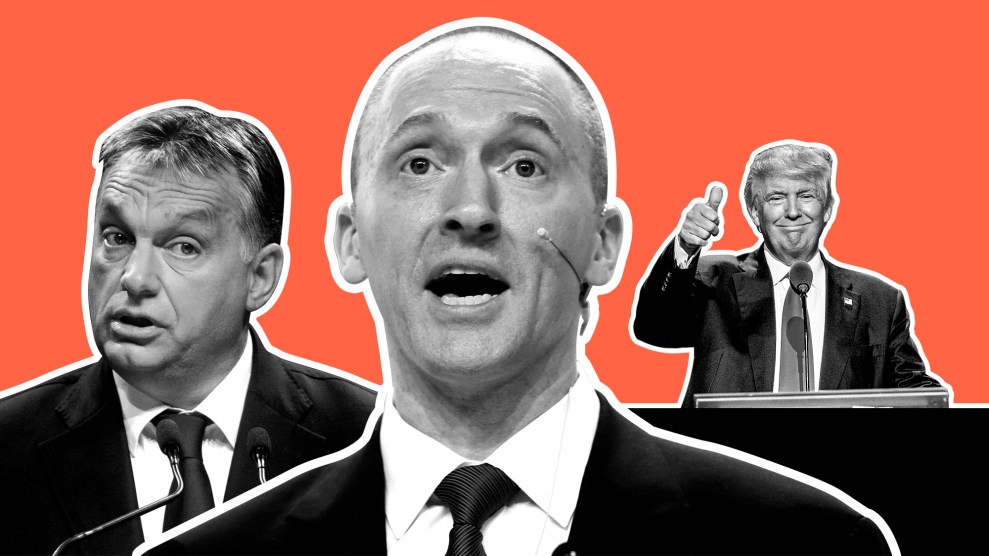 What was Carter Page up to in Budapest? Among the notable nuggets in the 243-page transcript of his recent interview with the House Intelligence Committee is discussion of Page’s August 2016 trip to the Hungarian capital. Page met there with Hungarian officials including the nation’s ambassador to the United States and another Hungarian government official whom Page conceded might have been a spy. Committee Democrats, according to the transcript, seemed highly interested in this episode.

Page, a little-known energy consultant who became a foreign policy adviser for Donald Trump’s campaign, has spent much of the last year disputing allegations that he participated in any Trump campaign collaboration with Russia—while being somewhat squirrelly about the contacts he did have with Russian officials. He reportedly had his own communications surveilled by US intelligence, presumably because he was interacting with Russian officials. He plausibly has asserted he was under American surveillance during the Budapest visit. But even if the trip was innocent, as Page claims, the committee’s examination of his Budapest connection highlights the extensive efforts made by the far-right government of Hungarian Prime Minister Viktor Orbán to cozy up to Trump—and the mixed but meaningful results that this outreach has yielded for a Hungarian government widely denounced as autocratic and reactionary.

Page told the Intelligence Committee that he traveled to Budapest in late August for “a long weekend” that included a meeting with Réka Szemerkényi, the Hungarian ambassador to the United States at the time. Page had met Szemerkényi the previous month at the Republican National Convention and says he accepted her offer to visit Hungary.

In Budapest, Page met with Szemerkényi and, according to his testimony, other “representatives from the Hungarian government.” He told the committee he could not recall the names of the other government officials or details of the discussions, prompting Rep. Adam Schiff (D-Calif.), the top Democrat on the committee, to question Page’s “extraordinarily vague” answers. “You plan a trip to Budapest after meeting with the Hungarian ambassador, but you can’t recall any specifics about what you discussed or why you’d be traveling there to meet with her?” Schiff asked.

Page said he could not even remember the name or job of another Hungarian foreign policy official with whom he remained in touch after the trip. “Do you know whether he was with the Hungarian intelligence?” Schiff asked. Page responded by paraphrasing indicted former Trump campaign chairman Paul Manafort’s infamous response to questions about his possible contacts with Russian intelligence agents. “People don’t wear badges,” Page said, before adding that as far he knew this official was not an intelligence agent.

Whether or not Page’s trip had a clandestine component, his presence in Budapest was part of an above-board Hungarian influence campaign. On July 23, 2016, the day after Trump accepted the Republican presidential nomination, Orbán offered an endorsement of Trump. That was an extraordinary step for a foreign leader. Heads of state typically avoid supporting a particular presidential candidate during an election. The prime minister, who clashed with the European Union over his efforts restrict the flow of refugees into Hungary (which includes construction of border fencing), said Trump’s anti-immigrant rhetoric and support for Hungary’s own measures offered “what Europe needs.”

In recent years, Orbán has triggered international condemnation for mistreating refugees through steps such as keeping them in pens and using tear gas and water cannons on migrants, including children, attempting to enter Hungary. Orbán has also attempted to crack down on nongovernmental organizations and a university funded by billionaire investor George Soros, who was born in Budapest, and other independent institutions, drawing condemnation from Europe and the United States. In 2011, Hillary Clinton, while secretary of state, voiced American concerns about corruption within Orban’s government and threats to press and judicial independence. In his remarks backing Trump, and in subsequent statements, Orbán said he expected Trump to lay off such lectures.

Szemerkényi, who would later brag of having meetings with Trump before and after his inaugural, in the summer of 2016 appears to have seen Page as a conduit to a possible Trump administration. Page reluctantly conceded during his testimony that she invited him to Hungary at least partly because of his connection to the Trump campaign. He told the committee he and Szemerkényi had discussed “general perspectives on Europe and international relations and foreign policy.” But Hungary had quite specific hopes for the Trump administration.

What Orbán’s government, according to a person familiar with the country’s foreign policy strategy, wants most of all is respect from the United States. That means an end to criticism of Orbán’s moves to centralize power and some sort of face-time with Trump.

Orbán’s office has retained former Rep. Connie Mack (R-Fla.) as a lobbyist to win support in Washington, paying two separate limited-liability companies Mack controls about $70,000 per month combined. After Trump’s election, Mack began reaching out to Republican congressmen and members of the Trump administration, according to a foreign lobbying disclosure form Mack filed in May. Mack promoted Orbán’s support for Trump in meetings with dozens of House Republicans and aides. His first reported executive branch contact, notably, was with Sebastian Gorka, then a White House national security aide, whose parents are Hungarian and who has ties to right-wing Hungarian political groups. Mack also had multiple contacts with Matt Mowers, a former Chris Christie aide who was working at the State Department, and in February he sent an “email inquiry” to Vice President Mike Pence. Pence’s office, Gorka, and the State Department did not respond to requests for comment.

In a written response to questions, Mack said that “similar visions on economic and tax policy, national sovereignty, family values, border security, as well as the recognition that the government has a responsibility to protect its own citizenry above all else creates a compatible ideological platform that can be used to further strengthen relations at all levels” between Hungary and the United States.

Mack has repeatedly distributed to congressional Republicans and administration officials a document stating that Orbán was “the first and only European Head of State to publicly endorse Donald Trump.” And Orbán has regularly expressed ideological affinity with Trump, particularly on immigration policy. To justify his own harsh stance against accepting refugees in Hungary, Orbán in a January 23 speech cited the new US president: “We have been given permission, if you like, from the world’s highest secular position, that we, too, can place our interests first.” Mack passed around copies of this speech in Washington. In February, Mack distributed a statement in which Orbán called European criticism of Trump’s ban on refugees from majority-Muslim countries “neurotic.” The United States “has the right to determine its own border, foreign and migration policies,” Orbán insisted.

Orbán’s outreach to Trump, though, has not yet resulted in a great deal. It has not yet led to a Trump-Orbán one-on-one meeting, which Orbán has claimed Trump promised when the Hungarian leader called Trump to congratulate him after the 2016 American election. Worse for Orbán, Trump’s June meeting with President Klaus Iohannis of Hungary’s neighbor and longtime rival, Romania, was considered a major snub in Hungary. In June, the State Department condemned a new law widely seen as targeting the Budapest university founded by Soros. That is the kind of public rebuke Orbán hoped his ties to Trump would prevent.

Still, Trump has made clear he appreciates Orbán’s support. He exchanged fulsome letters with Orbán after his inauguration, and the leaders have spoken by phone, in addition to meeting informally at a “number of gatherings,” Mack said. “The Hungarian government completely understands the complex and pressing nature of the problems that President Trump must face on a daily basis,” Mack said, and thus “is not disappointed that a presidential meeting will take place at a later date.”

A person familiar with the Hungarians’ efforts said they have also shrugged off the State Department’s condemnation. That’s because they expect more friendly Trump appointees to soon replace Obama administration holdouts who still run State’s Europe desk. The Hungarians “are looking forward to when some of the new folks make it into the building,” the person said.

Perhaps most importantly, Trump has praised Orbán and stayed silent on the Hungarian crackdown on civic institutions. Hungarian critics say that this has emboldened the far-right leader to move more aggressively. And Hungary says Trump recently reiterated his pledge to meet with Orbán.

It’s unclear whether Page’s trip to Budapest paid off for Orbán—much about Page’s actions remain unclear. But the Hungarian government is continuing to lobby the Trump administration and Congress to protect its authoritarian ways.