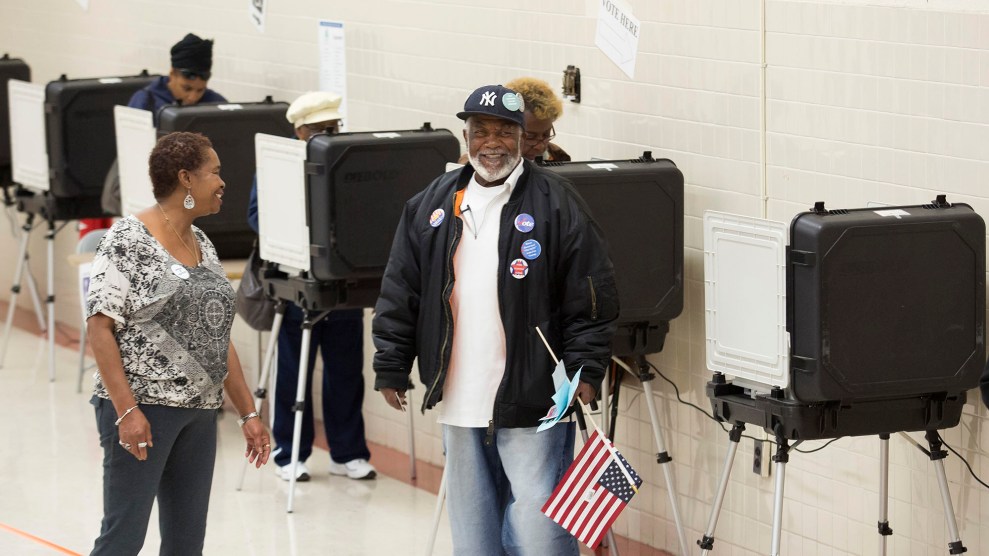 But Virginians with criminal records might get the last word, because for the first time in a long time, a huge group of ex-felons will help pick the state’s next governor.

Virginia is one of four states that permanently disenfranchise people with felonies, even after they’ve served their sentences. While the state’s governor is allowed to restore individuals’ right to vote, last year Democratic Gov. Terry McAuliffe shocked conservatives by signing an order restoring rights to more than 200,000 people who had completed their sentences and parole. Republican lawmakers successfully sued to block the move, arguing that he lacked authority to restore rights en masse. So McAuliffe’s administration started handing out the orders one by one; more than 168,000 ex-offenders have since had their voting rights returned. About 42,000 of them have registered to vote.

“That’s a large chunk of people we’ve added back to the electorate,” says Marcia Price, a member of Virginia’s House of Delegates and a campaign co-chair for Lt. Governor Ralph Northam, the Democratic gubernatorial candidate.

Of the former felons who have recently had their rights restored, nearly half are black. Before McAuliffe’s historic announcement last year, about 1 in 5 African Americans in the state could not vote because of their criminal records.

A massive effort is underway to mobilize the potential new voters. Ex-offenders have hit the streets to register others like them to vote, often teaming up with community groups. “There’s a lot of work being done to make sure they’re planning to be a significant part of this election,” says Price, who also directs a voter engagement project with the nonprofit New Virginia Majority that has targeted ex-offenders.

In Richmond, few people have registered as many felons to vote as Muhammad As-saddique Abdul-Rahman. The 54-year-old was himself most recently released from prison in 2002—he went in for the first time as a teenager on felony robbery charges. After getting out, he struggled for years with homelessness and alcoholism. But things changed after he got sober, and again the day McAuliffe announced his rights were restored.

That night he went online to register to vote, and the next day he set out to register others. “I went to Monroe Park, where they have breakfast for the homeless and I knew there were a lot of ex-offenders,” he says. “I went to drug houses, to the neighborhoods I grew up in, the neighborhoods I had lived in. I went to AA meetings, different churches, soup kitchens.” Within a few weeks, he says he had registered some 500 people. Hoping to turn his sudden calling into a career, he searched online for voter registration jobs and stumbled upon a phone number for New Virginia Majority; the group hired him as a full-time staffer. Abdul-Rahman estimates he has now personally registered about 2,000 people.

Last week, felon voting rights became a campaign issue after Gillespie launched a television ad claiming that the McAuliffe and Northam administration’s reenfranchisments had made it easier for violent criminals and sex offenders to buy guns and serve on juries. McAuliffe quickly defended his rights restoration process, which he has described as one of his greatest accomplishments in office. “This is a page right out of Donald Trump’s playbook,” the governor said of the ad. “He’s gone into the gutter one more time.”

With the November 7 election fast approaching, the stakes are high—and not just for the candidates: The next governor, like McAuliffe, will have the authority to decide whose rights are restored and whose aren’t. While Northam has pledged to carry on McAullife’s legacy, Gillespie would not: The state’s last three Republican governors together restored fewer than 9,000 felons’ voting rights. Gillespie has also signaled he would work with Republican state legislators who have proposed changing the state constitution’s rules on felon voting.

While Gillespie has discussed establishing a formal process under which some ex-felons could obtain the right to vote, he has spoken out against broader reenfranchisement. “Virginians who have paid their debt to society and are living an honest life should have their rights restored,” he said in his television ad. “But Ralph Northam’s policy of automatic restoration of rights for unrepentant, unreformed, violent criminals is wrong.”

Ed Gillespie will turn the really bad Virginia economy #'s around, and fast. Strong on crime, he might even save our great statues/heritage!

About 20 states have made it easier for felons to vote over the past two decades, though only two—Maine and Vermont—allow them to vote in prison. Virginia is one of four states, including Kentucky, Florida, and Iowa, that permanently disenfranchise people with felonies. During the last legislative session, in response to McAuliffe’s actions, Republican lawmakers unsuccessfully tried to amend Virginia’s constitution to reduce the governor’s power to restore rights. Hundreds of people, including many ex-offenders, reportedly packed the committee room to oppose a state Senate bill that would have prevented violent felons from ever voting again. (A rival House proposal would have allowed violent felons to petition for their voting rights after a waiting period.)

And while both bills would have established a path for nonviolent felons to obtain voting rights, they would have also created hoops—requiring ex-offenders to first pay restitution and fees connected with their convictions. “They’re trying to implement these old Jim Crow laws—you have to pay to get your rights back,” says Christopher Rashad Green, 57, who voted in 2016 after getting his rights restored, and who showed up at the Legislature to lobby against the proposals.

People with criminal records worry the Republican amendments will have more success under Gillespie, who supports requiring felons to pay restitution before restoring their rights. After his ad aired last week, Gillespie spoke on a press call with Del. Greg Habeeb, the lawmaker who had introduced the House bill.

“The majority of people who are incarcerated, they come home and are in dire straits, just trying to take care of the basics,” Rashad Green tells me. He says it takes time to pay off fees—he’s steadily chipping away at his own conviction-related payments while working full time as a community organizer and canvassing ahead of the election. “I’m living proof that there are thousands of people who come home and lead productive lives—why should we have to wait just because we made a few mistakes in the past?”

Of the former felons that New Virginia Majority helped register to vote last year, a spokeswoman says three-quarters cast a ballot in the 2016 presidential election. That’s high, considering that only 55 percent of all voting-age Americans turned out. If Virginia continues registering ex-offenders to vote, Abdul-Rahman is hopeful the state’s political landscape will shift. “Many areas would go Democratic overnight,” he says.

But Democrats shouldn’t take felons for granted, he says, because they’re organized, and ready to challenge any elected official who does not make it easier for ex-offenders to restore their civil rights. “One of the things those felons who had their rights restored do is vote,” he says. “And the ones who vote, they pay attention. We won’t be ignored anymore.”