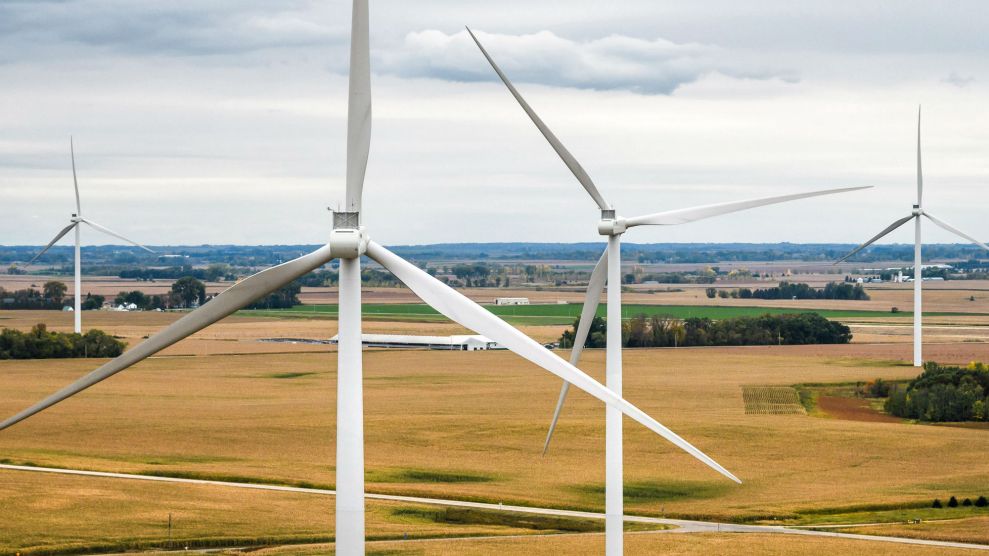 “The president and myself, we don’t pick winners and losers,” President Donald Trump’s Interior Secretary Ryan Zinke said this spring. Speaking at a conference billed as “the largest event in the world for the oil and gas industry,” Zinke insisted that while the administration supported fossil fuel development, neither he nor Trump would stack the deck in the industry’s favor. “We don’t favor oil and gas over any other industry,” he said. “We just want to make sure the field is even and America can use its resources.”

The Republican-controlled House of Representatives doesn’t follow that mantra—at least if its bill proposing to overhaul the American tax system is any indication. While preserving $15 billion in tax subsidies for the fossil fuel industry, the bill would slash incentives for renewable energy and the electric car industry. Environmental groups are frantic. A coalition of 17 groups sent a joint letter to House members on Wednesday assailing the hypocrisy: “Despite rhetoric from GOP leaders that the tax code shouldn’t pick winners and losers, this bill very clearly picks polluting energy sectors as winners yet again, putting at risk the impressive growth of clean energy and robbing us and our children of a cleaner future.”

The House provision raising the most ire are proposed changes to the renewable electricity production tax credit, which benefits producers of wind, solar, geothermal and other types of renewable energy. Already scheduled to be phased out by 2020, the PTC would be cut by more than a third under the House bill. An analysis by Clearview Energy Partners said the proposal could reduce the credit’s value by up to 45 percent.

“Despite rhetoric from GOP leaders that the tax code shouldn’t pick winners and losers, this bill very clearly picks polluting energy sectors as winners yet again, putting at risk the impressive growth of clean energy and robbing us and our children of a cleaner future.”

This week, the CEO of TriGlobal Energy—a utility-scale wind developer based in Texas—sent a letter to House Speaker Paul Ryan, urging him to reconsider. “With the PTC in place, we have created a world-class wind development company, enticing hundreds of millions of dollars in domestic and international investment,” he wrote, noting that Congress had already promised to keep the credit in place until 2020. “If Congress goes back on its promise, investment and jobs go away, and business incentive for the U.S. wind industry will be greatly diminished.”

Solar energy companies don’t fare much better. The House GOP plan would also repeal the Investment Tax Credit for big solar projects that start construction after 2027. House Republicans also propose eliminating the $7,500 credit for electric vehicle purchases, which analysts say “could cripple the emerging EV market.” Along with the proposed changed to the PTC, “these changes would increase pollution and undermine America’s leadership in energy innovation,” said Michelle Robinson, director of the clean vehicles program at the Union of Concerned Scientists. “We’d squander the progress we’ve made.”

The Senate’s bill, the broad outlines of which were released on Thursday, isn’t likely to include all of these anti-clean energy measures. Three Republican members of the Senate Finance Committee—the committee that writes the tax bill—told Bloomberg this week that they oppose scaling back the wind production tax credit. “The wind energy production tax credit is already being phased out under a compromise brokered in 2015,” Republican Senator Chuck Grassley, from wind-rich Iowa, said. “It shouldn’t be re-opened.” And the electric vehicle credit reportedly is preserved in the Senate bill.

But the House’s proposed change to the wind energy tax credit doesn’t have to become law for it to negatively impact the industry. “The sad thing is, it creates uncertainty in the marketplace, just the fact that this proposal is out there,” Greg Jenner, a Stoel Rives tax attorney who works with renewable energy companies, told Greentech Media. If investors are unsure if the credit will remain robust, they may choose to invest elsewhere. This type of financial uncertainty has long plagued the wind industry, as Congress has been required to renew the credit every few years—and the debate is always contentious. Needless to say, fossil fuel companies don’t face the same uncertainty about their own generous government subsidies.

“Beyond propping up their business model, it’s the ultimate greenwashing scheme, allowing [fossil fuel companies] to portray themselves as responsible environmental stewards.”

While the Senate bill may not include all of the House’s cuts to clean energy, it could expand an existing subsidy for fossil fuel companies. Morning Consult reports that Republican Senator Shelley Moore Capito of West Virginia wants to extend and expand the carbon capture tax credit, which benefits fossil fuel companies that capture their greenhouse gas emissions before they’re released into the atmosphere and store them in the ground.

This politics of this proposal are complicated. The credit incentivizes fossil fuel companies to reduce their carbon emissions, helping in the fight against climate change. It is supported by some of the Senate’s most vocal climate champions—Rhode Island’s Sheldon Whitehouse and Hawaii’s Brian Schatz, both Democrats—as well as some large environmental groups such as the Natural Resources Defense Council and the Clean Air Task Force.

Other progressives and environmentalists, however, note that it benefits the fossil fuel industry. “This would essentially be a new oil subsidy,” said Lukas Ross, a climate and energy campaigner at Friends of the Earth. “It is not our idea of what effective climate policy should look like and does nothing for communities that are directly affected by extraction.” Anthony Rogers-Wright, the U.S. Coordinator for The Leap, takes his criticism a step further: “Beyond propping up their business model, it’s the ultimate greenwashing scheme, allowing [fossil fuel companies] to portray themselves as responsible environmental stewards.”

There was never much reason to believe the Trump administration’s rhetoric on energy-sector equality. The day after Zinke promised not to pick winners and losers, Trump appointed a known renewable-energy critic to lead the Department of Energy’s renewable energy office. Now, House Republicans have made clear that they, too, want to tip the scales in favor of the fossil fuel industry. Any hope of saving renewable-energy credits now rests with the Senate.