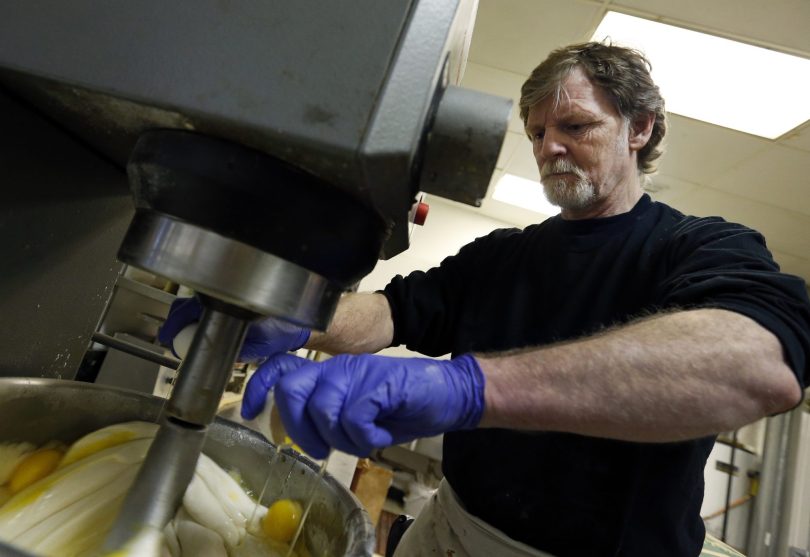 Are LGBT people regular victims of discrimination, or are they a well-funded political force bent on persecuting Christians? Those are the competing ideas at work in a host of briefs filed in a blockbuster case the Supreme Court will hear Tuesday that has huge implications for the future of civil rights protections.

The case, Masterpiece Cakeshop v. Colorado Civil Rights Commission, pits a Colorado baker, Jack Phillips, against Charlie Craig and David Mullins, a gay couple who asked Phillips to make them a wedding cake. Phillips refused, on the grounds that same-sex marriage violated his deeply held religious beliefs. In 2013, Mullins and Craig filed a complaint with the state government, alleging that Phillips had violated Colorado’s anti-discrimination statute. After an investigation and hearings, the Colorado Civil Rights Commission ruled in their favor. The state court of appeals upheld the decision, and the Colorado Supreme Court declined to review that decision, setting the stage for Phillips’ petition to the US Supreme Court.

Civil rights groups say that if the high court rules in Phillips’ favor, it will open the floodgates to a rash of discrimination against LBGT people, as well as women and people of color, under the guise of religious freedom. Phillips’ lawyers counter that these fears are overblown and that it’s rare for LBGT people to be denied service, particularly for religious reasons. In a brief to the court, they cite a law review article asserting that “hardly any of these cases have occurred: a handful in a country of 300 million people.”

Concerned Women for America, a conservative Christian women’s advocacy group, argues in an amicus brief on Phillips’ behalf that, far from being an oppressed group, the LBGT community is a well-funded and powerful political force, with backing from some of the world’s richest companies—not to mention from Lady Gaga. “The economic powers that support LGBT rights are the most powerful in the world,” the group writes. “This evidence shows the current business landscape strongly favors LGBT protections. Given that environment, it is inconceivable that other businesses would rush to avail themselves of the narrow protections Petitioners are asking for here.”

One organization argues that far from being an oppressed group, the LBGT community is a well-funded and powerful political force, with backing from some of the world’s richest companies—and from Lady Gaga.

In response, the Lambda Legal Defense and Education Fund, a LGBT civil rights group, has filed an amicus brief that offers up testimonials from LGBT people showing the myriad ways in which they are treated as second-class citizens in a variety of common settings. The brief cites more than 1,000 examples of real people who have suffered humiliating denials of service in doctor’s offices, pet stores, barber shops, swimming pools, and post offices.

Their stories include: a transgender man denied a needed hysterectomy by a Catholic hospital on religious grounds; same-sex parents denied slots in childcare centers; and many, many same-sex couples denied wedding services of every sort. “These testimonials reveal an ugly truth: with disturbing frequency, LGBT people are confronted by ‘we don’t serve your kind’ refusals and other unequal treatment in a wide range of public accommodations contexts,” the brief argues.

Here are some of the most compelling:

M.H., a gay man who went to a New York City hospital suffering a severe infection:

I was treated roughly physically and emotionally and called a faggot on more than one occasion by a health aide. At one point, I was dragged down the hall roughly in an office chair, because they said they were short on beds, and I fell out of the chair…I was left on the floor, where I went into convulsions and urinated on myself. I was later told I had a seizure and a cyanotic episode…I could hear the nurse running toward me yelling that she was going to lose her job over this. The health aide responded: “This junky faggot isn’t going to make you lose your job.”

H.C., one of two moms of a two-year-old who had fallen and knocked out her front tooth and been rushed to see a pediatric dentist in Austin, Texas:

I was at work at the time. When my wife and daughter arrived at the dentist’s office, he asked my wife “who is the real mother?’…My wife…explained that M.C. has two mothers. The dentist told my wife that ‘a child cannot have two mothers’ and said that he would only see the biological mother (me) of our daughter with a birth certificate as proof. My wife called me sobbing, and told me, ‘They want the real mom to be here. You have to come and bring M.C.’s birth certificate before they will treat her.’ I was shocked…We were blindsided by this whole encounter.

S.C., a Missouri woman who went to see her longtime family accountant with her fiancee to get help planning the next year’s taxes as a married couple:

[The accountant’s representative] got a hostile look on her face and stated, “Oh we don’t do that.” I said, “What, taxes for married people?” Then she loudly whispered (while glancing over at the gentleman in the lobby waiting) “Same-Same”…as if to say same-sex couples. I asked to speak with the CPA and after a bit was taken back to his office. One of the first things he told us was “We are a Christian organization.”…[H]e didn’t feel he could sign a tax return attesting to us being a married couple due to his religious beliefs. This left my fiancée in tears.”

M.A., a rideshare customer who had summoned a driver who was also an evangelical pastor:

I was on my way in a Lyft to Shabbat lunch. My driver…noticed my yarmulke and told me I should not be riding in a car on Saturday because it makes me a bad Jew. The comments continued after the driver noticed a rainbow flag stitched to my yarmulke. “Good Jews don’t have sex on Shabbat.”…[He] added “the Bible forbids gay sex” along with a slew of homophobic slurs…[T]he insults lasted for about eight minutes until the driver pulled over sharply and kicked me out—about a half-mile from my destination.

On several occasions, I was asked by nurses and orderlies intrusive questions about my genitals as well as other inappropriate questions about my transgender status. When I complained…, a nurse told me that I should just “expect to be treated like this.” On multiple occasions, they made me sleep on the hallway floor rather than in a room, and when I was finally given a room, it was an isolation room…I was also prevented from using the bathroom for hours at a time…[and] denied use of [my electric shaver] for a week, which caused me to grow a beard. The staff of the facility discussed my transgender status loudly…, and as a result, within the first couple days of my arrival all of the patients around me knew, which caused me to suffer sexual harassment from two male patients.

In its brief supporting Phillips, Concerned Women for America argues that it’s not LGBT people but Christians who are the persecuted party, a problem the group warns will only grow if the court rules in favor of Mullins and Craig. “The trend towards the targeting of Christians who hold a traditional view of marriage will increase exponentially,” the group writes. “As the Court is aware the cases are numerous and continue to grow. Such blatant, intentional and unconstitutional targeting of people of faith cannot be the answer to the states’ efforts to protect discrimination based on sexual orientation. But that is exactly what we are seeing and it is likely to intensify if Respondents arguments [sic] were to prevail.” As proof, the brief quotes Tim Gill, a gay megadonor, who described his plans for work to expand protections for LGBT communities to Rolling Stone, saying, “We’re going to punish the wicked.”

Aside from Gill’s comment, the group’s evidence of Christian persecution is thin. Unlike the personal stories told by Lambda in its brief, CWA’s brief offers up only a Michigan farmer who was briefly kicked out of a local farmer’s market because he refused to allow a same-sex wedding to take place on his farm. (After a lawsuit, a federal judge in September ordered the market to take the farmer back, and the city declined to appeal the decision.)

The rest of CWA’s evidence comes from Facebook comments directed at a Washington state florist that had refused to serve same-sex couples and a videographer who wants to deny service to same-sex couples but is banned from doing so by state law in Minnesota. A few of the comments are vulgar, but most are tame. (One sample comment from the florist’s Facebook page cited in the brief: “The owner’s [sic] of this shop are bigots! They use religion to hide their hate.”)

Phillips’ supporters have implored the court not to encourage such animus against Christians by siding with same-sex couples. A brief filed by the Foundation for Moral Law, founded by Alabama Republican Senate candidate Roy Moore, calls on the court to ensure “that those whose consciences will not allow them to participate in same-sex weddings will not be sent a ‘message of exclusion’ that they are now second-class citizens and unwelcome in American society.”

The court is not expected to rule on the case until next spring.