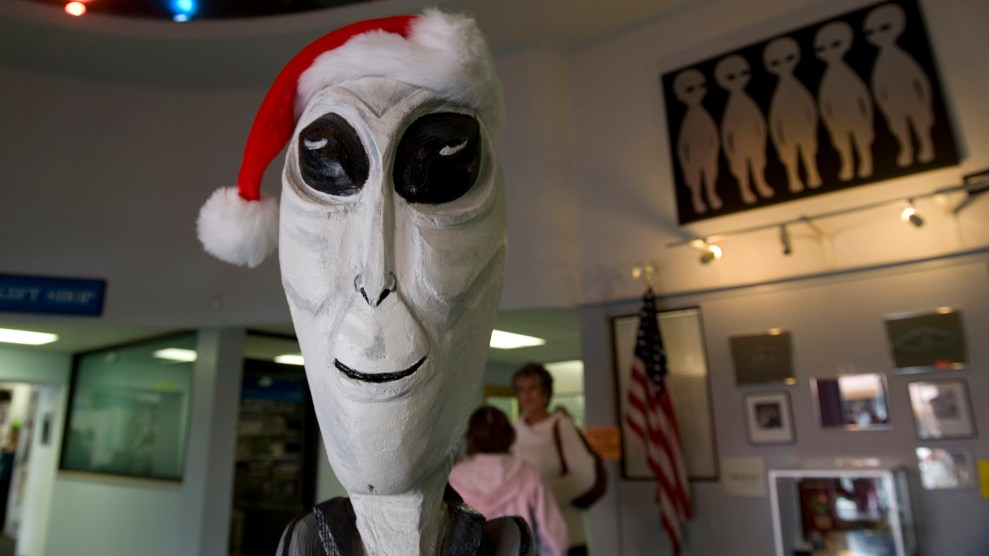 On December 16, UFO researchers and enthusiasts, along with the general public, were treated to an unexpected gift from the New York Times.

In a front-page investigation, the country’s most august news organization grappled with a topic that’s usually relegated to the fringes, detailing a $22 million Pentagon effort to study unexplained aerial phenomena that ran from 2007 to 2012.

“For years the US government repeatedly and very specifically denied that there was official interest in UFOs, when clearly there was.”

“Working with Mr. Bigelow’s Las Vegas-based company, the program produced documents that describe sightings of aircraft that seemed to move at very high velocities with no visible signs of propulsion, or that hovered with no apparent means of lift,” the Times reported. Included with the story were two cockpit videos of mysterious craft released by the Pentagon—one apparently recorded pilots or dispatchers discussing what they were seeing dance before their eyes.

Nick Pope, the former head of the British Ministry of Defence’s UFO research program, tells Mother Jones that the Times story is a “very big deal,” for a variety of reasons.

“The videos are interesting, but the real story is that for years the US government repeatedly and very specifically denied that there was official interest in UFOs, when clearly there was,” Pope says. “There has yet to be an accounting for this. Was it simply a case of the left hand not knowing what the right hand was doing, or did people obfuscate? Or flat out lie?”

Pope also notes that the story lays out how governments can keep such research at arm’s length by farming the work out to contractors, which makes congressional scrutiny more difficult, shields the work from freedom of information requests, and prevents politicians from having to answer for “projects that could be considered somewhere ‘out there,’ and thus politically embarrassing.”

Pope added that Elizondo’s assertions in the piece that he has a successor and that the Pentagon isn’t telling the truth about ending the program in 2012 are likely accurate. “They probably just changed the title again and moved it somewhere else—probably in the private sector,” Pope says.

The bombshell development came on the heels of a year that saw other, more modest steps in governmental disclosure and scientific exploration related to unexplained aerial phenomena and potential extraterrestrial life.

Donald Trump’s 2016 election foreclosed the possibility of a 2017 where a President Hillary Clinton—whose campaign was chaired by John Podesta, an X-Files buff and well-known advocate of declassification of government records related to UFOs—made good on several statements she made during the campaign pledging, national security concerns aside, to publicly disclose as much information as she could.

“Elizondo confirmed that UFOs are a real; they exist, and they have been officially documented.”

But in April, NASA released findings related to plumes of material shooting out of an ocean on Saturn’s moon Enceladus, and other data about one of Jupiter’s moons provided by the Hubble research program. “This is the closest we’ve come, so far, to identifying a place with some of the ingredients needed for a habitable environment,” Thomas Zurbuchen, a senior official with the space agency, said at the time, adding that the “results demonstrate the interconnected nature of NASA’s science missions that are getting us closer to answering whether we are indeed alone or not.” The year also saw NASA develop an ever-growing understanding of “exoplanets”—planets orbiting stars in other solar systems—marking progress in studying and identifying other places in our own galaxy where life is possible.

In October, Tom DeLonge, a UFO enthusiast and the multi-platinum selling former frontman of the pop-punk band Blink-182, introduced the team behind a new research, entertainment, and aerospace research company he co-founded, the To The Stars Academy of Arts & Science. It included former high-level officials from the CIA and the Department of Defense, and scientists from Lockheed Martin. At the launch event, Luis Elizondo, who is involved with the company, briefly described his work at the Pentagon and said that it had convinced him that “the [UFO] phenomena is indeed real.”

In a little noticed October Huffington Post write up of his remarks, Leslie Kean, an author and investigative journalist who has written about UFOs for years and who went on to co-byline December’s Times piece, observed that “Elizondo confirmed that UFOs are a real; they exist, and they have been officially documented, answering a question so many have debated and speculated about for decades.”

The To The Stars Academy aims to educate the public about related issues through research and fictional and non-fiction books and films. “It’s an entertain-and-educate model,” DeLonge told me in March when we discussed his new book, Sekret Machines: GODS (co-authored by Peter Levenda) that he hopes will help humanity accept the possibility that other civilizations exist, and reshape thinking on our place in the universe.

A 400 meter long cigar-shaped interstellar object traveling near our solar system, widely considered to be an asteroid named “Oumuamua,” was closely observed in December and fruitlessly scanned for signs of intelligent life. Its unusually elongated shape had kicked off some speculation it might be an extraterrestrial craft. (Another group of scientists recently suggested it was likely a rare form of frozen comet.)

Pope says the relatively respectful airing of the theory shows just how much attitudes about UFOs and extraterrestrial life have changed over recent years,” he says. “Previously, anyone suggesting an object like this was an alien spacecraft would have been dismissed as a crank, and any media coverage would treat the story as a joke. With Oumuamua, the alien spacecraft theory attracted the attention of a lot of scientists, and the mainstream media. UFOs and aliens are no longer just the preserve of conspiracy theorists and tabloids. Times are changing.”